Tough it out: Arkansas holds off Cincinnati 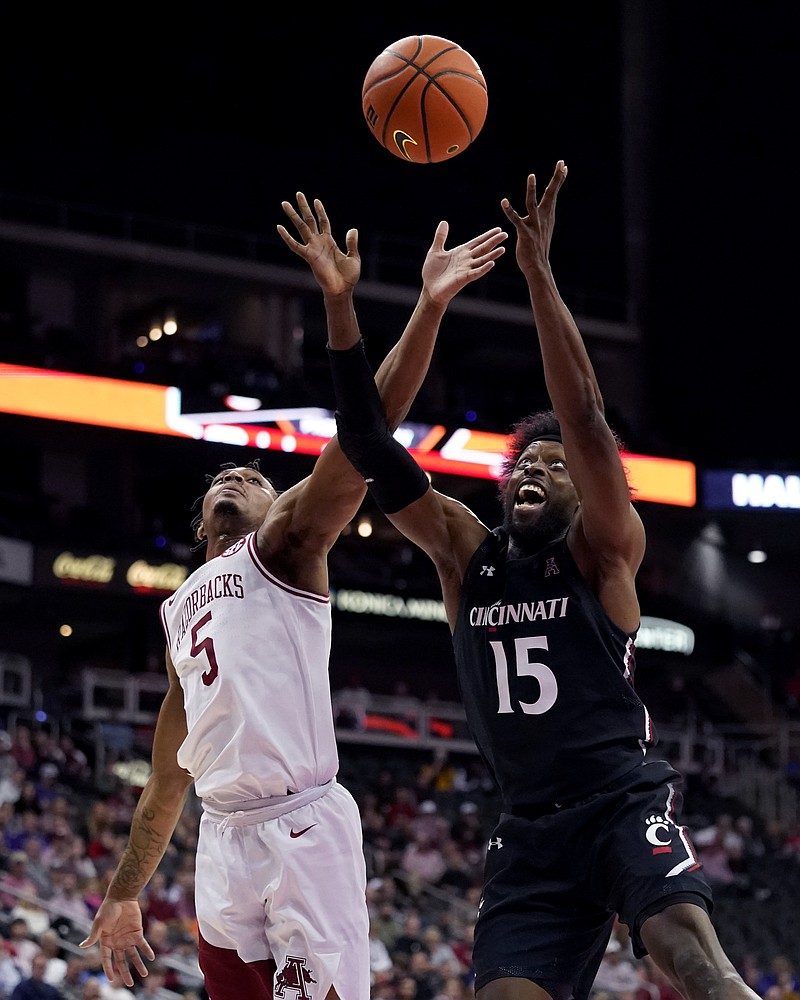 KANSAS CITY, Mo. -- The Arkansas Razorbacks made sure Cincinnati didn't beat another nationally ranked team at the Hall of Fame Classic.

The No. 13 Razorbacks rallied late to beat the Bearcats 73-67 on Tuesday night in the tournament's championship game at T-Mobile Center.

Cincinnati had advanced to play Arkansas by upsetting No. 14 Illinois 71-51 on Monday night.

Senior guard Au'Diese Toney led Arkansas (5-0) with 19 points and nine rebounds. Senior guard Chris Lykes had 15 points for the Razorbacks, including 4 of 4 free throws in the final 21.8 seconds.

Arkansas led 68-67 when Lykes missed a jumper. Davonte Davis got the offensive rebound for the Razorbacks, the Bearcats fouled Lykes and he hit two free throws to make it 70-67 with 21.8 seconds left.

Williams then drew a charge by Jeremiah Davenport with 9.6 seconds left. It was the fourth charge Williams took in the game.

Lykes again was fouled and hit two free throws for a 72-67 Arkansas lead.

The Razorbacks got another stop and Williams hit 1 of 2 free throws with 1.2 seconds left for the final 73-67 margin.

Toney was voted by members of the media as the tournament's most valuable player. He was joined on the all-tournament team by Lykes, DeJulius, Illinois center Kofi Cockburn and Kansas State guard Nijel Pack.

"I know Cincinnati prides themselves on toughness and grit," Musselman said. "They're a really good rebounding team."

But the Razorbacks pounded the Bearcats on the boards with a 46-32 rebounding advantage. They had 18 offensive rebounds -- including six by Toney and three by Williams -- and outscored Cincinnati in second-change points.

"I could not be prouder of our team on the backboards, both offensively and defensively," Musselman said. "From a toughness standpoint, at least through this portion of the season, we're as tough as any team in the country."

Bearcats senior 7-1 center Hayden Koval, a transfer from North Carolina-Greensboro who began his college career by playing at the University of Central Arkansas for three seasons, had six points and two rebounds against Arkansas.

The game featured 14 changes and 11 ties.

The final lead change came when Notae made a steal and got the ball to Toney, who was fouled on a driving attempt.

"JD had a huge steal," Musselman said. "He just as this knack for getting clutch steals."

Along with Toney's points and rebounds, he defended Davenport -- who scored 19 points against Illinois -- and held him scoreless.

"I don't care how we shoot as long as we win," Musselman said when asked about the Razorbacks having struggling to make baskets against Kansas State and Cincinnati. "Whatever our record is, it's pretty good and we're ranked, so somebody shot the ball worse than we have at some point at Arkansas."

Notae was 8 of 34 from the field in the two games.

"All of us have the cold. I'm sick. It's going around our team -- the common cold. I do think we have some guys dragging, including some of the coaches."

Saunders started the run with a layup and DeJulius ended it with a three-pointer.

Notae hit a three-pointer, then made three free throws after being fouled by Mason Madsen.

The Razorbacks were 0 of 10 before Notae connected from beyond the arc.

Cincinnati led 30-26 at halftime after both teams struggled offensively.

Mike Saunders hit two free throws with 33.2 seconds left in the half to put Cincinnati ahead 30-26.

The Razorbacks got the final shot of the half, but Williams' three-point attempt bounced off the rim.

Notae hit a layup with a Williams' assist for the game's first basket, but he then missed his next eight shots to finish the half 1 of 9.

The Razorbacks went ahead 8-2 on Toney's layup on a fast break after Notae's steal.

Cincinnati pulled within 10-9 on a three-pointer by DeJulius.

Abdul Ado -- a transfer from Mississippi State -- scored on a layup to give the Bearcats' their first lead at 14-13.

Cincinnati went ahead 18-16 on Saunders' layup.

Arkansas regained the lead, 22-21, on a Davonte Davis fast break basket with a steal and assist by Williams a layup by Connor Vanover with a Toney assist after a blocked shot by Notae.

Arkansas improved to 2-3 all-time against Cincinnati

Razorbacks Coach Eric Musselman is 2-0 against the Bearcats, including Nevada's 75-73 victory over Cincinnati in the 2018 NCAA Tournament when he coached the Wolf Pack.

Print Headline: Tough it out