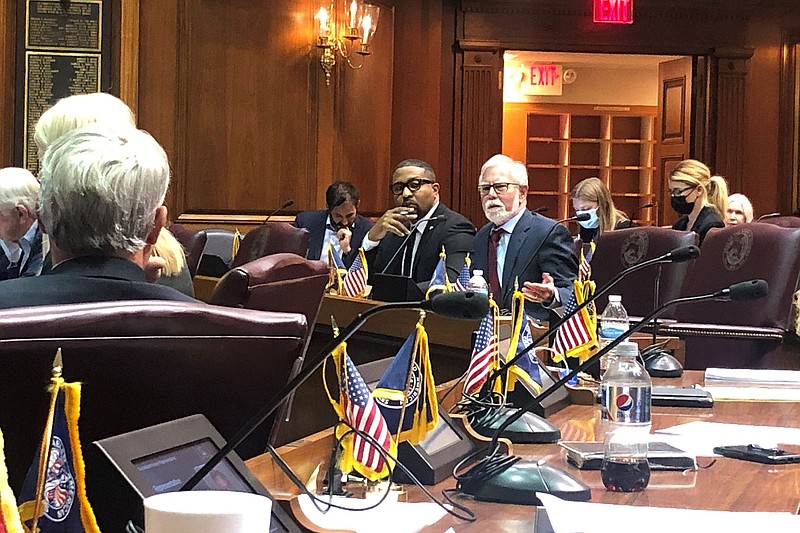 The Biden administration has asked a federal appeals court to let the government proceed with a federal mandate that all large employers require their workers to get vaccinated against the coronavirus or submit to weekly testing and mandatory masking starting in January.

In a 52-page motion filed Tuesday, the Justice Department urged the 6th U.S. Circuit Court of Appeals in Cincinnati to lift a judicial stay on proceeding with the rule "as soon as possible" while it is being challenged in court, saying the requirement would "save thousands of lives and prevent hundreds of thousands of hospitalizations."

[Video not showing up above? Click here to watch » arkansasonline.com/1124mta/]

The Justice Department said the federal government should be permitted to address "the grave danger of Covid-19 in the workplace."

About 47 million adults in the U.S. remain unvaccinated, according to the Centers for Disease Control and Prevention.

The conservative-leaning 6th Circuit could respond at any time. Regardless of its ruling, the case is likely to be decided by the U.S. Supreme Court.

The Occupational Safety and Health Administration invoked a rarely used emergency power to issue the policy this month at the direction of President Joe Biden as one of several vaccine mandates he announced in September. The OSHA rule applies to employers with at least 100 workers, although it exempts those who work at home or exclusively outdoors.

The administration estimates the rules will save more than 6,500 lives and prevent more than 250,000 hospitalizations over a six-month period, and the requirements are more flexible than many similar policies put in place by private companies and state and local governments.

Nevertheless, the policy was immediately challenged by employers around the country and several Republican-controlled states. In court papers, they argued that the rule exceeded the agency's authority under law to issue regulations to protect workers from toxic hazards at work -- arguing that the law was meant to address dangerous substances such as asbestos, not exposure to the coronavirus.

Earlier this month, a three-judge panel on the 5th U.S. Circuit Court of Appeals in New Orleans agreed with the plaintiffs in several of those cases and temporarily blocked the government from proceeding with the rule. Those judges found that the Labor Department exceeded its authority and caused "economic uncertainty" and "upheaval" for businesses that "threatens to decimate their workforces."

But since then, those cases and many others from around the country have been reassigned to the 6th Circuit to consolidate the litigation.

"The 5th Circuit's stay should be lifted immediately," the Justice Department said in its filing. "That court's principal rationale was that OSHA allegedly lacked statutory authority to address the grave danger of COVID-19 in the workplace on the ground that COVID-19 is caused by a virus and also exists outside the workplace. That rationale has no basis in the statutory text."

If the 6th Circuit is not inclined to reinstate the policy, the government said it should still narrow the ruling from the 5th Circuit to require the masking-and-testing policy to remain in effect while the litigation continues.

Such steps are necessary, the government said, because of the "extraordinary and ongoing threat to employee safety in the workplace, and the proven ability of masking and testing to mitigate that threat."

A group of mostly Republican attorneys general has asked the 6th Circuit to expedite review of the case by initially considering it with a full complement of judges instead of the typical three-judge panel.

The states told the court that the case is one of "exceptional importance" that will "affect the personal health decisions of tens of millions of Americans, coast to coast."

"It will determine whether private companies -- many of which are still struggling to survive the economic carnage inflicted by COVID-19 -- must invest resources helping the federal government run a mass-vaccination program," according to the filing from 27 states, led by Ohio Attorney General Dave Yost.

The Justice Department did not take a position on the request for initial review by a full, en banc court.

In its ruling against the administration, the 5th Circuit repeatedly referred to the policy as a "mandate."

"Rather than a delicately handled scalpel, the Mandate is a one-size fits-all sledgehammer that makes hardly any attempt to account for differences in workplaces (and workers) that have more than a little bearing on workers' varying degrees of susceptibility to the supposedly 'grave danger' the Mandate purports to address," according to the opinion from a panel of three judges nominated by Republican presidents.

The Biden administration took issue with that characterization Tuesday, noting that employers are free to allow employees to choose not to be vaccinated and instead comply with the testing-and-masking requirements.

The potential cost of compliance for businesses, the government said, does not outweigh the government's interest in protecting employers and workers by preventing deaths and hospitalizations.

A senior administration official said the requirement, which the White House previewed in October, brings the rules for essential travelers in line with those that took effect for leisure travelers earlier this month when the U.S. reopened its borders to fully vaccinated individuals.

Essential travelers entering by ferry will also be required to be fully vaccinated by the same date, the official said.

The rules pertain to non-U.S. nationals. American citizens and permanent residents may still enter the U.S. regardless of their vaccination status, but face additional testing hurdles because officials believe they more easily contract and spread the virus and in order to encourage them to get a shot.

The administration pushed back the requirement for essential travelers by more than two months from when it took effect Nov. 8 for nonessential visitors to prevent disruptions, particularly among truck drivers, who are vital to North American trade. While most cross-border traffic was shut down in the earliest days of the pandemic, essential travelers have been able to transit unimpeded.

Even with the delay, though, Norita Taylor, spokeswoman for the trucking group Owner-Operator Independent Drivers Association, criticized the vaccination requirement, calling it an example of "how unnecessary government mandates can force experienced owner-operators and independent truckers out of business."

"These requirements are another example of how impractical regulations will send safe drivers off the road," she said.

The latest deadline is beyond the point by which the administration hopes to have large businesses require their employees to be vaccinated under the regulation issued by OSHA. As the rule is litigated, the White House has encouraged businesses to implement their own mandates.

Information for this article was contributed by Charlie Savage of The New York Times; by Ann E. Marimow of The Washington Post; and by Zeke Miller and David Koenig of The Associated Press.