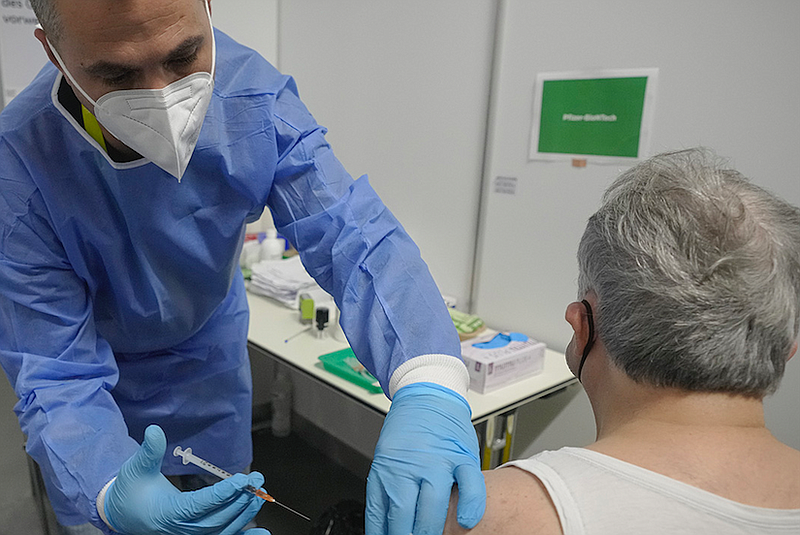 The U.S. is facing a second Thanksgiving of the pandemic in better shape than the first time around thanks to the vaccines, though some regions are seeing surges of covid-19 cases that could get worse as families travel the country for gatherings that were impossible a year ago.

Nearly 200 million Americans are fully vaccinated. That leaves tens of millions who have yet to get a shot, some of them out of defiance. Hospitals in the cold Upper Midwest, especially Michigan and Minnesota, are filled with patients who are mostly unvaccinated.

[Video not showing up above? Click here to watch » arkansasonline.com/1124travel/]

Michigan hospitals reported about 3,800 coronavirus patients at the start of the week, with 20% in intensive-care units, numbers that approach the bleakest days of the pandemic's 2020 start. The state had a seven-day new-case rate of 572 per 100,000 people Tuesday, the highest in the nation, followed by New Hampshire at 522.

In the West, New Mexico, Arizona, Colorado, Utah and Montana also ranked high. Some Colorado communities, including Denver, are turning to indoor mask orders to reduce risk, a policy that has also been adopted in the Buffalo, N.Y., area and Santa Cruz County, Calif.

The statistics in Michigan are "horrible," said Dr. Matthew Trunsky, a respiratory specialist at Beaumont Health in suburban Detroit.

During a recent office visit, he encouraged a patient who uses oxygen to get vaccinated. The patient declined and now is in the hospital with covid-19, desperately relying on even more oxygen, Trunsky said.

He said he continues to encounter patients and their family members espousing conspiracy theories about the vaccine.

"We've had several people in their 40s die in the last month -- 100% unvaccinated," Trunsky said. "It's just so incredibly sad to see a woman die with teenagers. Especially with that age group, it's nearly 100% preventable."

In Detroit, where less than 40% of eligible residents are fully vaccinated, Mayor Mike Duggan said hospitalizations have doubled since early November.

"We have far too many people in this country that we have lost because they believed some nonsense on the internet and decided not to get the vaccine," said Duggan, a former hospital executive.

Despite hot spots, the outlook in the U.S. overall is significantly better than it was at Thanksgiving 2020.

Airports have been jammed. More than 2.2 million people passed through security checkpoints Friday, the busiest day since the pandemic shut down travel early in 2020. On some recent days, the number was twice as high as Thanksgiving a year ago.

Sarene Brown and her three children, all vaccinated, were flying to Atlanta from Newark, N.J., to see family. People close to them have died from covid-19.

"I'm thankful that I'm here, and I'm not in heaven, and I'm thankful for my family and that God helped me survive," said Neive Brown, 7, who has gotten her first dose.

More than 500,000 Americans have died of covid-19 since last Thanksgiving, for an overall death toll of almost 774,000, according to Johns Hopkins University.

"We would encourage people who gather to do so safely after they've been fully vaccinated, as we've been saying for months now," said Dr. Rochelle Walensky, director of the Centers for Disease Control and Prevention. "I do think that this is very different, because we actually have the tools to prevent the vast majority of cases."

Dr. Eric Topol, head of the Scripps Research Translational Institute, said his optimism is tempered by the delta variant's ability to jump from person to person, especially among the millions who are unvaccinated or are due for a booster.

Denver's public hospital, Denver Health, is sending people elsewhere because of a lack of beds. Staff members were exhausted from treating covid-19 patients and others who had postponed other medical needs, chief executive Robin Wittenstein said.

"Our system is on the brink of collapse," she said.

Coronavirus cases in children in the United States have risen 32% from about two weeks ago, a spike that comes as the country rushes to inoculate children before the winter holiday season, pediatricians said.

More than 140,000 children tested positive for the coronavirus from Nov. 11-18, up from 107,000 in the week ending Nov. 4, according to a statement Monday from the American Academy of Pediatrics and the Children's Hospital Association.

These cases accounted for about a quarter of the country's caseload for the week, the statement said. Children younger than 18 make up about 22% of the U.S. population.

"Is there cause for concern? Absolutely," Dr. Sean O'Leary, vice chair of the academy's infectious diseases committee, said in an interview Monday night. "What's driving the increase in kids is there is an increase in cases overall."

Children have accounted for a greater percentage of overall cases since the vaccines became widely available to adults, said O'Leary, who is also a professor of pediatrics at the University of Colorado School of Medicine and Children's Hospital Colorado.

Although children are less likely than adults to develop severe illness from covid, they are still at risk and can also spread the virus to adults. Experts have warned that children should be vaccinated to protect against possible long-covid symptoms, multisystem inflammatory syndrome and hospitalization.

At the end of October, about 8,300 American children 5 to 11 have been hospitalized with covid and at least 172 have died, according to the CDC.

At a news conference Friday, Dr. Janet Woodcock, acting commissioner of the Food and Drug Administration, said hospitalizations and deaths among 5- to 11-year-olds were "really startling."

O'Leary said it did not help that many schools had softened their safety protocols in the past few months.

"So any protection that might be happening in schools is not there," he said.

Vaccinations of younger children are likely to help keep schools open, experts say. Virus outbreaks forced about 2,300 schools to close between early August and October, affecting more than 1.2 million students, according to data presented at a CDC meeting Nov. 2.

O'Leary said he was especially concerned about case increases in children during the holiday season.

With the pace of inoculations stagnating among U.S. adults, states are rushing to encourage vaccinations for children 5-11, who became eligible this month after the CDC authorized the Pfizer-BioNTech vaccine for that age group. In May, the federal government recommended making that vaccine available to children 12-15. Teenagers 16 and older became eligible in most states a month earlier.

All the data so far indicates that the vaccines are far safer than a bout of covid, even for children.

This was supposed to be the year vaccines brought the pandemic under control. Instead, more people in the United States have died from covid-19 this year than died last year, before vaccines were available.

The final number for this year will be higher, not only because there is more than a month left but because it takes time for local agencies to report deaths to the CDC.

Covid-19 has also accounted for a higher percentage of U.S. deaths this year than it did last year: about 13% compared with 11%.

Experts say the higher death toll is a result of a confluence of factors -- most crucially, lower-than-hoped-for vaccination rates, but also the relaxation of everyday precautions such as masks and social distancing, along with the rise of the highly contagious delta variant.

Essentially, public health experts said, many Americans are behaving as if covid-19 is now a manageable, endemic disease rather than a crisis -- a transition that will happen eventually but has not happened yet.

Yet many are also refusing to get vaccinated in the numbers required to make that transition to what scientists call "endemicity," which would mean the virus would still circulate at a lower level with periodic increases and decreases but not spike in the devastating cycles that have characterized the pandemic.

Just 59% of Americans are fully vaccinated, the lowest rate of any Group of 7 major industrialized nation.

"We have the very unfortunate situation of not a high level of vaccine coverage and basically, in most places, a return to normal behaviors that put people at greater risk of coming in contact with the virus," said Jennifer Nuzzo, a public health researcher and senior scholar at Johns Hopkins Center for Health Security.

Dr. Celine Gounder, an infectious disease specialist at Bellevue Hospital Center, estimated that roughly 15% of the U.S. population might have immunity from previous infection, which is not as strong or durable as immunity from vaccines.

Many of those people have also been vaccinated, but even assuming the two groups didn't overlap and so 74% of Americans had some level of immunity, that still would not be enough to end the pandemic, said Gounder. It would probably take an 85% to 90% vaccination rate to make the coronavirus endemic, she said.

"When vaccines rolled out, people in their minds said, 'Covid is over,'" Gounder said. "And so even if not enough people are vaccinated, their behavior returned -- at least for some people -- to more normal, and with that changing behavior you have an increase in transmission."

Some news outlets reported last week that confirmed 2021 deaths had surpassed 2020 deaths. Those reports stemmed from counts of deaths based on when the deaths were reported, not when they happened -- meaning some deaths from late 2020 were counted in early 2021. The CDC counts, which did not show that mark being reached until this week, are more accurate because they are based on the dates on death certificates.

Information for this article was contributed by Ed White, Colleen Slevin, Corey Williams, Ted Shaffrey and Carla K. Johnson of The Associated Press; and by Alyssa Lukpat and Maggie Astor of The New York Times.