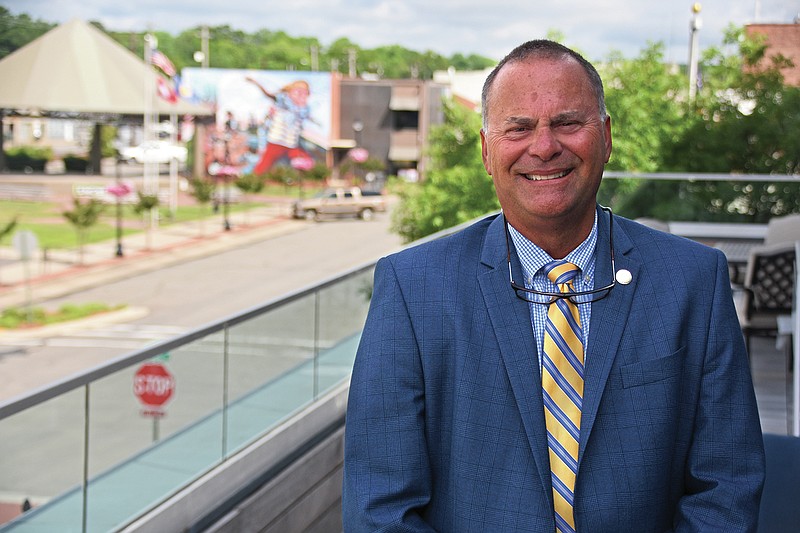 Conway Mayor Bart Castleberry poses for a photo Wednesday, May 26, 2021 at his office in downtown Conway. (Arkansas Democrat-Gazette/Staci Vandagriff)

A special election will be held Feb. 8 to ask Conway voters to approve three bond issues totaling $39.7 million for construction of a new aquatic center and separate soccer complex.

“I want to let everyone know that this is not an increase in taxes. It’s just the extension of a bond issue,” Conway Mayor Bart Castleberry said in a Tuesday hearing before the regular City Council meeting. “It will provide something that we have needed for a long, long time in Conway. It’s a place for kids to swim.” The City Council voted unanimously to set the special election and ask voters to pass three bond revenue issues to fund the projects.

The second is for $27.3 million to finance the construction and operation of the proposed community and aquatic center.

The third is for $5.5 million to build the new soccer complex.

Each bond issue will be listed separately on the ballot. It is possible that one bond issue could be approved while the others fail.

The city hosted workshops earlier this fall to gather public input on what citizens wanted to see in the new community and aquatic center and soccer complex.

A committee, headed by Ward 4, Position 2, Councilwoman Shelia Isby, spent the past year touring other community centers around the state including Pine Bluff, Clarksville, Rogers and Bentonville, returning with several design and amenity options.

The final plans include a comprehensive two-level indoor and outdoor aquatic center and a full gymnasium that will be located at the site of the old city airport in the Central Landing area.

Erik Kocher, of Hastings+-Chivetta Architects out of St. Louis, presented the plans to the council and answered questions.

The aquatic center will feature an eight-lane, 25-yard competition pool with a two-lane temperature-controlled cooling and warming pool.

“There will be very large decks all around this pool,” Kocher said. About 200-300 swimmers at a time can be accommodated on the decks while the spectator seats can hold up to 250.

The aquatic center will be open 12 months a year, Kocher said.

The interior will include a current channel pool and underwater bubble benches. Two party rooms will be available directly off the deck.

The party rooms are expected to be a big revenue generator with birthday parties cycling throughout opening hours, Kocher said.

The outdoor pool area will include three party rooms as well. There will be three different slides with two dropping into a plunge pool. A run-out pool with about 4 inches of water for toddlers and young children will also be installed.

Also included is a dog-bone shaped lazy river with an attached bubble bench.

A zero entry beach — meaning the water can be entered by walking down a slope — with a maximum depth of 18 inches of water will include slides and play features for children ranging from toddlers up to 5 years old.

A climbing wall on the edge of the pool will allow climbers to splash back into the water after making it to the top.

There will be a whole series of lounge areas and shade structures as well as a grassy section and picnic tables.

The concession space will include a grill for hot dogs and hamburgers as well as a pizza oven.

The whole area will be fenced in and landscaped with trees.

Included in the indoor space is a large gymnasium equipped and designed for multiple sports, including pickle ball. A walking track circles the perimeter of the gym.

Castleberry said the new soccer complex will be by Curtis Walker Park on land provided by the Conway Human Development Center.

“Both of these are going to be an economic accomplishment for the city of Conway,” Castleberry said.

City spokesman Bobby Kelly said after the meeting that as of yet there is no beginning or completion timing for the projects.

Ward 1, Position 2, Councilman David Grimes said the facility is geared to be affordable for all.

“We’re doing this for everyone to enjoy,” Grimes said. “The recreational aspect will be very affordable. If it wasn’t, we’d be defeating the purpose.” Ward 4, Position 1, Councilman Theodore Jones Jr. said he was “so glad” that Conway was getting a swimming pool.

“I’ve been here all my life,” Jones said. “This would really be a plus, not just for adults, but for the kids to have something to do.” Ward 1, Position 1, Councilman Andy Hawkins joked that he would be glad to give Jones swimming lessons once the aquatic center was open.

“Mr. Hawkins, I hate to tell you this, but I used to be a lifeguard,” Jones said.

Isby made a public declaration at the end of the discussion.

“I will learn how to swim if this passes, in this pool,” she said.