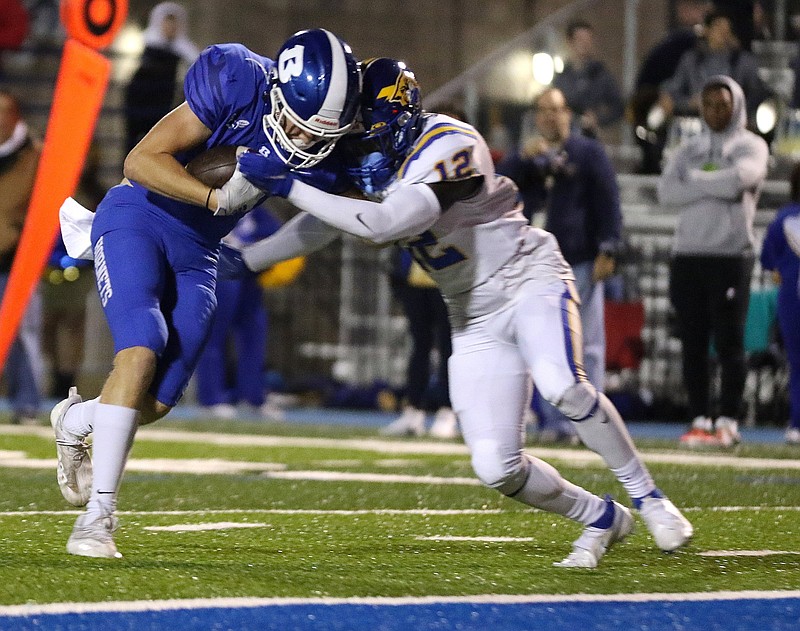 Bryant wide receiver Blake Everett (left) fights his way into the end zone for a touchdown while being hit by North Little Rock defensive back Joshua Thrower during the teams’ Oct. 29 game in Bryant. The Hornets have won the past six meetings against the Charging Wildcats, and they will meet their 7A-Central Conference rivals once again Friday night in the Class 7A semifinals. (Arkansas Democrat-Gazette/Thomas Metthe)

In the six years Buck James has lead the Bryant football program, there's no team his Hornets have faced more than North Little Rock.

Since 2016, the Hornets and Charging Wildcats have squared off 10 times, with Bryant winning the past six games and leading the series in that time 6-4.

Friday will be the 11th time they have met since James took over the Hornets, as No. 3 seed North Little Rock travels to No. 1 seed Bryant in the Class 7A semifinals.

While the teams are 7A-Central Conference foes, four of the games have been in the playoffs, including this week's game. All of the playoff contests have either been in the semifinal round or for a state tile. From 2018 to 2020, they met in back-to-back-to-back 7A title games.

Since beating the Charging Wildcats 27-7 in the 2018 state title game, the Hornets haven't lost to them, allowing an average of 12.3 points per game.

"When Buck got there, what he wanted to establish is what he had at his other stops," North Little Rock Coach Randy Sandefur said. "Being very physical, winning at the line of scrimmage, not making a bunch of mistakes.

"And that's what Buck's done. Buck's come in there and instilled that toughness. That's why we enjoy playing Bryant, because we know what we're going get, and we're going to be on the same page with them."

Still, James said he remembers the early contests in which Bryant was hard-pressed for wins.

"There was apples and oranges difference in us and them," James said. "They were much bigger, faster and stronger and, well, much better coached than what we were."

North Little Rock was 4-0 in its first four games against Bryant and James, with one coming in the playoffs.

Under then-coach Jamie Mitchell, The Charging Wildcats won those games by an average of 20.3 points, with 38-7 and 46-13 drubbings in the first two contests.

Although the Charging Wildcats have lacked recent success against Bryant, it's clear James and the Hornets still think highly of their opponent. James pointed to North Little Rock's success the past three seasons -- a combined 29-9 record with back-to-back state title appearances -- despite having three different head coaches in that span.

North Little Rock promoted Sandefur from defensive line coach to head coach in May, and he was "the right man for the job," James said. The North Little Rock coach is in his 39th year with the program.

"As the head football coach at any place like Bryant or North Little Rock, you go to bed thinking about it, and you wake up thinking about it," Sandefur said with a chuckle. "You've got a lot of responsibilities and, like I said, our coaches have done a great job of taking some of that burden off me."

Friday's game will also mark the fifth time in six seasons the teams have squared off twice in a season. This year's first game, on Oct. 29, saw Bryant walk away with a 24-12 win at Hornet Stadium.

James said this year's North Little Rock squad touts one of the best defenses it's had since he began coaching against it, with a notable defensive line. Sandefur pointed out the Hornets' ability to extend plays and drives, whether it's on the ground or through the air. Both preached playing physically and mistake-free.

"It's become one of those rivalries in Arkansas that historians can sit there and talk about, 'Back in the days when Bryant and North Little Rock played,' " James said. "It's refreshing for both communities. I think it's refreshing for both sets of teams. And I think it's something that, 25 years from now, I think they can pull out and say, 'Those teams met 11 times in six years, and it was a heck of a ballgame every single time they played.' "

However, the Bulldogs were down a key element, quarterback Hunter Houston, was out for the game following a minor knee surgery. When the teams meet in Greenwood on Friday for a semifinal matchup, Houston will be in command of the Bulldogs' offense.

"A huge impact," Greenwood Coach Chris Young said in reference to Houston. "It's big having Hunter back, just the experience. and Hunter can really throw the football. [He] gives us a chance to get the ball to the guys on the perimeter that we think are really good football players for us."

Houston injured his knee in Week 2 of the season during a 54-48 win against Fort Smith Southside. He then re-injured it the next week in a 29-20 loss to Fort Smith Northside, rendering him out for the Parkview game the following week.

The Bulldogs started sophomore Slade Dean against the Patriots, though he played the majority of that game with a broken thumb. Dean's injury led them to starting another sophomore, third-string Cole Kindle, before Houston's return against Siloam Springs.

Houston is 195-of-284 passing for 2,624 yards and 22 touchdowns this season. The Bulldogs are 5-1 since his return with a one-point loss to Benton the only blemish.

Even with his quarterback back, Young said he is aware this week's matchup won't be much easier with Houston in tow.

"I think they've played really well in the last couple of weeks," Young said in reference to Parkview. They're kind of rolling right now. They're well coached, they obviously have a ton of talent, and when you combine those two things, you get a great high school football team."

Through three weeks of the state playoffs, one of the lowest-seeded teams still standing in any class is the team from Amity.

Centerpoint, a No. 4 seed in Class 3A, has managed to pull off upsets against No. 3 seed Osceola, and a top-seeded, undefeated Charleston squad to reach the third round of the Class 3A playoffs.

Along with Marion and Parkview in Class 6A, Centerpoint is one of three teams still in the playoffs that is lower than a No. 3 seed.

Centerpoint Coach Cary Rogers said his team has had an "up-and-down" season, with the Knights' three losses coming at a time when they were depleted defensively, with at least one starter injured at every level of the defense. The losses came against Prescott, Jessieville and Glen Rose, which each entered the playoffs as top-three seeds.

Rogers said there's been several standout individuals for the Knights, including quarterback Josh Lawson and Jace Clark. He also said Kaden Owens and CJ Fox, who each play receiver and defensive back, have been phenomenal on both sides of the ball.

Of the 19 games being played this weekend, 10 are regular-season rematches. Four (North Little Rock at Bryant; Little Rock Parkview at Greenwood; Marion at El Dorado; Little Rock Christian at White Hall) are conference rematches, but the other six (Conway at Fayetteville; Stuttgart at Warren; Newport at Prescott; Des Arc at McCrory; East Poinsett County at Clarendon; Strong-Huttig at Mountain Pine) occurred in nonconference play. In nine of the games, the higher seed won the first game, with Parkview's 48-28 win against Greenwood being the lone exception. ... Prescott's Jaylen Hopson has the largest rushing yardage total (1,880) of rushers who remain in the playoffs. ... Three of the state's top-five passers statistically -- Pulaski Academy's Charlie Fiser, El Dorado's Sharmon Rester and Fayetteville's Bladen Fike -- are still in the playoffs. Fiser still leads the state in passing yards, while Rester and Fike are No. 3 and 4, respectively. ... Fayetteville's Isaiah Sategna and Pulaski Academy's Jaylin McKinney are the only top-10 receivers in the state who still remain in the playoffs. Sategna leads the state with 1,614 receiving yards and McKinney is sixth in the state with 1,221 yards.