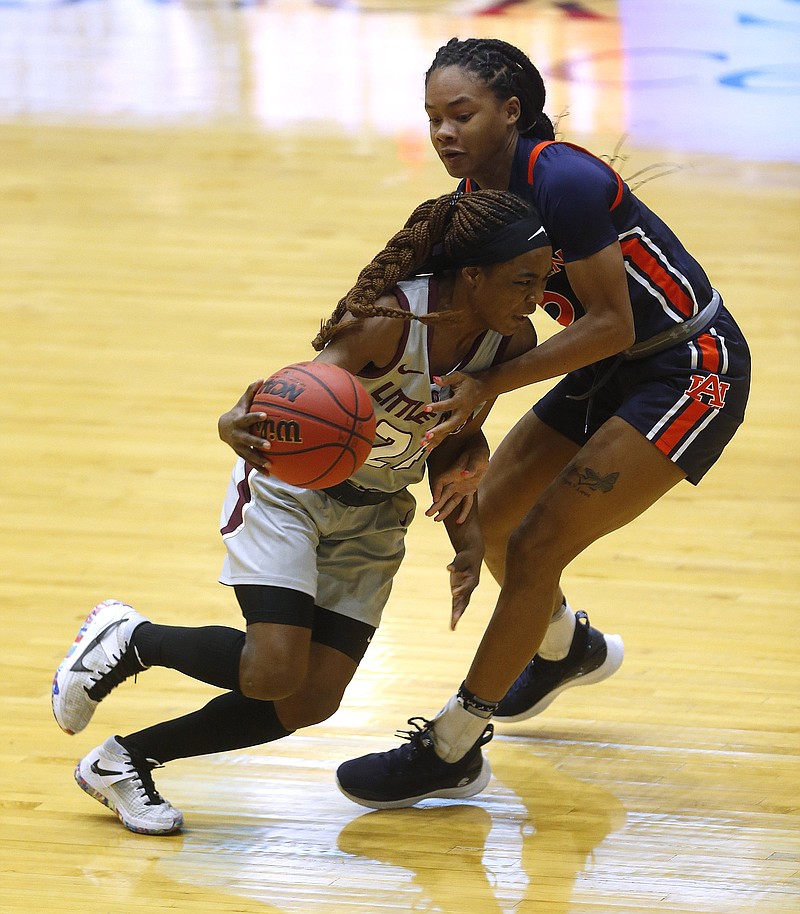 UALR’s Mayra Caicedo (left) drives toward the basket while being guarded by Auburn’s Mar’shaun Bostic during the Trojans’ victory over the Tigers on Wednesday at the Jack Stephens Center in Little Rock. (Arkansas Democrat-Gazette/Thomas Metthe)

Senior point guard Mayra Caicedo is not perfect, but one thing was evident to University of Arkansas at Little Rock Coach Joe Foley on Wednesday afternoon.

"It's hard to play without Mayra," Foley said. "She takes control of it."

Caicedo, a 5-3 blur of play-making on offense and disruption on defense, played a pivotal role in the Trojans' 57-49 victory over Auburn at the Jack Stephens Center.

Caicedo finished with 13 points, 3 rebounds 8 assists and 3 steals to lead UALR (4-1) to its second win over an SEC team in two tries this season.

Caicedo, from Buga, Colombia, also contributed to an increased level of angst Foley felt late in the third quarter and early in the fourth when she had to sit after picking up her third and fourth fouls.

"In that game, I really didn't want my point guard sitting over there with me," Foley said.

Caicedo's presence was vital from the outset in a game in which UALR led for more than 39 of 40 minutes.

She took charge in the third quarter, spearheading a 16-4 surge that lifted UALR to a 43-30 lead.

It started with a Caicedo three-point basket to put her team up 30-26, then continued with a Caicedo rebound and assist to Krystan Vornes (14 points, 10 rebounds), and a defensive rebound and a turnaround jumper by Caicedo to force an Auburn timeout call with 6:28 to play in the third quarter and UALR up 34-26.

Caicedo continued to create after the timeout, feeding leading scorer Sali Kourouma (16 points, 3 rebounds) twice, the final time on a three-pointer with 1:52 to play in the third to give UALR its largest lead at 43-30.

"I was trying to get Sali the shots, because I knew she was about to go off," Caicedo said. "I feel like she started using the screens, and we were listening more to Coach."

Kourouma was limited to under 29 minutes because of foul trouble, including a four-minute span in the fourth quarter when both players were seated on the bench.

Caicedo returned first, with her team up 44-39 at the 6:31 mark, and Kouroma re-entered three minutes later with the Trojans up 50-47.

Kourouma's basket off a Caicedo assist made it 52-47 with 1:19 to play, and two free throws by Caicedo kept the Trojans up 54-49 in the final minute.

Kourouma fouled out with 42 seconds to play, but the Trojans made 5 of 6 throws to hold the lead.

"Foul trouble got us," Foley said. "We were having to shift around a lot to get the right people in the right spots."

Foley said defense carried the day for the Trojans, but he also praised Caicedo and Kourouma for taking control in the third-quarter run.

"That's their job," Foley said. "It's good to see that you've got kids that make those type of plays."

Auburn Coach Johnnie Harris said her Tigers didn't do enough to get over the top against the Trojans or slow down Caicedo.

"She's fast," Harris said. "It was hard to keep her in front. She's a tough little kid."

Sania Wells led Auburn (2-3) with 11 points, but the Tigers could not overcome 19-of-59 shooting from the field and the trio of Caicedo, Kourouma and Vornes.

The Trojans return to play Friday in the Thanksgiving Tournament at Oral Roberts University against Abilene Christian, and Foley was asked if he might enjoy his turkey a little more with a 2-0 record vs. SEC teams Vanderbilt and Auburn on the Trojans' resume.

"When you're winning like that, in tight situations, you can't ask for anything better than that," Foley said. 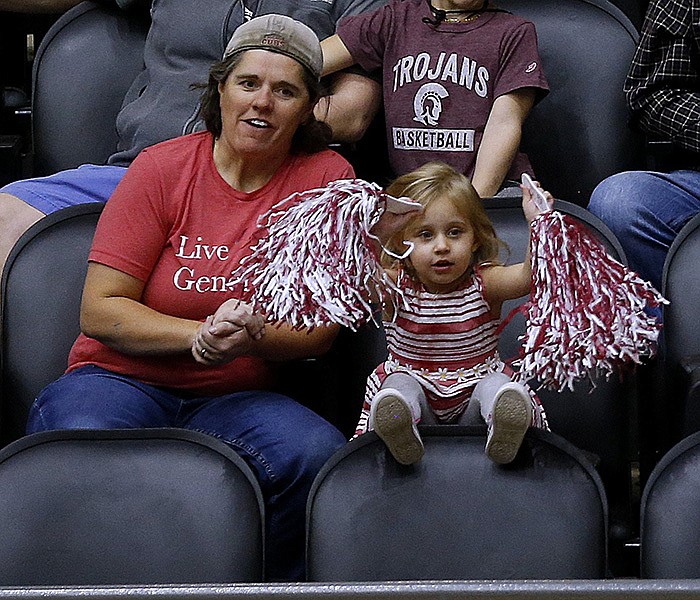 Bella Thomas, 3, waves her pompoms and cheers with her mother, Donna Thomas, while watching the University of Arkansas at Little Rock women’s basketball game against Auburn on Wednesday at the Jack Stephens Center in Little Rock. (Arkansas Democrat-Gazette/Thomas Metthe)