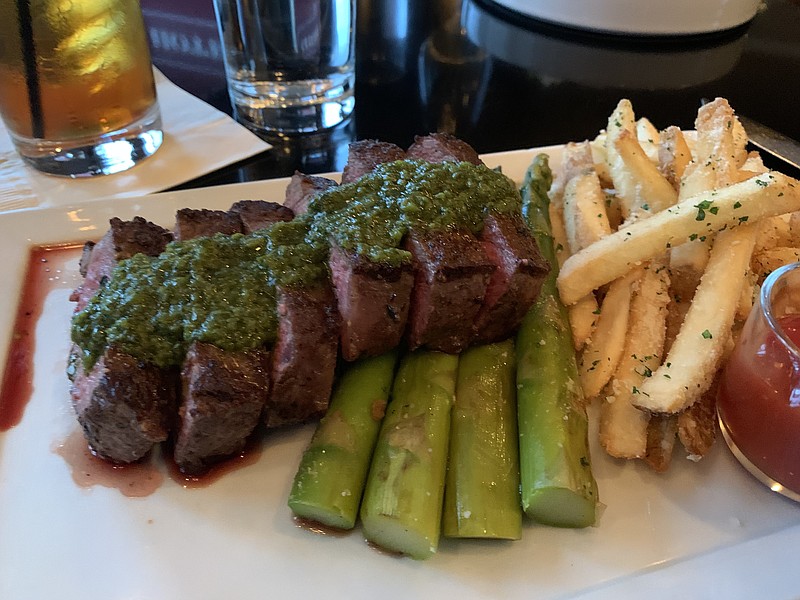 With the reopening of Little Rock's Capital Hotel in May came the reopening of the Capital Bar & Grill, the hotel's mainstay "second" restaurant and one of the town's most popular watering holes.

The hotel's flagship restaurant, One Eleven at the Capital, though open for breakfast, remains closed for lunch and dinner. Executive chef Brad Izzard, who came aboard over the summer, has directed part of his attention to the CB&G menu, which now features a handful of higher-end entrees in addition to the holdovers from former chefs de cuisine — especially the most popular perennials like the upscale 7-ounce Burger and the shareable appetizers (i.e., the pimento cheese dip and the House Parmesan Fries).

One thing is for sure: CB&G's popularity is as great or greater than before the pandemic; it wasn't this crowded the last time we reviewed it, in June 2019, about the time former chef James Hale took it over. The staff is fully masked and sometimes gloved, but if you're still into social distancing, that's just not happening here. We managed to land a dinnertime table but the place was packed out at lunch and seating at the bar was cheek by unmasked jowl.

The physical layout has remained the same over many years, rife, as we observed a couple of years ago, with Old World, old-wood charm, the central bar dominating the "landscape" with rock-firm pillars holding up a "roof" and solid wood tables and chairs semi-surrounding it on three sides.

Plentiful arugula and fluffy-grated Parmigiana-Reggiano cheese tops the Chicken Milanaise at Capital Bar & Grill. (Arkansas Democrat-Gazette/Eric E. Harrison)
All those patrons make it very noisy, and we wouldn't currently recommend it as a cozy place to hold a conversation while you dine. Sitting at the bar for the first time in years, we were impressed by the selection of scotches and cognacs on the shelves on the bar's door side.

The prices are steep — it is, after all, a hotel restaurant, so we certainly expected that — but not as steep as they would have been if we'd been dining in One Eleven, even for the two upper-end entrees we enjoyed.

We puzzled a bit before ordering the Chicken Milanaise ($24), in large part because the spelling was, well, unconventional — for an Italian restaurant, the menu-makers would have spelled it "Milanese" or maybe "Milanesa" (meaning, of course, "from Milan," and involving coating thin slices of meat in eggs and seasoned bread crumbs and then frying them). Perhaps this is a French adaptation.

Anyway, once the dish arrived, we didn't care how it was spelled. We were delighted with the thick and surprisingly very tender, very moist, lightly fried chicken breast, over-generously topped with arugula and fluffy-grated Parmigiana-Reggiano cheese, on a bed of caper vinaigrette. Intrepid Companion's only complaint was that she was not expecting quite so much arugula, which she does not particularly favor. 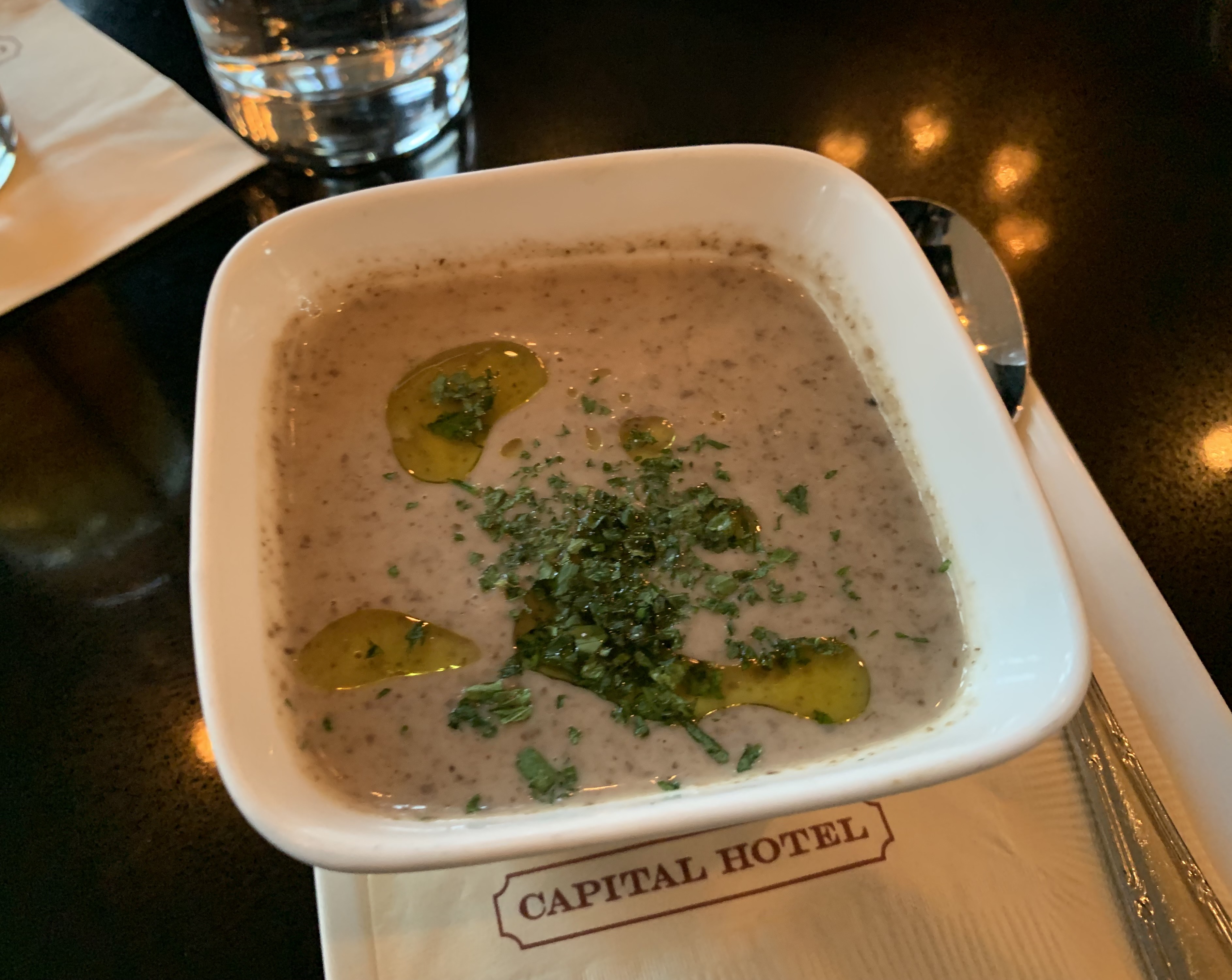 Capital Bar & Grill’s soup of the day cup was a creamy mushroom, with a sheen of what we believe to be truffle oil. (Arkansas Democrat-Gazette/Eric E. Harrison)
We reveled in our Steak Frites ($47), a 12-ounce prime New York Strip pre-sliced into manageable chunks and topped with chimichurri, with a side of the parmesan fries and, because of an apparent broccolini supply-chain shortage, kitchen-substituted asparagus. The steak was tender and prepared medium rare just as we ordered; the fries were delicious and the asparagus was near-perfectly cooked.

We sprung for $8 for the soup of the day cup (a bowl would have been $10), a rich creamy mushroom; we generally prefer bigger mushroom chunks, but this was tasty and with a light sheen that we suspect came from truffle oil — and and who can complain about that?

At lunch, we decided to revisit the Cuban ($16), a slightly gooey but satisfying sandwich with roast pork, sliced ham, Swiss cheese and dijonnaise on what the menu said would be a toasted baguette, though ours came out on flatter panini-pressed bread. For our accompaniment, we chose the side salad (fries are also an option) — a nice selection of field greens, cucumber slices and red and yellow cherry tomatoes in a slightly sweet red-wine vinaigrette.

Service was excellent for dinner and good for lunch — the bartender more or less nimbly balanced serving nearly a dozen lunch patrons with fixing drinks for the folks at the tables.