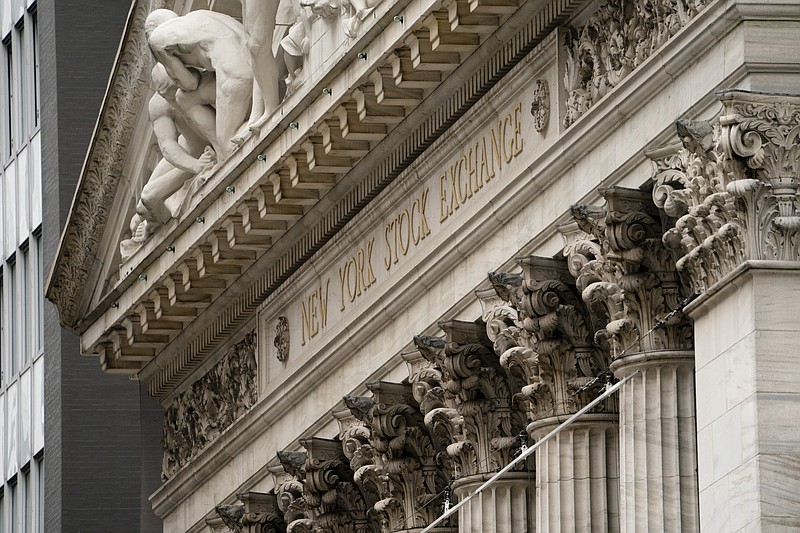 FILE - The New York Stock Exchange operates during normal business hours in the Financial District, Wednesday, Oct. 13, 2021, in New York. Stocks are opening lower on Wall Street, Wednesday, Nov. 24, as the market continues an unsettled period of trading ahead of the Thanksgiving holiday in the U.S. (AP Photo/John Minchillo, File)

Wall Street capped another wobbly day of trading Wednesday with an uneven finish for the major stock indexes ahead of the Thanksgiving holiday in the United States.

The S&P 500 rose 0.2% after wavering between small gains and losses most of the morning. The benchmark index regained its footing in the final hour of trading.

The Dow Jones Industrial Average slipped less than 0.1% after having been down 0.6% in the early going. The Nasdaq rose 0.4%, getting a lift from a late-afternoon rally in technology stocks.

The Federal Reserve released the minutes from its October policy meeting, which showed that Fed officials discussed how they "would not hesitate" to take appropriate actions to address inflation pressures that posed risks to the economy.

The minutes also revealed Fed officials maintained that the spike in inflation seen this year was still likely to be transitory while acknowledging that the rise in prices had been greater than expected. The minutes covered a meeting in which the Fed voted to take the first steps to roll back the support it has provided to an economy recovering from a global pandemic.

Supply chain problems and pressure from inflation have been key concerns for a wide range of industries. Many companies have warned that they are having trouble meeting demand and are dealing with higher costs for raw materials. Those higher costs are being passed off to consumers, who have been paying more for everything from food and other staples to a wide range of retail items.

"You've got an environment where the persistence of supply chain issues is starting to wear on people," said Eric Freedman, chief investment officer at U.S. Bank Wealth Management.

Slightly more stocks in the S&P 500 index fell than rose. Gains in technology, real estate and energy stocks outweighed a slide in banks, materials companies and elsewhere in the market.

Investors kept an eye on the latest batch of quarterly report cards. Computer maker HP rose 10.10% for the biggest gain in the S&P 500 after reporting solid financial results. Autodesk slumped 15.5% after the design software company warned investors the pace of its recovery is being affected by supply chain problems and pressure from inflation.

Bond yields were mixed. The yield on the 10-year Treasury slipped to 1.64% from 1.67% late Tuesday. That weighed down banks, which rely on higher yields to charge more lucrative interest on loans. Shares of JPMorgan Chase fell 0.8%.

The latest update on consumer spending showed an October rebound with a 1.3% rise, according to the Commerce Department. That's slightly more than double the gain in September.

It's been an otherwise uneventful and short week for investors. Markets will be closed today for the Thanksgiving holiday and will close early on Friday.