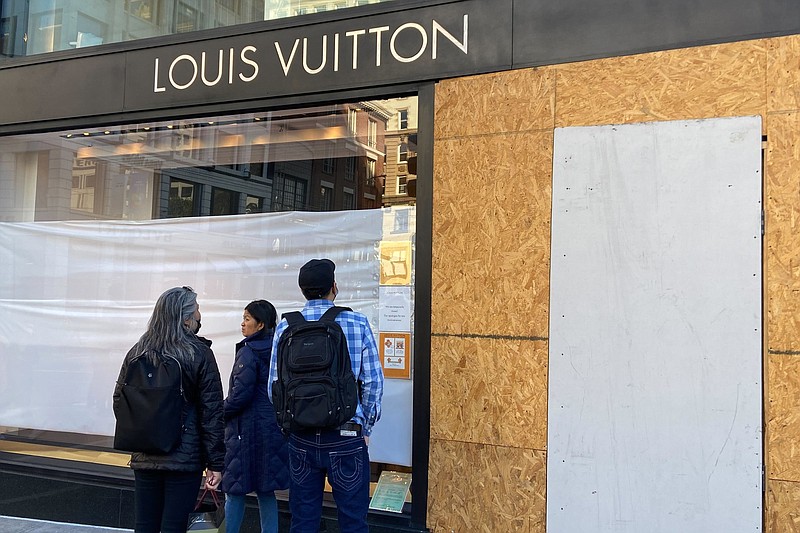 LOS ANGELES -- Bay Area authorities are investigating whether a series of brazen takeover robberies of high-end retail stores might be connected.

The organized robberies have shocked residents and sparked crackdowns by authorities.

San Francisco District Attorney Chesa Boudin said Tuesday that he has charged nine people with felonies in a series of shoplifting incidents that included a mass smash-and-grab at Union Square luxury stores.

At least 40 thieves allegedly broke into a Louis Vuitton store Friday, grabbing whatever they could and loading it into a series of cars parked curbside out front. The shoplifting caravan cut a swath through San Francisco's high-end boutiques, creating chaos while stealing more than $1 million worth of merchandise.

San Francisco Assistant Police Chief Mike Redmond said he expects many more arrests in the Union Square incidents and indicated that the series of mob rip-offs around the Bay Area that began in San Francisco may be connected.

"We believe it is a lot of the same groups involved," he said.

Authorities across the state have stepped up security at retail centers.

Los Angeles police will step up patrols near retail hubs to prevent group takeover robberies after a break-in at Nordstrom in the Grove shopping center.

[Video not showing up above? Click here to watch » arkansasonline.com/1125rob/]

"We must ensure the public has a sense of safety," Police Chief Michel Moore told the Los Angeles Police Commission, the department's civilian oversight body. "We are worried that this kind of conduct will be seen as allowable, and nothing can be further from the truth."

San Francisco Police Chief Bill Scott said in an interview, "We are going to do everything we can to put a stop to this craziness."

He said his officers are going to prevent people from pulling up in front of stores such as Louis Vuitton. "In these spots, people were pulling up right in front and then running in the store, grabbing what they could and jumping back in their vehicles. We are going to disrupt that."

Besides the incidents at the Grove and Union Square:

• On a Saturday night raid of a Nordstrom in nearby Walnut Creek just before closing time, some 80 people jumped out of a pack of cars, flash-mob style, and swarmed the aisles, many escaping with merchandise. Two employees were assaulted, one of them pepper-sprayed.

• Just after midnight Sunday, criminals used a sledgehammer to smash storefront windows at a Louis Vuitton and Saks Fifth Avenue in Beverly Hills, police said, but patrol cars arrived and scared the thieves off before they could get inside.

• Late Sunday, stores were also hit in San Jose and the East Bay.