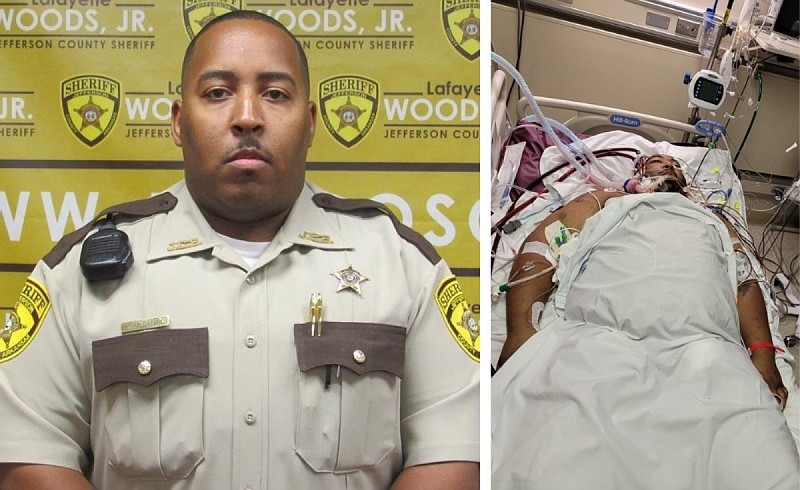 A Jefferson County sheriff's detective is counting his blessings and thanking God for his life this holiday season considering three months ago he was in a medically induced coma because of covid-19 and his parents were trying not to think about a funeral that seemed inevitable.

"I ended up catching covid-19 around the Fourth of July," said McDaniel, who tested positive after going to Urgent Care.

McDaniel said he tried to beat covid at home, but his slight headaches got worse, and then he started to experience shortness of breath.

"At that time, I called for an ambulance to come to pick me up and that's when I was admitted to JRMC," he said.

On July 10, McDaniel was placed in the Jefferson Regional Medical Center Intensive Care Unit with severe covid-19 and pneumonia.

"When I first got to JRMC they had me on straight oxygen," said McDaniel. "Later on I was put on the ventilator for a while."

[Video not showing up above? Click here to watch » arkansasonline.com/1125mcdaniel/]

McDaniel said his health continued to decline. He was put on 100 percent oxygen and then on the ventilator nonstop.

On July 25, McDaniel's poor health forced physicians to intubate him to place him in a medically induced coma. Two days later, he was airlifted to Baptist Health Medical Center in Little Rock.

"We were en route that morning and they told us to prepare for him not breathing and maybe passing away," said McDaniel's father, Thomas McDaniel. "They weren't expecting him to live."

As McDaniel was being airlifted from Pine Bluff to Little Rock, his father and mother, Marionette Crosby, who lived in Fort Worth, Texas, were expecting the worst but praying for the best as they traveled to be with their son.

"I felt really bad. It was something to go through," Thomas McDaniel said. "His mother was in shock and we were just taking it as it came. All we could do is try to get to him."

With the state that their son was in, Thomas McDaniel said funeral arrangements crossed their mind, but they didn't want to dwell on that. Instead they started soliciting prayer.

"We just started praying, hoping God would see him through," said Thomas McDaniel. "That's all we could do."

"On Aug. 8th, Kaylon had a major setback where Sheriff Woods and I escorted his parents to Baptist and where we were met by several officers of the Pine Bluff Police Department," said Brunson in a Nov. 4 Facebook post. "We immediately went into prayer until Kaylon's condition improved."

McDaniel began his law enforcement career with the Pine Bluff Police Department in 2013 before working as a special agent in the Executive Protection/Cyber Crimes unit in the attorney general's office. In 2019, he joined the Jefferson County sheriff's office.

Days turned into sleepless nights and nights turned into troublesome days, but McDaniel's parents never left his side. Most days, Thomas McDaniel said, were spent looking at their son through a glass window.

"Brunson took us back and forth to the hospital in Little Rock because he didn't want me to drive," said Thomas McDaniel, who added that he and Crosby moved to Pine Bluff after their son was placed in a coma.

Family and friends struggled with what was going on, but Thomas McDaniel said they never stopped praying.

"McDaniel's mom--she was one praying woman," said Woods. "She never lost her faith."

People from Pine Bluff and other cities all across the state and those from the AG's office all showed their support as they posted prayers on social media. And their prayers were finally answered.

"I woke up and it was September," said McDaniel, who added that he had to watch the news to confirm the month because he thought it was a joke. "I thought maybe a couple of days had passed. That's what it felt like to me."

Due to the tracheotomy he had to have to help him breathe, McDaniel said he couldn't talk. Describing the experience, he said it "felt like a dream" but seeing all of the IV lines connected to his body and a feeding tube in his nose, he knew it was a reality.

Thomas McDaniel said he and Crosby rushed to the hospital as soon as they received the call that their son had awakened.

"We couldn't go in at the time because he wasn't clear of covid," he said. "We were glad to see him woke but we wanted to see him well also."

"The nurses and the staff at Baptist did a great job with me in trying to push me," said McDaniel, who described the aggressive treatment he had to help him learn how to walk and talk again. "Their goal was to get you up and get you moving again and keep you motivated."

A surprise procession was arranged to welcome McDaniel home that day. More than 50 first responders gathered along I-530 and escorted McDaniel home, while supporters cheered him on as he passed by the Jefferson County Courthouse.

Now McDaniel is taking it one day at a time down the road to recovery. Still using oxygen as needed, McDaniel has been discharged from occupational therapy but still remains in physical therapy.

McDaniel, who admitted he didn't take covid-19 seriously and had not been vaccinated, advised others to "take the necessary precautions so you don't have to go through a near-death experience as I did."

McDaniel received his covid-19 shot the day he was discharged from the hospital. Woods said many others who did not believe in the seriousness of covid-19 had a change of heart once they witnessed McDaniel's condition and went to go get vaccinated.

McDaniel's story ended in a way that so many others that were diagnosed with covid-19 did not. McDaniel, realizing he is a walking miracle, gave all glory to God, stating when the doctors counted him dead, God said "Not yet."

"Two things in my life have proven to be real," said McDaniel. "Covid-19 and the power of prayer."