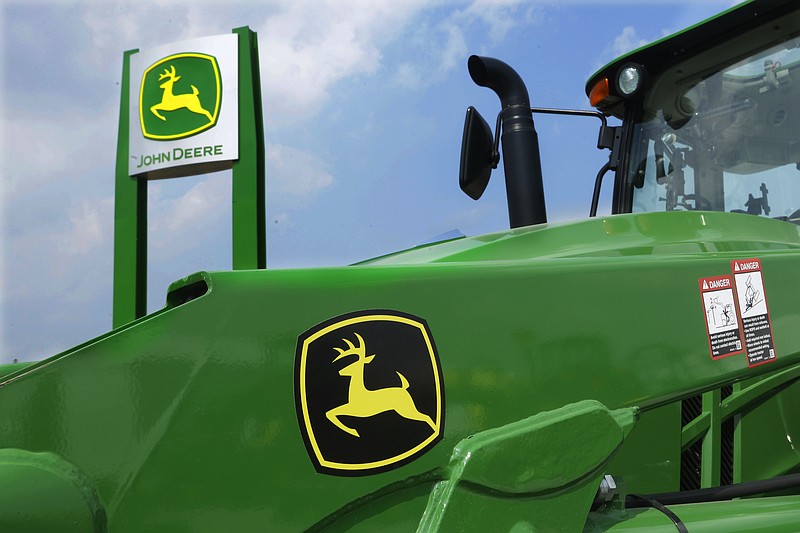 FILE- John Deere equipment is on display at the Farm Progress Show on Aug. 31, 2015 in Decatur, Ill. Deere &amp; Co. said on Wednesday, Nov. 24, 2021, its fiscal fourth-quarter profit jumped 69% on strong sales of its agricultural and construction equipment despite a monthlong strike that began near the end of the period. (AP Photo/Seth Perlman, File)

Deere & Co. said its fiscal fourth-quarter profit jumped 69% on strong sales of its agricultural and construction equipment despite a monthlong strike that began near the end of the period as well as ongoing supply chain problems.

The Moline, Ill.-based company said Wednesday that it earned $1.28 billion, or $4.12 per share, in the quarter that ended Nov. 1. That's up from $757 million, or $2.39 per share, a year ago when the pandemic slowed sales and layoff-related expenses hurt the bottom line.

The results topped Wall Street expectations. The average estimate of nine analysts surveyed by Zacks Investment Research was for earnings of $3.82 per share.

The agricultural equipment manufacturer said its revenue grew 16% to $11.33 billion in the period. Its adjusted revenue was $10.28 billion, which missed Street forecasts. Five analysts surveyed by Zacks expected $10.34 billion.

"Our results reflect strong end-market demand and our ability to continue serving customers while managing supply-chain issues and conducting contract negotiations with our largest union," Deere CEO John May said in a statement.

More than 10,000 Deere workers were on strike at plants in Iowa, Illinois and Kansas from mid-October until last week when the United Auto Workers union accepted the company's third offer that included 10% immediate raises and an $8,500 ratification bonus.

Deere officials estimated that the new contract will increase its pretax costs by about $250 million to $300 million a year, but that won't put a significant dent in its profits.

In fiscal 2021, the company reported record profit of $5.96 billion, or $18.99 per share. Revenue was $39.74 billion. That bottom-line figure topped even Deere's most-optimistic forecast.

Next year, Deere predicts its profits will grow even higher to between $6.5 billion and $7 billion as demand for its iconic green tractors remains high and infrastructure spending helps boost demand for its construction equipment. The company said demand will likely exceed what Deere can produce next year again because of the ongoing supply chain problems.

Deere's upbeat outlook comes despite the work stoppage that slowed Deere's factory output of equipment ranging from tractors and combines to sprayers and more in the U.S. during the busiest farming season of the year. Workers initially rejected two labor contracts that left customers waiting weeks for parts and components that normally take a couple of days to deliver, before finally approving a third deal a week ago.

Strong demand for crops such as corn, soybeans and wheat is driving agriculture prices to the highest in years, bringing in money for farmers who are eager to buy new equipment to keep pace with growing consumer needs.

Deere's stock jumped about 5% to $366.53 in New York trading after the results were announced.

Information for this article was contributed by Joe Deaux of Bloomberg News (WPNS).