Drinkwitz's humor goes to dark side 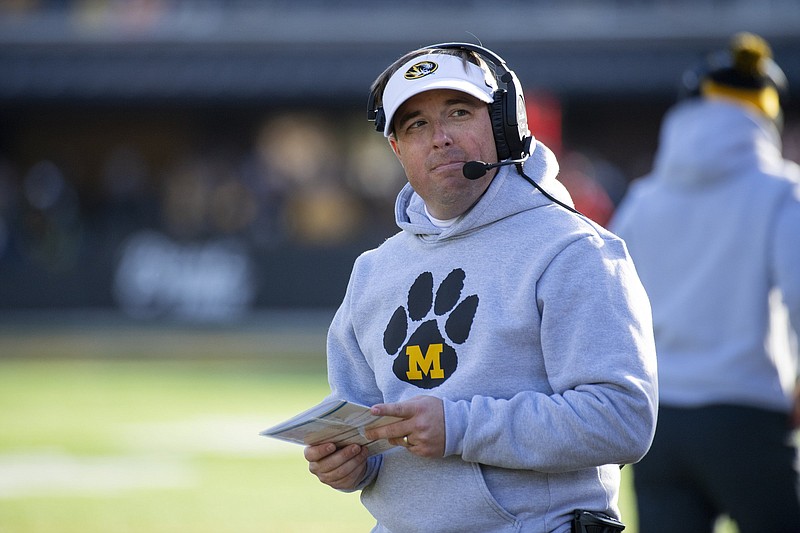 Missouri Coach Eli Drinkwitz had some fun at Dan Mullen's expense after the Tigers beat the Gators 24-23 in overtime on Saturday.

Then Drinkwitz had some more fun on a Tuesday radio appearance with a Florida station after Mullen was fired by Florida.

First we have to go back to last season, when Mullen wore a Darth Vader helmet to his news conference after Florida beat Missouri 41-17.

Drinkwitz responded by ending his news conference after this season's Missouri-Florida game by pulling up the hood on his sweatshirt, grabbing a light saber and saying the classic line from "Stars Wars," "May the force be with you."

During Drinkwitz's Monday news conference leading into Friday's game against Arkansas, he was asked how long he had been planning his "Star Wars" payback for Mullen.

"Really, that's our recruiting department kind of had that whole scenario planned out and after the game in the locker room they asked me about it, and I probably wasn't thinking clearly and said, 'Yeah, let's do it,' " Drinkwitz said. "Then it turned into what it turned into. But, you know, it was funny. I thought it was funny."

If you thought that was funny, Drinkwitz was downright hilarious talking about Mullen during an appearance on radio station 1010XL in Jacksonville, Fla., on Tuesday.

Drinkwitz was asked about Mullen's firing and if he believed in the football gods, because it couldn't have played out any better for Missouri against Florida this season considering what happened in 2020.

"My father-in-law is a farmer, and there is an old saying you reap what you sow," Drinkwitz said. "I believe this, that if you sow kindness, you reap kindness. If you sow jackassibility, you get jackassibility. Just kind of one of those things.

"I've done my fair share of jabbing people and know that it will come back to you. So I think it's just kind of part of the game."

Drinkwitz, told by one of the radio-show hosts that Florida fans approved of his dig at Mullen, said his inspiration was Steve Spurrier, the former Gators coach.

"I think the best jabber in all of sports has been Steve Spurrier," Drinkwitz said. "I felt like that would be something Steve Spurrier would've blessed, so I went with it."

"He doesn't know whether there are six or nine "Star Wars" movies. Darth Vader doesn't win in the end, so I mean, whatever."

Asked Tuesday on the radio show about those comments, Drinkwitz said, "Maybe I do keep records and receipts."

Florida and LSU have waged among the most competitive series in the SEC.

Now the programs might be competing for the same coaches to fill their vacancies.

Auburn quarterback Bo Nix, who is out for the season after undergoing ankle surgery, sounded like a frustrated Arkansas fan when he spoke on the Birmingham radio show "Next Round" on Monday.

"Yeah I did [see Alabama's offensive performance] and just also saw that Arkansas almost did the same thing," Nix said in reference to the Crimson Tide's 42-35 victory over the Razorbacks. "And just a few of those obviously controversial calls that were in that game raises some questions for sure -- I guess, unless you're an Alabama fan. That's just part of the game.

Nix said the calls go Alabama's way in most games.

"I mean, legitimately -- I think you can watch the game and anybody unbiased would think that something is different," Nix said. "But it is what it is. It's kind of how it's always been, but that's part of the game and they have good players. You can't take that away from them."

Alabama quarterback Bryce Young, who passed for 559 yards and five touchdowns against Arkansas, met with the media later Monday and was asked about Nix's comments. He basically sidestepped the question of whether the Tide benefit from favoritism by the officials.

"That's an external factor," Young said. "That's something as a team we don't look at, we don't control.

"So whatever happens that's out of our control, Coach [Nick] Saban's always talked to us about making sure that we control what we can control and focus on what we can do. So any external factor, that's not really something that as a team we're concerned about."

Hurt will be missed

Cecil Hurt, who covered every Alabama coach going back to Bear Bryant for the Tuscaloosa News and was one of the most respected writers in the SEC, died Tuesday after a lengthy illness. He was 62.

Hurt, a Tuscaloosa native and Alabama graduate, became the News' beat writer for the Crimson Tide in 1982 -- Bryant's last season.

In 1989, Hurt became the News' sports editor and he was also the newspaper's top columnist.

So good was Hurt at his job that Alabama Coach Nick Saban offered a statement on his passing.

"Cecil Hurt was a good friend and one of the best sports writers I have ever had the privilege of working with, not just at Alabama, but all of our coaching spots," Saban said. "He was a man of integrity and a fair-minded journalist blessed with wit, wisdom and an ability to paint a picture with his words that few have possessed.

"Cecil was loved throughout this community and state as an old-school journalist who covered the Alabama beat with class and professionalism. He was a role model for young writers and the most trusted source of news for Alabama football everywhere. He leaves a wonderful legacy as one of sports journalism's best.

"Our thoughts and prayers are with his family and friends as well as Alabama fans everywhere who loved Cecil as much as we did."

It would be appropriate if Hurt is honored in some way at Saturday's Iron Bowl when Alabama plays at Auburn.

SEC West teams are 9-4 against their counterparts from the East going into Friday's Arkansas-Missouri game.

The Razorbacks are looking for a split against the East after losing 37-0 at No. 1 Georgia earlier this season.

Alabama, Ole Miss, Mississippi State and Texas A&M went 2-0 against the East with LSU 1-1 and Auburn 0-2.

The Mississippi schools were helped by playing Vanderbilt, which has lost 20 consecutive SEC games.

Along with Georgia sweeping Arkansas and Auburn, the East's other victories over the West were South Carolina beating Auburn and Kentucky beating LSU.

Barrett Banister, Missouri's senior receiver from Fayetteville, said this week that he plans to give coaching a shot.

It makes sense considering his grandfather, Harold Horton, was a long-time coach and his uncle, Tim Horton, is continuing his lengthy coaching career as the special teams coordinator and running backs coach at Air Force.

"I would for sure regret it if I didn't try," Banister said. "I'm going to try and play football as long as I can and do it to the best of my ability. Then whenever I'm done with that, I'm going to for sure and try to coach."

Banister has another season to play football with the NCAA adding a year of eligibility due to covid-19, but he said he's not sure what he'll do about that.

"I'm literally just focused on this game on Friday," he said of the Tigers' game at Arkansas. "I love Missouri and that's kind of what's on my mind right now."

Georgia Coach Kirby Smart said Davis had been begging to get the ball.

Smart said he didn't think going into the game Davis would get a chance to score in a short-yardage situation.

"It was almost fate that he got the opportunity because we weren't going to do it in the middle of the field," Smart said. "The opportunity arose, I thought it was a great idea and he handled it well."

Ed Orgeron, who will work his final game in Tiger Stadium against Texas A&M on Saturday, said he appreciates his players saying they want to send him out with a victory.

7(7);Kentucky;8-3;Looking for third in a row over Louisville

In a tough season for the Tigers, Clark has been a bright spot.

Clark, from Baton Rouge Southern Lab High School, leads the nation with 125 tackles, including 71 solo stops. He had a season-high 19 tackles against Ole Miss and has 3 sacks, 2 forced fumbles and 1 interception on the year.

Saturday's game against Texas A&M will be Clark's final game for the Tigers unless they upset the Aggies to become bowl eligible.

Whatever happens, look for Clark to be all over the field making tackles.

LINE Ole Miss is favored by

No matter how much Thanksgiving turkey and stuffing you eat, you shouldn't fall asleep watching the offensive show the Bulldogs and Rebels figure to put on in the Egg Bowl.

Quarterbacks Will Rogers of Mississippi State and Matt Corral of Ole Miss have combined for 7,693 yards in total offense.

Rogers and Corral are 1-2 in SEC total offense and fourth and ninth nationally averaging 367.4 and 332.0 yards, respectively.

Missouri at No. 25 Arkansas

No. 1 Georgia at Georgia Tech

No. 3 Alabama at Auburn

No. 23 Clemson at South Carolina

156.8 -- All-purpose yards per game for Missouri running back Tyler Badie.

"It's not a talent issue. It's a more attention to detail issue."

-- Florida interim Coach Greg Knox, on the Gators' problems during their 5-6 season.

"Someone said the other day we kind of don't make sense to be here. We get along. Maybe we were brought here to bring a state together. It's football. You really shouldn't hate people just because they went to a certain school."

"This is one of the reasons why I wanted to be at Auburn. ... The Iron Bowl has been a game that everybody's watched. Everybody knows Auburn and Alabama are playing."

-- Auburn Coach Bryan Harsin on preparing for his first game against Alabama. 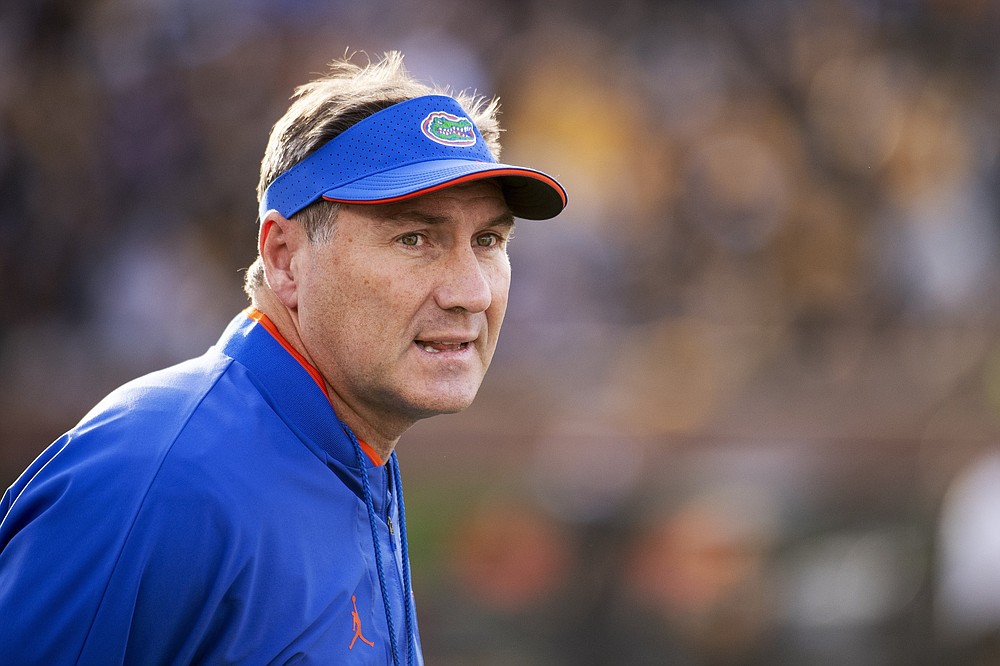 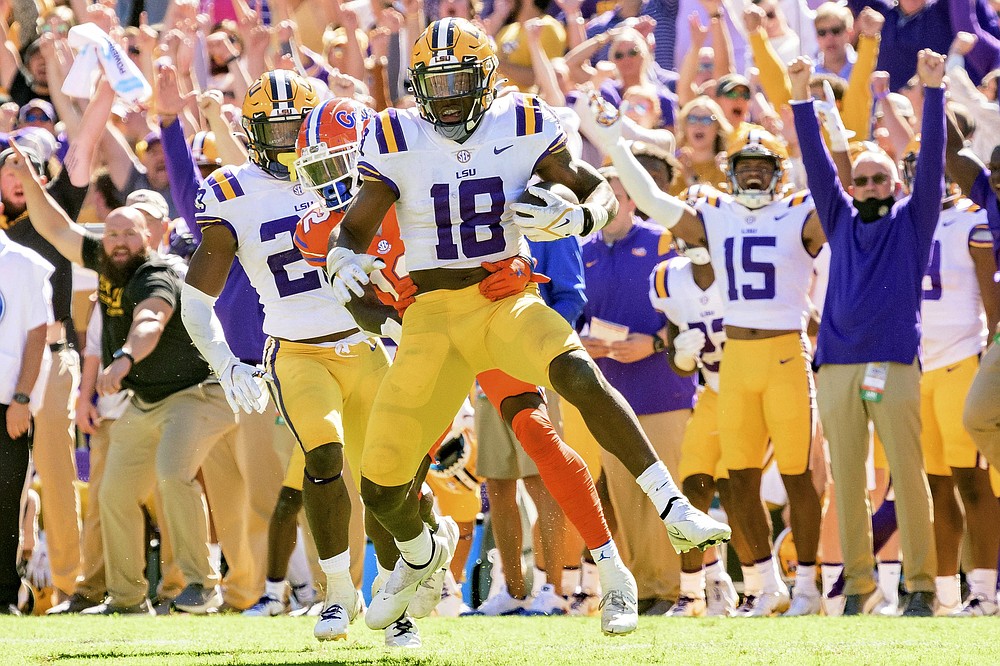 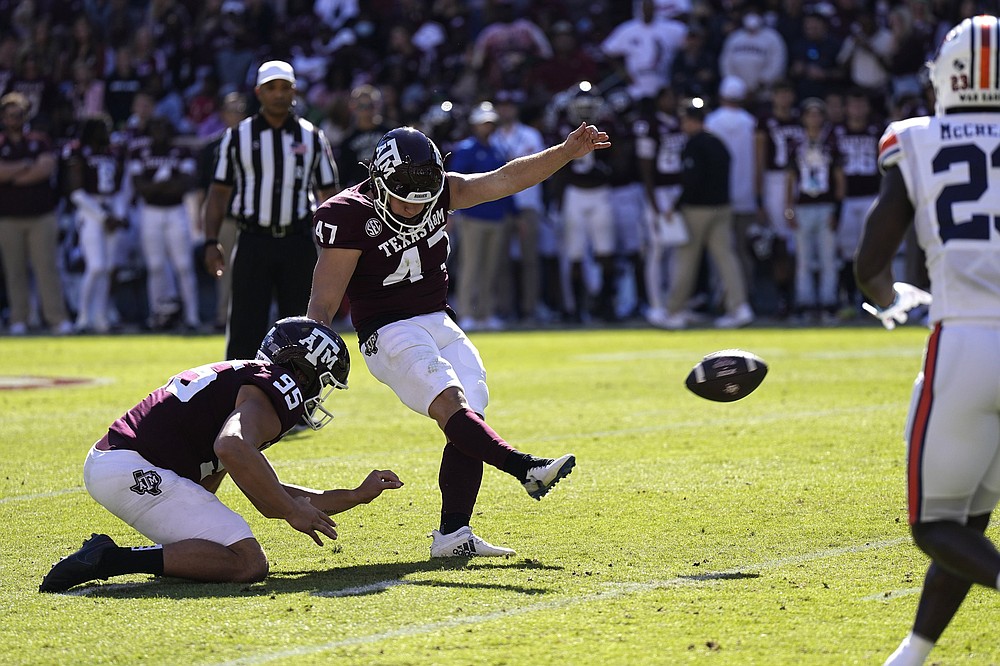