This year, experts say revel but do best to curtail risks by Compiled by Democrat-Gazette Staff From Wire Reports | November 25, 2021 at 4:12 a.m. 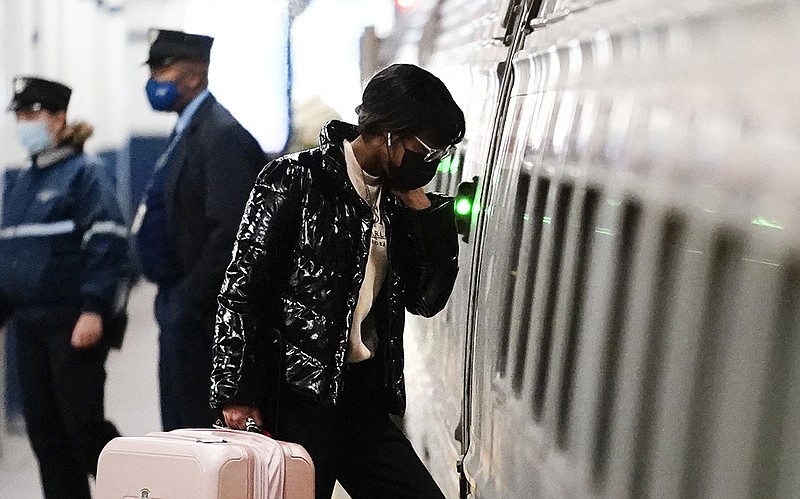 A traveler boards an Amtrak train Wednesday at the 30th Street Station in Philadelphia. Millions of Americans are brushing aside concerns about a resurgence in coronavirus cases to celebrate Thanksgiving with loved ones again. (AP/Matt Rourke)

As tens of millions of Americans celebrate Thanksgiving -- a test for living with the coronavirus instead of avoiding it at all costs -- experts are bracing for the possibility of another winter surge partially fueled by indoor holiday gatherings.

Public health authorities are not begging Americans to skip Thanksgiving or keep get-togethers small, as they did last year before vaccines were available and during the start of a winter wave that would kill thousands a day.

Instead, their focus for Thanksgiving 2021 is all about risk reduction: getting vaccines and boosters, undergoing testing to prevent asymptomatic transmission and, in some cases, celebrating outdoors or while masked. And they urge extra vigilance when Thanksgiving gatherings include elderly or immunocompromised people who would have a harder time fighting off the virus even if they are vaccinated.

Two-thirds of Americans are planning to celebrate Thanksgiving with about as many people as they did before the pandemic, according to a poll by Monmouth University. Just a quarter plan to celebrate alone or with just their household, compared with half last year.

The Transportation Security Administration is expected to screen nearly as many people this week as it did during the same period in 2019. More than 2.2 million travelers streamed through airport checkpoints Friday, the busiest day since the pandemic devastated travel. From Friday through Tuesday, the number of people flying in the U.S. was more than double the same days last year and less than 9% lower than the same days in 2019.

Airlines were hoping to avoid a repeat of the flight cancellations that dogged Southwest and American Airlines last month. By late afternoon Wednesday on the East Coast, airlines had canceled fewer than 100 flights, an unusually low number, according to FlightAware. The Federal Aviation Administration reported very few airports affected by significant delays.

Auto club AAA predicted that 48.3 million people would travel at least 50 miles from home over the holiday period, an increase of nearly 4 million over last year despite sharply higher gasoline prices.

[Video not showing up above? Click here to watch » arkansasonline.com/1125ship/]

"We are past the phase of broad mandates and telling folks not to gather. But I think Americans still need to be smart," said David Rubin, who monitors national coronavirus trends for the PolicyLab at Children's Hospital of Philadelphia.

"Americans, as fatigued as they are and as much as they'd like to see covid in the background and no longer relevant to their lives, for this holiday season it remains relevant in so many places across the country," Rubin said.

Like many public health experts, Rubin does not want to dissuade people from celebrating holidays, especially the vaccinated who have robust protection against severe illness.

"I have heard from many families who are now able to reunite because of the protection from covid-19 vaccines," Zients said. "There is certainly much to be thankful for this year. For me and my family, we will reflect on how deeply thankful we are that we can safely be together."

Roughly a third of Americans consider gathering with friends and families for Thanksgiving risky, compared with nearly two-thirds last year, according to new Axios-Ipsos polling. While experts aren't discouraging Thanksgiving gatherings, they caution against giving premature thanks for an end to the pandemic.

Infections are rising in nearly every state, particularly in the Upper Midwest, where experts expected upticks because of colder weather driving people indoors. Rubin's team is monitoring metropolitan areas in the Midwest and Northeast as some of the likeliest spots for spikes in the coming weeks. His team also sees rising hospitalizations in the Minneapolis and Denver areas despite high vaccination rates as a warning sign for hospitals elsewhere.

The obvious difference between Thanksgiving 2020 and Thanksgiving 2021 is vaccination. Six in 10 Americans are now fully vaccinated -- and all adults now qualify for boosters, while elementary-schoolers are getting their first shots.

Other aspects of the pandemic have grown worse. There are far fewer mitigation measures such as mask mandates and business capacity limits to limit transmission of the virus. The delta variant that is now the dominant strain infects people far more easily. The delta surge of the summer illustrated how quickly case spikes can overwhelm hospitals and communities, even in highly vaccinated areas.

But the Centers for Disease Control and Prevention hasn't been sounding alarms about the potential for Thanksgiving gatherings to accelerate transmission, instead focusing on providing tips for Americans to celebrate more safely. State and local agencies are largely following the CDC's lead.

"As you can imagine, there is a lot of public fatigue around the pandemic and adherence to any social distancing interventions is much more challenging," Marcus Plescia, chief medical officer of the Association of State and Territorial Health Officials, said by email. "In addition, those at greater risk (i.e., not vaccinated) are least likely to adhere to these interventions."

"The holidays can be a time to spread great cheer and we recommend taking measures including wearing a mask indoors to not spread COVID-19 to loved ones," Natasha Bagdasarian, Michigan's chief medical executive, said in a statement.

The changing threat profile of the virus has prompted some Americans to revisit Thanksgiving plans.

"There was less existential questioning of what we should do last year because it was obvious: Don't do anything. This year is much more difficult because even though the numbers are going up, we have vaccines," said Neil Offen, 75 of Carrboro, N.C.

Thanksgiving is his family's favorite holiday, and his sister-in-law is hosting in Ohio. But his 41-year-son is a kidney transplant recipient whose immune system is suppressed by anti-rejection medication and ineffective at producing antibodies even after three shots of a coronavirus vaccine.

There were no direct flights from Raleigh to Cincinnati available, and Offen and his wife, Carol, didn't want to risk their son being exposed to the virus on four flights and in busy airports. So they decided to drive nine hours instead, with overnight stops at a motel where they could enter their room without going through a lobby.

"Flying would have been faster than driving 18 to 19 hours total through mountains at the end of November, which is not something that any of us had been looking forward to," said Offen. "But you balance the risk with the reward. For my son, he loves to travel and he hasn't been anywhere farther than an hour and a half away in almost two years."

"No one wants to leave Thanksgiving and find out they were the one who brought covid to their grandmother who ended up in the intensive-care unit and died before Christmas," said Lee. "We are not going to get risk to zero, but we can do certain things to ensure we can do all we can to protect our vulnerable people."

Her tips for protection include ensuring guests limit their exposure to others before traveling, unvaccinated attendees presenting negative tests and guests using a rapid testing kit before showing up for Thanksgiving dinner. If wearing a mask the rest of the evening after taking it off at the dining room table seems like overkill, Lee notes vulnerable people are better protected if they are not continuously exposed to the virus.

Thanksgiving marks the first holiday when young American children are at least partially vaccinated after regulators expanded eligibility for the Pfizer-BioNTech vaccine to those ages 5 to 11 earlier this month.

The first doses Caroline Polk secured for her 9-year-old, Layla, and 11-year-old, James, in Colorado gave her peace of mind before they traveled to Nashville to celebrate Thanksgiving. Polk felt even greater comfort knowing her parents, who are hosting, received booster doses, as did her brother.

"I'm still going to be a little bit nervous traveling, but much less so than if they had no protection whatsoever," Polk said before her flight.

Polk, 41, said she worked to further reduce risk by ensuring her children repeatedly sanitized their hands -- wet wipes after security, then proper hand-washing at an airport bathroom, again in the airplane lavatory and first thing when they reached her parents' home. They plan to visit Nashville's iconic Broadway strip during the day to avoid the biggest crowds, with their children masked.

Other Americans, particularly those who not at high risk, are counting on the vaccines to do their job and aren't sweating the possibility of breakthrough infections.

Jonathan Adkins and his husband plan to take his mother, who is in her late 70s and lives in a D.C. retirement community, to Clyde's of Chevy Chase for Thanksgiving dinner because their condo is under renovation. The restaurant is in Montgomery County, Md., which recently reinstated an indoor mask mandate, but Adkins said his mother's biggest question was whether it would be serving dessert.

Meanwhile, the White House said Wednesday that 92% of federal employees and military personnel have gotten at least one vaccine dose, while nearly 5% have asked for exemptions on religious or medical grounds.

The federal rate outpaces that of Americans overall: About 82.2% of adults, or more than 212 million people, have gotten at least one dose. About 71%, or more than 183 million, are fully vaccinated.

Among U.S. civil servants, vaccination percentages range from 86.1% at the Agriculture Department to 97.8% at the Agency for International Development. Percentages of employees asking for exemptions also vary, from 10.2% at the Department of Veterans Affairs to 1.3% at the State Department.

At the largest federal agency, the Defense Department, 93.4% of military and federal personnel have received at least one dose, while 5.5% have asked for exemptions.

Figures from the Office of Management and Budget formed the most complete accounting to date of compliance with a requirement that federal employees be fully vaccinated as of last Monday. Deadlines for uniformed military personnel vary by service.

Although the vaccination mandates issued by President Joe Biden in September define "fully vaccinated" as at least two weeks beyond the sole or second shot, depending on the vaccine, the data released Wednesday characterize employees as vaccinated if they have received at least one dose.

Those requesting an exemption also are deemed in compliance. The remaining 3% have neither shown they are vaccinated nor asked for an exemption.

While the announcement listed figures for only the two dozen federal departments and largest independent agencies, the White House on Monday said compliance was 99% in the Executive Office of the President, which includes White House staff, the Office of Management and Budget and other offices related to the White House.

For those not in compliance, officials emphasized that "it's not a cliff," and that workers will receive counseling to get vaccinated or file for an exemption. Only then would termination be considered.

"We know vaccine requirements work," said White House assistant press secretary Kevin Munoz. "We hope that our implementation sends the clear message to businesses to move forward with similar measures that will protect their workforce, protect their customers, and protect our communities."

White House officials said the data was just a snapshot and the numbers would continue to rise in the days and weeks ahead. There will be no disruptions to government services, the officials said.

Since instituting the initial vaccine-or-test mandate this summer and then the more-restrictive requirement without a test-out option this fall, the White House has believed the federal government could serve as a model for the rest of the nation's employers for how vaccinations could help shepherd a quicker return to normal.

White House officials say the most important lesson for businesses from the federal experience is that once they take the first step toward requirements, their workers will follow. 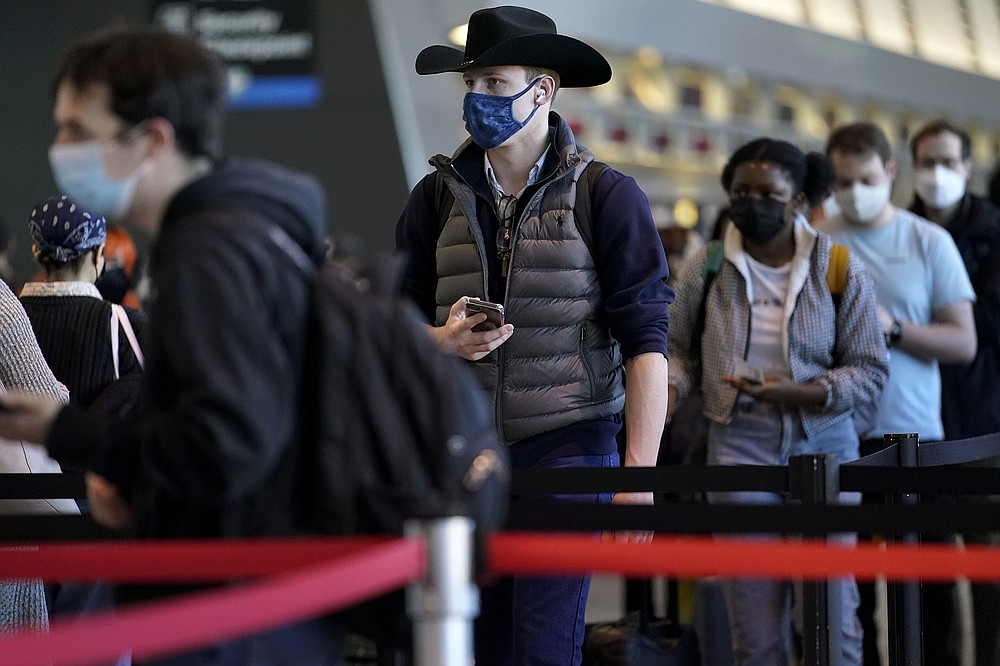