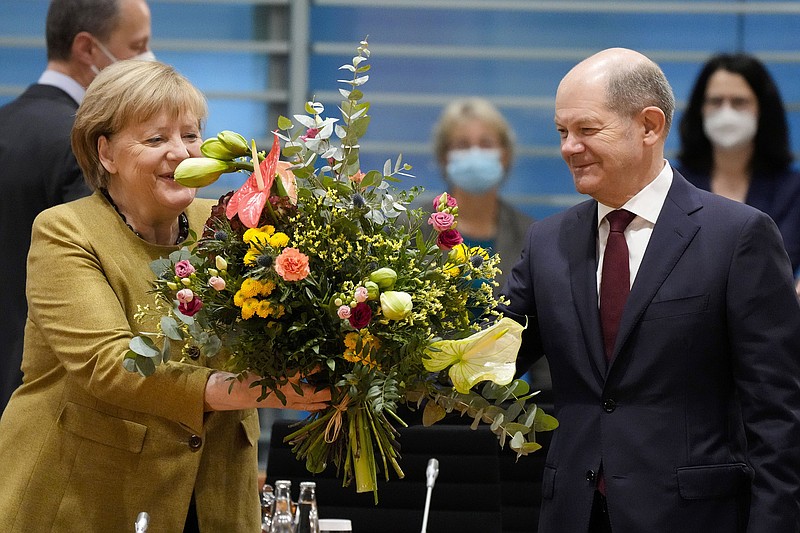 German Chancellor Angela Merkel gets a bouquet from her successor, Vice Chancellor and Finance Minister Olaf Scholz, before a Cabinet meeting Wednesday at the chancellery in Berlin. (AP/Markus Schreiber)

The deal comes after two months of talks after the nation's September election. Merkel, 67, didn't run for a fifth term, and her Christian Democrats will head into opposition after the party's defeat.

Scholz, 63, said the new governing alliance, nicknamed the "traffic light" coalition for the party colors of the three factions, is ready to lead Germany.

"The traffic light is on," he said in a news conference with other party leaders.

For both Germany and wider Europe -- where Merkel had taken on the role of a de facto leader -- it marks the end of an era with Germany often at the center stage of policymaking.

The coalition will shift Germany's leadership a bit to the left after 16 years under the center-right Merkel, who gained plaudits for her handling of a series of crises over the years. She tried to position Germany as a bridge between the West and other nations, including Russia, balancing the trade interests of Europe's largest economy with concerns such as human rights.

Scholz signaled that the country's foreign policy would not change much.

"It's evolution, not revolution," Jurgen Falter, a politics professor at the University of Mainz, said of the coalition agreement.

Scholz's Social Democrats, the environmentalist Greens and the pro-business Free Democrats are set to take the reins just as Germany faces its biggest surge of coronavirus infections, a reality that somewhat overshadowed the launch. Scholz promised that "the new government will do everything necessary to bring us through this time well."

"The situation is bleak," Scholz said, outlining how the new government would require that employees be vaccinated, show a negative test or have recovered from the virus. "The coronavirus is still not vanquished -- unfortunately," he said.

The three-party alliance is a first for a German government and creates strange bedfellows, with two left-leaning parties and one, the Free Democrats, that in recent decades allied with the center-right. But Scholz presented it as a big opportunity.

The new government will not seek "the lowest common denominator, but the politics of big impacts," he vowed.

Scholz said he expects that members of the three parties will give their blessing to the deal within 10 days. The biggest challenge is a vote by the Greens' roughly 125,000-strong membership. The other two parties plan to sign off on it at conventions the first weekend of December, paving the way for parliament to elect Scholz as chancellor the week of Dec. 6.

Scholz has been Merkel's finance minister and vice chancellor since 2018 in the outgoing "grand coalition" of Germany's traditional big parties, in which his party was the junior partner.

He built a reputation as a steady hand, but he will face broader challenges including the migration crisis on the European Union's borders with Belarus.

The crises facing Europe are "becoming more difficult," said Annalena Baerbock, who ran as the chancellor candidate for the Greens and is expected to become foreign minister.

She cited the recent crush of migrants as Belarus' leader, Alexander Lukashenko, opened routes for people from the Middle East and elsewhere in retaliation for EU sanctions.

"Therefore we have together agreed to return to an active European foreign policy, that focuses on the strength of diplomacy and dialogue and relies on a value- and human rights-led diplomacy," Baerbock said.

"We will take over the government in a time of crisis," Green co-leader Robert Habeck acknowledged, describing the coalition deal as a sign of "courage and confidence" that fits the times. "The guiding principle of this government is a society that acts, a state that invests and a Germany that simply works."

Key pledges by the prospective partners include an increase in the minimum wage to the equivalent of $13.50 per hour from the current $10.75 -- a move that Scholz said "means a wage increase for 10 million citizens."

They also aim to get 400,000 new apartments built each year in an effort to curb rising rental prices.

Habeck said the government also plans measures to put Germany on a path to meeting the goals of the 2015 Paris climate accord. It also intends to speed up Germany's exit from coal-fueled power set for 2038, "ideally" completing it in 2030.

Habeck added that instead of formally setting new goals for reducing greenhouse gas emissions, the government will focus on concrete measures including ensuring that the price per ton of carbon dioxide won't fall below 60 euros, or $67.20 -- a measure that will speed up the coal phaseout.

At the Free Democrats' insistence, the prospective partners said they won't raise taxes or loosen curbs on running up debt.

The pro-business party's leader, Christian Lindner, said that "together we have a mission to modernize this country." He proclaimed that "we are going to digitize this state." That's a challenge in a country that has notoriously patchy internet and cellphone coverage and where government services are often offline.

Lindner, who is set to become finance minister, also said the coalition would implement more liberal social policies, including legalizing the sale of cannabis for recreational purposes in licensed shops.

The new government plans to place a greater emphasis on the welfare and participation of children and young people. The coalition deal says it will aim to lower the voting age in European elections from 18 to 16, and to change Germany's constitution so 16-year-olds can also vote in federal elections.

Looking beyond Germany, Scholz stressed the importance of a strong Europe, friendship with France and partnership with the United States as cornerstones of the new government's foreign policy -- continuing the long post-war tradition.

It's typical in Germany for coalitions to draw up detailed agreements for their four-year terms; this one runs to 177 pages.

The Social Democrats will get seven Cabinet ministers, including the defense and health portfolios, as well as the chancellery. The Greens will get five, including the foreign minister and a minister for economy and climate protection, a new combination. Neither party announced who would get those jobs.

The Free Democrats will get four ministries, including the key finance portfolio that goes to Lindner.

Lindner acknowledged that the unexpectedly leak-free talks were "extraordinarily discreet." But he added: "I can assure you that the talks were just as argumentative as they were discreet -- we argued over some individual sentences for hours."

It is not the most natural of alliances. The Social Democrats' aims of strengthening the welfare state and the environmental policies of the Greens have not sat easily with the Free Democrats and their aversion to tax increases.

Lindner said talks were hard at times and the parties did not hide their differences.

But negotiators beat their promise to have a new coalition in place before Christmas and have tried to present a united front.

Merkel's Christian Democrats are currently preoccupied with a contest over who will become their next leader and try to revive the party's fortunes after it suffered its worst election results since it was founded just after World War II.

Information for this article was contributed by Geir Moulson and Frank Jordans of The Associated Press; and by Loveday Morris and Vanessa Guinan-Bank of The Washington Post.