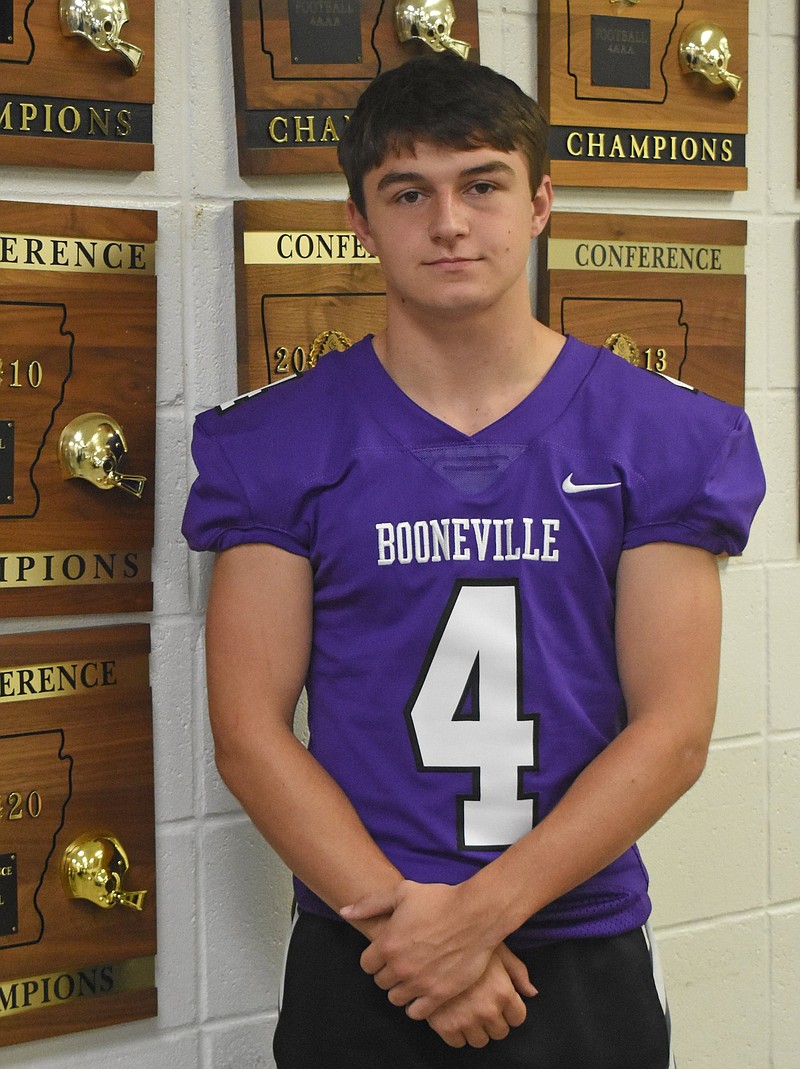 BOONEVILLE -- Rocky Ross is the least heralded of the four backs for the Booneville Bearcats.

The quartet of quarterback Randon Ray, fullback Rylen Ray and halfbacks Dax Goff and Ross have combined for 3,761 yards on the ground and 60 rushing touchdowns.

All of them are over 800 yards and complement each other, but Ross is the true home run hitter of the four.

Ross has run for 803 yards on only 47 carries, averaging 17.1 yards per tote, most of which are on option pitches from Randon Ray.

"The option is a big part of our game," Ross said. "That's the one that I normally score on. Those option plays can turn into runs right down their face."

Randon Ray does keep on a lot of those after taking the ball from the fullback's belly. He leads the team in attempts with 139, but when he does pitch it, watch out, because Ross is the fastest Bearcat on the field and in school history as the record holder in 60 and 100 meters.

His 59-yard touchdown run against Paris was atypical.

"I did my pitch path, and I look at Randon and I think he's about to run the ball," Ross said. "Then I look out and see nothing but open grass right in front of me. I looked at him and he looked at me, and tosses the ball right on over. That's the best feeling in the world when you've got that relationship with the quarterback."

That touchdown run put Booneville up 14-3 in the first quarter and the Bearcats went on to a 41-22 win.

It is Ross, though, that features that breakaway speed. He's scored 11 touchdowns this season, including runs of 64 and 66 yards against Mena, 74 yards against Atkins and 52 yards last week against Manila. He has averaged 40.3 yards on his 11 touchdown runs.

The quartet contributes their success to a young offensive line that has grown up exponentially through the season.

The backfield basically grew up together, so the pitch and catch is routine for these Bearcats.

"We've been doing this since the third grade, pitching it to each other and running around," Ross said.

Ross and the rest of the Bearcats host Glen Rose in the quarterfinals of the Class 3A playoffs on Thursday.

Lamar won their second-straight game by a single point in Friday's 24-23 win over Prairie Grove in the second round of the Class 4A playoffs.

Lamar scored with 2:36 left on a 3-yard run by Damien Hendrix, lined up for the two-point conversion and drew Prairie Grove offsides to move the ball inside the 2 after which Hendrix powered in for the two points and a 24-23 lead.

"You can call us the overachievers," Lamar Coach Josh Jones said.

Or the Cardiac Warriors.

"Or that, too," Jones said. "They're playing really, really well. They get along with each other really well, and they are as much of what you call a team. They do everything right in order to win."

For the game, Lamar had 76 rushes for 361 yards and three touchdowns. Lamar's longest run of the night was 14 yards by Tony Balmer, who led the Warriors with 122 yards. The Warriors also had two runs of 13 yards and one of 12 yards and averaged 4.8 yards per carry. The 76 rushing attempts ties the single-game state record with Cabot in 2011, according to the Arkansas Activities Association Record Book.

It's exactly what the Warriors need against Pulaski Robinson in the quarterfinals of the Class 4A playoffs on Friday.

"There may be a million scenarios but that's the one scenario that we can win," Jones said.

The Pirates concluded one of their most successful seasons ever on Friday night with a loss at Hoxie in the second round of the Class 3A playoffs.

Cedarville finished 9-3, matching the 1999 team with nine wins and also winning their first home playoff game since that season with its first-round win over Atkins.

"These seniors have set the bar high," Cedarville Coach Max Washausen said. "We had the ball inside the 10 three times and did not score. Obviously, we were going to have to score every chance we had, but we lost to a really good team. Looking back through the whole season, it was one to remember."

Kattich ran 28 times for 210 yards on Friday, marking his fourth straight game over 200 yards and 12th in his career.

Kattich finished the season with 2,108 rushing yards and 19 touchdowns after running for 2,009 yards and 25 touchdowns as a junior.

He wrapped up his career with 5,668 yards and 62 touchdowns on the ground in his career.

"I was looking at the list, and he's a couple of hundred yards away from Madre Hill," Washausen said. "He only had two games under 100 yards in three years. We had a group of linemen that were undersized but really learned the ins and outs of our system. We're never asking them to block a guy straight head up on them, we're angle blocking everything and pulling and kicking."

Fort Smith Northside needed a good start on Friday at No. 1 and three-time champion Bryant, but didn't have the opportunity.

Ty Massey reeled off an 8-yard run on Northside's first play of the game, but a holding call on a receiver wiped out the play and moved the Grizzlies back to their 30. A sack resulted in a loss of 11 yards, the Grizzlies gained a yard and then had a third-down play for no gain and punted.

"I thought the receiver that got called for holding was busting his tail," Northside Coach Mike Falleur. "He was getting after it."

Instead of second and two at the 48 with early momentum, the Grizzlies ended up punting from their own 20.

"That was big," Falleur said. "Then the next series, we drop the slant for a first down, and then we punt. We did not get off to a good start. Things then went south."

Bryant went on to win, 42-10, to advance to the semifinals while Northside finished 7-5.

"These guys worked their tails off from last January," Falleur said. "We knew all along that this was a great group of kids that was fun to be around. They came in every day and did a great job. It didn't end the way we wanted, but it was a fun season."