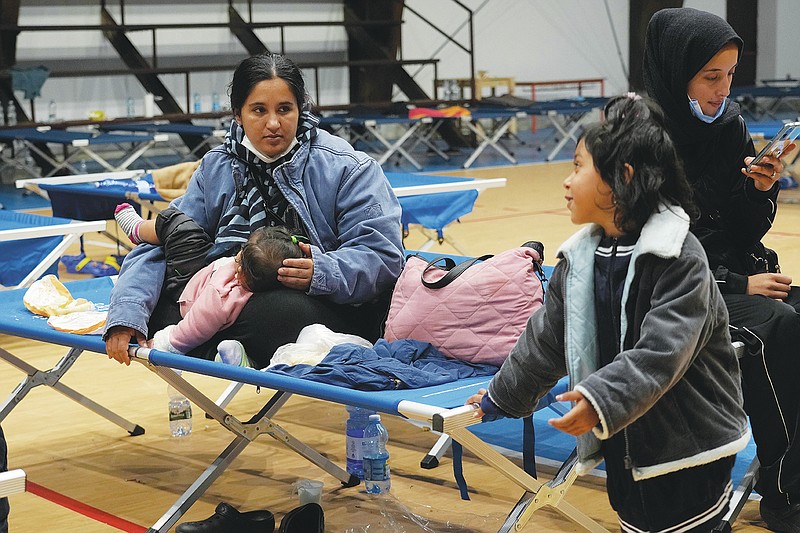 Tooba, left, and Zakia, sister and wife of Hamid wait to leave a temporary shelter set in a gym in Monasterace, Calabria region, Southern Italy, Thursday, Nov. 11, 2021. When the Taliban took Kabul in August, Hamid was working as an auditor, his 24-year-old wife was in her first year of university studying economics. They decided to flee with five other family members beginning a two-month odyssey through Iran and Turkey and across the sea packed below deck on an expensive sailboat that left them on a beach in Calabria on November 10th dehydrated, hungry and wet, but alive and relieved to be in Europe. (AP Photo/Alessandra Tarantino)

ROCCELLA JONICA, Italy -- When the Taliban took Kabul in August, Zakia was six months pregnant and in her first year of university while her husband, Hamid, was working as an auditor. They decided to flee, and along with five relatives, began a two-month odyssey that took them through Iran and Turkey.

When it was time to cross the Mediterranean, they did so on an expensive sailboat that came ashore this month on a beach in the southern Italian region of Calabria.

They were dehydrated but relieved to have survived a lesser-known migration route to Europe that is increasingly being used by wealthier Afghans, Iraqis, Iranians and Kurds. Entire families are paying top price for passage from Turkey aboard new or nearly new sailboats that can more easily avoid detection by authorities. Investigators say they are captained by smugglers, often Ukrainians, who may be in cahoots with Turkish mobsters and Italian 'ndrangheta clans on shore.

While aid workers call these "1st class" crossings, there is nothing elite about them. Hamid and Zakia were packed with 100 people below deck for a week as food supplies dwindled. After two days without fresh water, Zakia couldn't feel the baby moving inside her anymore.

"It was the worst experience of my life," Hamid said in an Italian gym as he and his wife waited to be processed for covid-19 quarantine locations after their sailboat, "Passion Dalaware," came ashore Nov. 10.

For years, most political, humanitarian and media attention has focused on the hundreds of thousands of migrants, most of them Africans, who cross the central Mediterranean aboard unseaworthy vessels launched by smugglers from Libya and Tunisia.

The Calabrian route, which brings the migrants from Turkey to the "toe" of boot-shaped Italy rather than Sicily and its islands farther south, has seen a nearly four-fold increase in arrivals in 2021 and now accounts for 16% of the sea arrivals in Italy this year.

The U.N. High Commissioner for Refugees is monitoring the situation closely, though the increase in Calabrian arrivals is mirrored by a similarly sharp increase in migrants arriving in Sicilian ports. Overall, sea arrivals in Italy this year are up to 59,000 compared with 32,000 at this point last year. The Calabrian route has seen 9,687 arrivals as of Nov. 14, compared with 2,507 last year.

"We are seeing Afghans. We are seeing Iraqis. We are seeing Iranians, Kurds," said Chiara Cardoletti, the UNHCR representative in Italy. Whereas single men used to account for most migrants, "right now on all the routes what you are seeing is an increase in the number of families arriving with lots of children. And that is true also for the route to Calabria."

The Calabrian route is just one of the myriad ways that would-be refugees from the Middle East, Southeast Asia and Africa try to reach Europe, a steady crisis that has fueled anti-immigrant sentiment on the continent and strained European Union solidarity.

Hamid and Zakia had a fraught odyssey that cost far more than most: After escaping Kabul with Hamid's sister, her husband and their three children, the family arrived in Turkey and paid $9,600 for each adult and $4,500 for each child to get to Calabria. Hamid's parents in Sweden helped finance the trip.

Hamid's 29-year-old sister, Tooba, who speaks good English, said the family decided to risk their lives on the journey because life in Afghanistan under Taliban rule was no longer safe, especially given her work as a lawyer.

"I cannot live in Kabul, and because of them I must leave Afghanistan," Tooba said, as she cradled a sleeping child.

Like Hamid and Zakia, she asked that her last name not be used for safety reasons.

Hamid said the smugglers provided enough water for the first four or five days, but that after it ran out, the passengers drank seawater with sugar for the final two days.

When the sailboat approached shore, the passengers came up on deck only to see the two smugglers who had captained the ship, both wearing ski masks, fleeing the scene in a black boat.

"The traffickers, who obviously have no concept of human scruples, are now even squashing 100 people in each sailboat," said Vittorio Zito, the mayor of Roccella Jonica, a small town on the Calabrian coast that has been a prime destination for smugglers.

The sailboats are difficult to intercept since even to aerial patrols, they look like normal pleasure boats. The "Passion Dalaware" was even flying a plastic American flag from its sail.

There have been so many of these deserted sailboats recently that their carcasses line the Calabrian coast. Others are piled up in a boat cemetery near the port in Roccella Jonica.

The route is also being used by smugglers bringing fishing boats from Libya. On Nov. 14, 550 migrants arrived in Roccella Jonica, the highest number in one day. The migrants, including at least 100 Egyptian minors, were rescued from two fishing boats off the coast that had departed from Tobruk, a town in Libya near the Egyptian border.

Italian police have arrested several Ukrainian smugglers who have been sentenced for aiding and abetting illegal migration, but they are just small cogs in the wheel of a larger criminal operation.

"We have to go beyond the individual boats and arrests of smugglers to understand the reason behind the exponential increase," said Giovanni Bombardieri, chief prosecutor in the Calabrian capital of Reggio Calabria, who is leading the migration investigation.

"It is clear that our work requires an evaluation of the possible involvement of clans of the 'ndrangheta," the Calabrian-based organized crime syndicate, he told the AP.

Hamid and Zakia's odyssey isn't over. The extended family has been put in different locations in Calabria to complete two weeks of virus quarantine. After that they can begin the process of requesting asylum or can try to reach relatives in Sweden.

There is also some good news.

"I am very happy," said Zakia. "The Italian doctors checked, and my baby is OK." 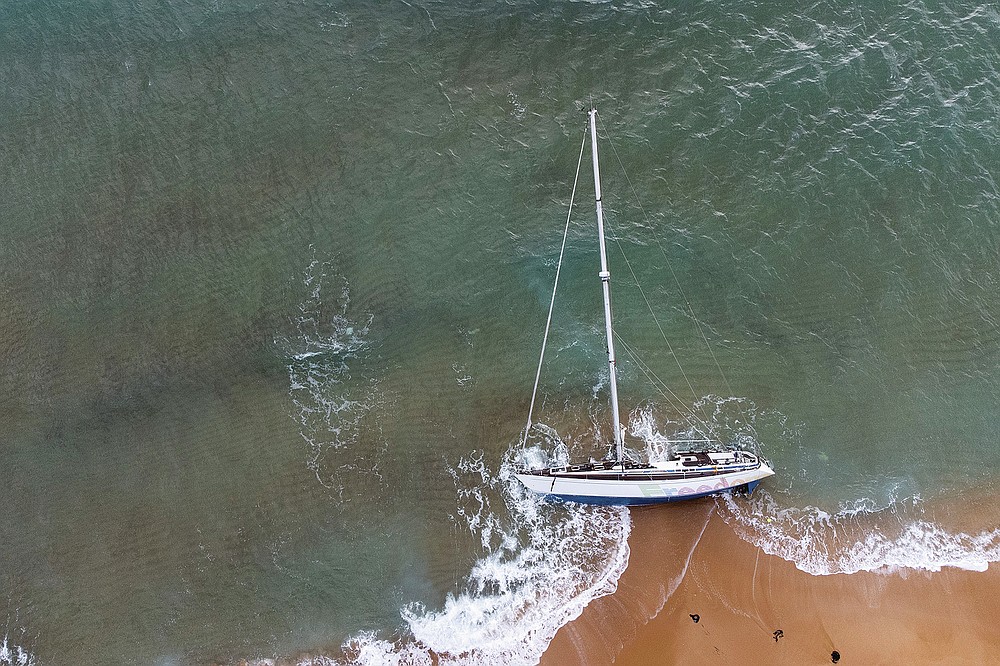 A sailboat used by smugglers to transport migrants and refugees is beached on Le Cannelle beach in Isola Capo Rizzuto, Calabria region, Southern Italy, Saturday, Nov. 13, 2021. Thousands of refugees have arrived in Italy this fall by a lesser-known migrant route, the Calabrian route from Turkey, paying heftier smuggling fees to travel on recreational sailboats that can be less conspicuous than the crammed inflatable boats used in the Central Mediterranean. (AP Photo/Alessandra Tarantino)