Something about Sam: There’s not much to find wrong with Pittman 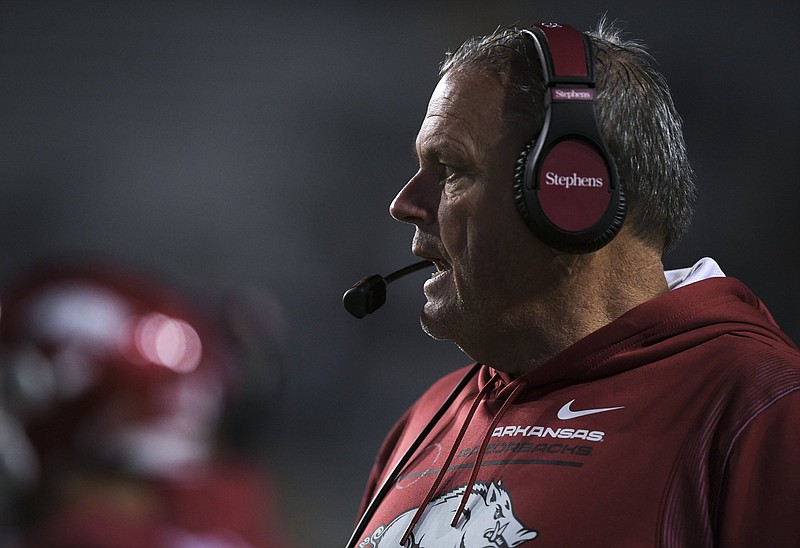 FAYETTEVILLE -- To hear those around him tell it, University of Arkansas Coach Sam Pittman is what amounts to a kind of Pied Piper of football coaches.

But instead of luring rats out of town to drown in a river like Pied Piper legend, Pittman orchestrates harmony and success for a football program by preaching positive communication, belief in each other, toughness and togetherness.

Some prominent coaches have earned the reputation of being hard to work or play for. Pittman is the opposite of that, according to Arkansas coaches and players.

Razorback fans convening around Thanksgiving dinners today have been assured Pittman views Arkansas as his destination job, a plus he had over the other contenders, with the exception of former Razorback Barry Lunney Jr., for the head coaching post in December 2019.

No doubt Pittman has pushed many of the right buttons in short order to help restore an Arkansas program that had been in the depths of despair for three long seasons and a non-contender in the SEC West for most of the last decade.

The tough, but caring style, of Pittman and his staff attracted 10 super seniors back for another year of the grind and camaraderie, the joys and pain of a football season.

Pittman has the support of at least one colleague for SEC Coach of the Year.

"Obviously, to me, Sam would be my vote for SEC Coach of the Year," Missouri Coach Eli Drinkwitz said Monday.

"When you look at what Sam has been able to do with that team, and the staff he's hired, the players he's recruited and the way that they're playing, he's reinvigorated that state for their football program," Drinkwitz said.

Pittman was clearly heartened by having the super seniors believe in the program to the point they'd push themselves through another year, even after finishing 3-7 in his debut season.

The Razorbacks had lost 15 consecutive trophy games against Texas A&M, LSU and Missouri before claiming the Southwest Classic Trophy with a 20-10 win over the Aggies on Sept. 25.

"I found out from Grant, I didn't know this: I show the trophy each time we have a trophy game and they had never seen it," Pittman said. "You know, we don't have a guy on our team that won the Battle Line, the Southwest Classic or the Boot.

"We don't have a guy until this year that's ever been in the game and we beat LSU or A&M or Missouri and so, then to come back and have a chance to win one of those trophies or beat those guys and see them able to do that is really fulfilling as a coach."

"I think it's everything that I thought it would be," Cunningham said. "I came back to leave the program better than I found it, and I think we've done a great job of that as the senior class."

Fourth-year senior Joe Foucha said he's given some thought to taking advantage of an extra year next season, and if he does, Pittman's style would be a key factor.

"He would play a huge role," Foucha said. "I have a lot of respect for Coach Pitt and the things he has done with the program and how he's trained my mind just to go get it no matter the circumstance, the blue-collar chip. The things he talks about, I feel like that's the kind of player I am. I've got a chip on my shoulder, so I feel like he would play a huge part in it."

Pittman said he could't project the immediate impact his staff would have on the program, starting with a halftime lead in last year's opener against well-respected Georgia.

"I knew I had really good coaches," he said. "I knew we were able to hire good coordinators and good position coaches and strength coaches and all those things, so I knew we had a chance there from the coaching aspect and the leadership aspect.

"I really didn't know a whole lot about what we had on the team. I think the biggest thing we did was we came in and the guys on the team weren't Coach [Bret] Bielema's or Coach [Chad] Morris' kids, they were ours. ... We didn't try to run one guy off, nor did we try to keep anybody. I think we treated them all about the same."

Pittman said convincing the players they could win and setting a standard throughout the program were keys for the Razorbacks' success this season.

"The expectations were high for all of them, regardless of whether they're a [Treylon] Burks a [KJ] Jefferson or a Morgan or whoever it may be, to a walk-on guy that's helping us on the scout team. Because he's got a lot a lot of value," Pittman said.

During interviews in the course of the last two seasons, one Razorback after another has delivered a testimonial to Pittman's powers of creating a positive vibe around the program.

"Playing for him these last two years, I wouldn't have came back if it was with anybody else," Morgan said. "If it was any other coach I wouldn't have come back this season. It shows right here what we have going for us, and we're on the rise because we do have another game. We're not a plateau team. We're a team that keeps getting better and better, and I hope these last couple of weeks have shown that."

Jefferson, the sophomore quarterback, echoed Morgan's thoughts during his postgame remarks after a 42-35 loss at No. 2 Alabama.

"We're in a great spot," Jefferson said. "Alabama's a great team and just going to the wire with a great team like that lets us know we're headed in the right direction. ... This program is just on the rise." 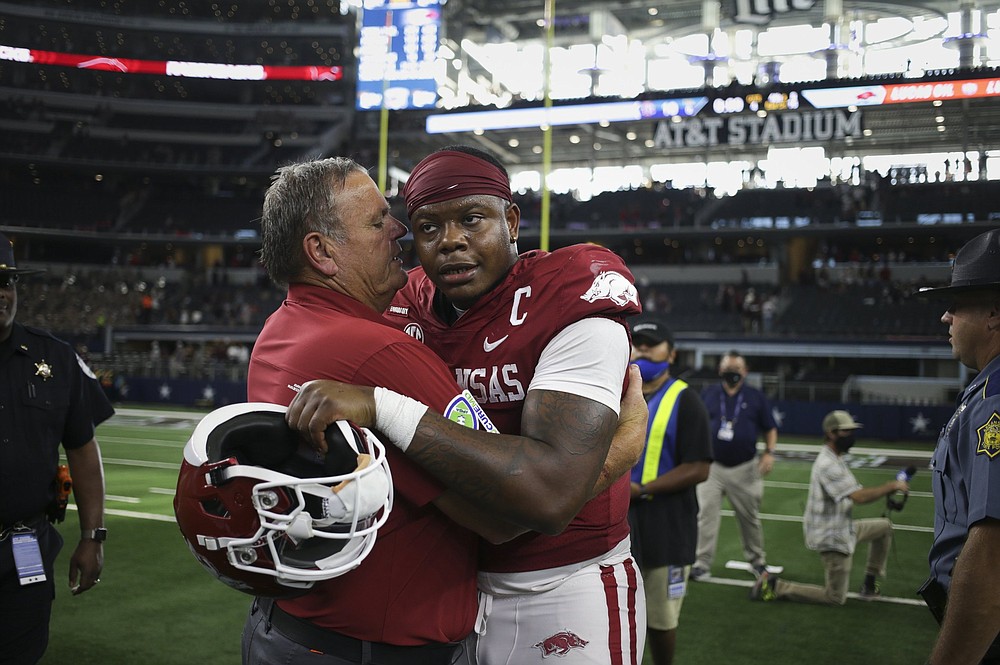 Coach Sam Pittman (left) talks to quarterback KJ Jefferson after Arkansas’ victory over Texas A&amp;M on Sept. 25 in Arlington, Texas. Pittman has led the Razorbacks to seven victories and a bowl game in his second season in charge. (NWA Democrat-Gazette/Charlie Kaijo)

Print Headline: Something about Sam