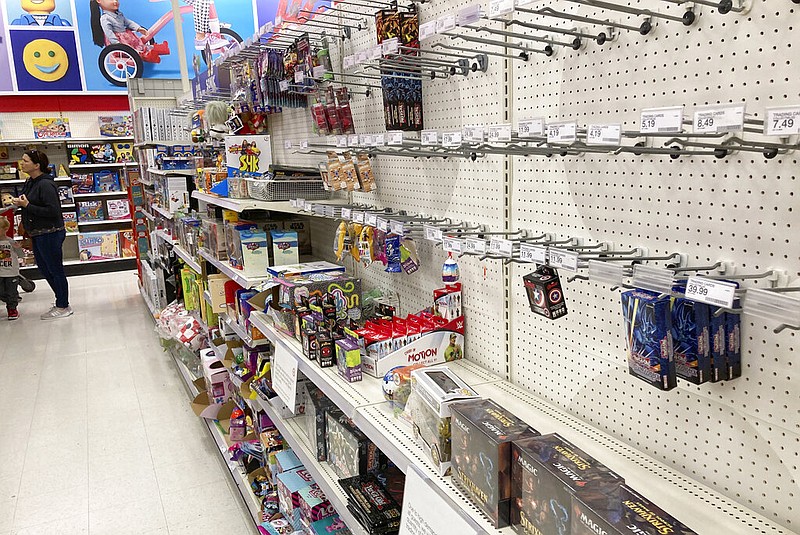 A shopper passes by empty racks used for displaying toys in a Target store in Lakewood, Colo., in this Oct. 26, 2021, file photo. (AP/David Zalubowski)

WASHINGTON -- U.S. consumer spending rebounded by a solid 1.3% in October despite inflation that over the past year has accelerated faster than it has at any point in more than three decades.

The jump in consumer spending last month was double the 0.6% gain in September, the Commerce Department reported Wednesday.

At the same time, consumer prices rose 5% compared with the same period last year, the fastest 12-month gain since the same stretch ending in November 1990. The surge in prices this year did contribute to the 1.3% rise in spending in October, yet adjusting for inflation, spending was still up a solid 0.7% after a 0.3% inflation-adjusted gain in September.

Personal incomes, which provide the fuel for future spending increases, rose 0.5% in October after having fallen 1% in September, a reflection of a drop in government support payments.

Pay for Americans has been on the rise with companies desperate for workers, and government stimulus checks earlier this year further padded their bank accounts. That bodes well for a strong holiday season and major U.S. retailers say they're ready after some companies, like Walmart and Target, went to extreme lengths to make sure that their shelves are full despite widespread shortages.

Analysts said the solid increase in spending in October, the first month in the new quarter, was encouraging evidence that overall economic growth, which slowed to a modest annual rate of 2.1% in the third quarter, will post a sizable rebound in the current quarter, as long as the recent rise in covid cases and concerns about inflation don't dampen holiday shopping.

There are regions in the U.S. experiencing a surge in covid-19 cases that could get worse as families travel the country for the Thanksgiving holiday.

The 5% rise in consumer prices shown in Wednesday's report continued a string of high readings over the past several months as demand outstrips supply, reflecting in part shortages caused by snarled supply chains.

President Joe Biden acted Tuesday to counter spiking gasoline prices by ordering a release from the nation's strategic petroleum reserve, but economists expect that move to have only a minimal effect on the surge in gas prices.

The data released Wednesday, including the peek into what Americans are paying for everyday goods, is preferred by the Federal Reserve because it tracks changes in what people are buying, unlike the consumer price index, which measures a fixed market-basket of goods.

The Fed seeks to conduct its interest-rate policies to achieve annual gains in its preferred price index of around 2%. However, over the past two decades, inflation has perennially failed to reach the Fed's 2% inflation target.

Fed officials at their November meeting announced the start of a reduction in its $120 billion per month in bond purchases, which the central bank had been making to put downward pressure on long-term interest rates.

That marked the Fed's first maneuver to pull back on the huge amount of support it has been providing to the economy. Economists expect that will be followed in the second half of 2022 by an increase to the Fed's benchmark interest rate, which influences millions of consumer and business loans. That rate has been at a record low of 0% to 0.25% since the pandemic hit in the spring of 2020.

And if inflation continues to overshoot the Fed's target, which Fed Chairman Jerome Powell for months has described as transitory, economists say the odds are increasing for an accelerated reduction in the Fed's monthly bond purchases, as well as earlier action on its first interest rate increases.

With spending up more than incomes, the personal saving rate fell to 7.3% in October, down from 8.2% in September, but still a high level.

The National Retail Federation predicts that November and December holiday retail sales -- in-store and online -- will be up 8.5% to 10.5%. That would be record growth and a record high in total sales.

Online sales will grow even faster, the federation predicts. Still, shoppers have shown rising interest in visiting stores. Nationally, online sales dipped to 13.3% of overall retail sales in the second quarter, down from a high set a year earlier, according to the U.S. Census Bureau.

Adriane Booker of Snellville, Ga., said she already has bought more gifts for this Christmas compared with 2020.

Unlike a year ago, she's ventured out into stores. Double-masked and wearing gloves, she shopped earlier than normal and finished weeks ago so she could avoid crowds. She even picked up a gift for herself: a Wi-Fi karaoke system.

"Last year I felt like Christmas was a little bit robbed," she said.

Economists say many Americans are primed to spend, having built up savings after curbing purchases earlier in the pandemic and collecting government stimulus dollars. October retail sales nationally soared about 16% from a year earlier. But at the same time, consumer prices surged 6.2%, the biggest jump since 1990.

For the second year in a row, Walmart and Target will close on Thanksgiving, repeating the move as retailers across the country scramble to hire or retain employees, with millions fewer Americans working than before the pandemic and more people quitting their jobs than ever before.

Here are some retailers' plans for Thanksgiving and Friday:

• Walmart will spread out its Black Friday discounts to three events throughout November.

• Most Target stores will reopen at 7 a.m. Friday.

• The Costco store in Little Rock will reopen at 9 a.m. Friday.

• Friday hours at Best Buy may vary from normal operation, with some stores opening as early as 5 a.m.

• TJX Cos. -- T.J. Maxx, Marshalls, HomeGoods, Sierra and HomeSense stores -- most stores are scheduled to reopen at 7 a.m. Friday.

Information for this article was contributed by Martin Crutsinger of The Associated Press; by Reade Pickert of Bloomberg News (WPNS); by Coral Murphy Marcos of The New York Times; and by Matt Kempner of the Atlanta Journal-Constitution.