State scrutinizing care group for more than 20,000 Arkansans with disabilities 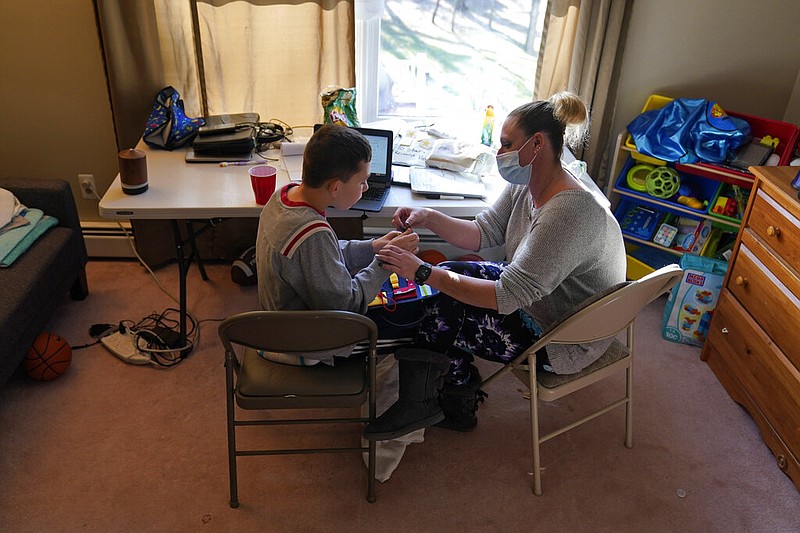 Paraprofessional Jessica Wein helps Josh Nazzaro stay focused while attending class virtually from his home in Wharton, N.J., in this Nov. 18, 2020, file photo. The teenager has autism and is nonverbal, and has needed online group speech therapy sessions with help from aides. (AP/Seth Wenig)

State regulators must decide by next week whether Empower Healthcare Solutions LLC, one of the largest managed care providers for Arkansans with developmental disabilities, can continue offering services to clients after Dec. 31.

Should the Arkansas Department of Human Services determine that Empower is not fit to continue, some 20,000 of the group's clients will receive notification by mail before the end of the year that Empower "cannot continue to participate in the program," and those beneficiaries would be transitioned to another provider, a Human Services spokesperson said in a statement to the Arkansas Democrat Gazette.

The deadline for Empower to complete its readiness review by the Department of Human Services was Wednesday. The agency likely will not make its determination until sometime next week.

"We continue to work with DHS to complete demonstration of operational readiness, but from my perspective we have no gaps or issues of concern," Mitch Morris, Empower's chief executive, said in an email. "Empower is ready to continue providing services to Empower members in addition to maintaining all business operations in accordance with applicable requirements."

Empower Healthcare has been embroiled in an ongoing battle with one of its former shareholders, Boston-based Beacon Health Options Inc.

Beacon, one of six stakeholders in Empower, owned a 16.66% share of the entity since it was formed in 2017, and contracts with the company to provide administrative services and to assist in day-to-day operations at the Little Rock offices the companies share.

The remaining five owners are other health care providers, which, in Arkansas, are required to have a majority stake in the Provider-led Arkansas Shared Savings Entity (PASSE) program.

The split between Empower and Beacon and the turmoil between the two companies has resulted in increased scrutiny from regulators, including the Department of Human Services, which required Empower to undergo a "partial readiness review" to determine whether Empower had the capacity to continue to provide care to its clients.

Empower is one of four companies participating in the PASSE program. The participants in this program, created by Act 775 of 2017, receive millions of dollars from the state Medicaid program each month to pay for the services of the more than 50,000 qualifying Arkansans with significant mental illnesses or developmental disabilities.

Such care ranges from nursing services and speech therapy to inpatient psychiatric stays and medical equipment. A lot of money is involved, with participating companies earning tens of millions of dollars annually. In 2020, Empower generated revenue of more than $460 million, according to company documents.

Legislation passed earlier this year prohibited companies from owning stakes in more than one PASSE. In March 2020, the Indiana-based insurance giant Anthem Inc. announced that it had finished its acquisition of Beacon Health Options.

Anthem also owns a stake Summit Community Care, another Arkansas PASSE and competitor to Empower. That acquisition forced the separation of Beacon from Empower.

Over the summer, the state Department of Human Services began requesting details of Empower's transition plan away from Beacon Health.

In a document dated July 30, 2021, Empower outlined additional information requested by the Division of Medical Services, a branch of the Department of Human Services that manages the state's Medicaid program.

Since then, the transition has become fraught with contention after Empower filed a lawsuit against Beacon, accusing the behavioral health services company of sabotaging its business operations in Arkansas to benefit rivals.

The complaint, filed at the beginning of November in the U.S. District Court for the Eastern District of Arkansas, claims that after the acquisition of Beacon by Anthem Beacon the company "began taking actions clearly designed to harm Empower," according to court documents.

"Since the merger, Beacon has engaged in conduct that suggests that it is functioning as a Trojan-horse for Anthem seeking to destroy Empower, Summit's competitor, from within," the documents said.

Beacon Health officials could not be reached for comment.

Empower said it learned of the merger agreement with Anthem "when it was announced in the news on June 6, 2019 after it was fully negotiated by Beacon, its [Empower's] business partner," the documents said.

In the suit, Empower outlines examples of alleged contract breaches by Beacon as well as restructuring conversations "that quickly became acrimonious" and services, data and personnel issues that Empower said Beacon failed to resolve to complete the transition.

The lawsuit prompted the Department of Human Services to issue a "notice of immediate sanction" against Empower Healthcare Solutions on Nov. 16 on grounds that the information outlined in court documents is contrary to the transition plan provided to the agency at the end of July.

The intermediate sanction resulted in the suspension of "all new assignment, enrollment and voluntary transitions to the [Empower] PASSE, including automatic mandatory assignment an enrollment, effective Nov. 19, 2021," according to the letter, addressed to Morris, the Empower CEO.

"The sanction is imposed due to Empower's misrepresentation of information provided to DHS," the letter said.

"Per its July 30, 2021, letter to the DHS, Empower identified certain areas that would change due to the transition away from Beacon," the Human Services department's letter said. "Empower represented that the issues identified in the letter were the only areas that were changing, and therefore a full readiness review was not necessary."

Among its concerns, the agency cited Empower not having "administrator rights' access for the website, and the ownership of the website may be in question," the letter said.

Two days later, Marshall S. Ney, an attorney with the Little Rock-based Friday, Eldredge & Clark LLP that represents Empower, responded to the Nov. 16 intermediate sanction with a letter firing back against the action.

"To be clear, there was no misrepresentation, and as such, the claimed basis for sanction is erroneous and entirely without merit," Ney said in the letter to the Department of Human Services, dated Nov. 18, 2021.

"Empower demands that DHS immediately retract the imposition of the sanction, which as you must know, will irreparably harm Empower," the letter said. "Absent this, Empower will be required to take all steps necessary to mitigate this harm, and as you know, DHS is not immune from suit for ultra vires acts such as this."

An ultra vires act is one taken beyond an entity's legal authority.

Ney said the evidence presented in court documents is "historical in nature to provide context of Beacon's acrimony and uncooperativeness, but not included in the claims for relief, which can be summarized simply: turn over the phones, email domains and website."

Morris, the Empower CEO, called the review process with the Department of Human Services "frustrating."

"While the process has been frustrating at several points and Empower takes issue with some of the positions and actions taken by DHS, it is my hope that DHS is being objective and fair in its evaluation of Empower and its ability to transition," Morris said in an email to the Democrat Gazette. "The agency's final determination will likely speak to this point."

Arkansas Department of Human Services spokesperson Amy Webb said in an email that the agency "sets clear requirements for all PASSEs in the program to protect our members, and those must be met for a company to continue serving our clients."

"Because Empower is going through an ownership transition, it must show us that it can meet our clearly outlined expectations," Webb said. "We continue to monitor the situation closely and will provide more information to our clients as it becomes available."

That approval is one requirement of the "readiness review" needed to prove that "Empower will continue with seamless operations following the transition from Beacon as an owner and that Empower is approved to offer a PASSE plan for calendar year 2022," Department of Human Services documents said.

"Empower maintains our members as #1 priority in everything we do. We have every intention of continuing well into the future and providing the highest quality services to them and the providers that care for them," Morris said.