Father, son, neighbor get life for jogger’s death; judge to decide on parole possibility by Compiled by Democrat-Gazette Staff From Wire Reports | November 25, 2021 at 4:06 a.m. 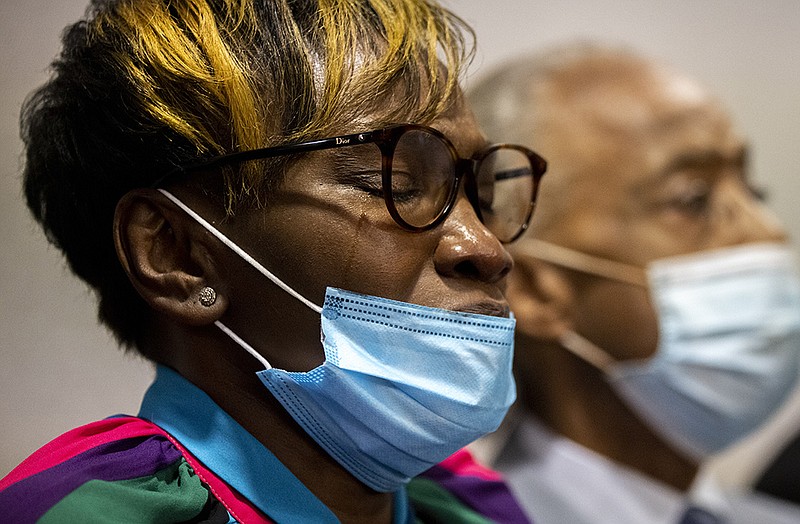 BRUNSWICK, Ga. -- Three men were convicted of murder Wednesday in the death of Ahmaud Arbery, the Black man who was running empty-handed through a Georgia subdivision when the white strangers chased him, trapped him on a quiet street and shot him.

The February 2020 slaying drew limited attention at first. But when video of the shooting leaked online, Arbery's death quickly became another example in the nation's reckoning with the way Black people are treated in their everyday lives.

Now the men all face a mandatory sentence of life in prison. Superior Court Judge Timothy Walmsley will decide whether their sentences are served with or without the possibility of parole.

As the first of 23 guilty verdicts were read, Arbery's father had to leave the courtroom after leaping up and shouting. At the reading of the last criminal count, Arbery's mother dropped her head and quietly pumped her fists.

"He didn't do nothing but run and dream," Marcus Arbery Sr. said of his son. At the time of his death, the 25-year-old was enrolled at a technical college and was planning to become an electrician like his uncles.

Outside the courthouse, dozens of Black supporters hugged and cried.

"Let the word go forth all over the world, that a jury of 11 whites and one Black stood up in the Deep South and said Black lives matter," the Rev. Al Sharpton said as he left the courtroom clutching Arbery's mother, Wanda Cooper-Jones.

[Video not showing up above? Click here to watch » arkansasonline.com/1125arbery/]

"Brunswick, Ga., will go down in history as the place where criminal justice took a different turn," Sharpton said.

Arbery's family once fought for legal consequences of any kind.

"Back in 2020, I never thought this day would come," Cooper-Jones said. Now, she said, her son could rest in peace.

The uproar over Arbery's killing eventually spurred changes to Georgia law and a criminal indictment for the first prosecutor to touch the case.

Former Brunswick Judicial Circuit District Attorney Jackie Johnson quickly recused herself because Greg McMichael, a former police officer, had recently retired from her office. Johnson, who was voted out of office, was indicted in September on allegations that she showed favor to Greg McMichael and obstructed police by telling them not to arrest Travis McMichael.

A second prosecutor, George Barnhill, had advised police against arrests a day after the shooting. Barnhill, who remains in office, defended the McMichaels and Bryan even as he eventually recused himself as well, asserting that Arbery was caught "burglarizing" and had attacked Travis McMichael.

After the May 2020 leak of the video -- which had been in police possession for months -- and the public outcry, the Georgia Bureau of Investigation took over the case and announced arrests.

"This is a very consequential day, not just for Ahmaud Arbery but for families all over America," said Ben Crump, a civil-rights lawyer who represents the family. "We have to show that America must be better than what we saw in that video."

The leaked video thrust Arbery's case into the national spotlight, just weeks before the murder of George Floyd by a white police officer in Minneapolis ignited mass protests against police brutality and racism. Arbery's killing became a rallying point for the Black Lives Matter movement, as protesters said Arbery was racially profiled while jogging and accused authorities of brushing his death aside.

That national conversation hung over the trial that stretched more than five weeks as lawyers fought over the courtroom presence of Black civil-rights leaders and a nearly all-White jury.

The McMichaels grabbed guns and jumped in a pickup to pursue Arbery after seeing him running outside the Georgia port city of Brunswick. Bryan joined the pursuit in his own pickup and recorded cellphone video of Travis McMichael fatally shooting Arbery.

[Video not showing up above? Click here to watch » arkansasonline.com/1125sharpton/]

The father and son told police they suspected Arbery was a fleeing burglar. But the prosecution argued that the men provoked the fatal confrontation and that there was no evidence Arbery committed any crime.

"We commend the courage and bravery of this jury to say that what happened on Feb. 23, 2020, to Ahmaud Arbery -- the hunting and killing of Ahmaud Arbery -- it was not only morally wrong but legally wrong, and we are thankful for that," said Latonia Hines, Cobb County executive assistant district attorney.

Prosecutor Linda Dunikoski added: "The jury system works in this country. And when you present the truth to people and they see it, they will do the right thing."

"This isn't the Wild West," she had told jurors, saying the accused jumped to assumptions about a "Black man running down the street."

Travis McMichael, 35, stood for the verdict, his lawyer's arm around his shoulder. At one point, he lowered his head to his chest. After the verdicts were read, as he stood to leave, he mouthed "Love you" to his mother in the courtroom gallery.

All three defendants were also found guilty of aggravated assault, false imprisonment and attempt to falsely imprison. Bryan and the elder McMichael were acquitted of malice murder.

Speaking outside the courthouse, attorney Crump repeatedly said that "the spirit of Ahmaud defeated the lynch mob."

Arbery's mother thanked the crowd gathered for the verdict. "It's been a long fight," she said. "It's been a hard fight. But God is good."

Travis McMichaels' attorneys said both he and his father feel they did the right thing, and that they believed the video would help their case. But they also said the McMichaels regret that Arbery got killed.

They planned to appeal.

Bryan's attorney, Kevin Gough, said his team was "disappointed with the verdict, but we respect it." He planned to file new legal motions after Thanksgiving.

The judge did not immediately schedule a sentencing date, saying he wanted to give both sides time to prepare.

In a statement, President Joe Biden, who once compared the killing to a lynching, said Arbery's killing was a "devastating reminder" of how much more work the country has to do in the fight for racial justice.

"While the guilty verdicts reflect our justice system doing its job, that alone is not enough. Instead, we must recommit ourselves to building a future of unity and shared strength, where no one fears violence because of the color of their skin," Biden said.

Georgia Gov. Brian Kemp said in a statement that Arbery "was the victim of a vigilantism that has no place in Georgia."

Sen. Raphael Warnock, D-Ga., called the verdict accountability but not "true justice," saying that real justice "looks like a Black man not having to worry about being harmed -- or killed -- while on a jog."

Though prosecutors did not argue that racism motivated the killing, federal authorities have charged them with hate crimes, alleging that they chased and killed Arbery because he was Black. That case is scheduled to go to trial in February.

The disproportionately white jury received the case around midday Tuesday.

Soon after returning to court Wednesday morning, the jury sent a note to the judge asking to view two versions of the shooting video -- the original and one that investigators enhanced to reduce shadows -- three times apiece.

Jurors returned to the courtroom to see the videos and listen again to the 911 call that one of the defendants made from the bed of a pickup about 30 seconds before the shooting.

Greg McMichael tells an operator on the call: "I'm out here in Satilla Shores. There's a Black male running down the street."

He then starts shouting, apparently as Arbery is running toward the McMichaels' idling truck with Bryan's truck coming up behind him: "Stop right there! Damn it, stop! Travis!" Gunshots can be heard a few second later.

Defense attorneys contend the McMichaels were attempting a legal citizen's arrest when they set off after Arbery, seeking to detain and question him after he was seen running from a nearby home under construction.

Travis McMichael testified that he shot Arbery in self-defense. He said Arbery turned and attacked with his fists while running past the truck where McMichael stood with his shotgun.

Shaun Seals, a 32-year-old lifelong Brunswick resident, rushed to the courthouse to join the crowd cheering the verdict.

"We just came out to witness history," said Seals, pushing his 10-month-old daughter in a stroller.

Seals, who is Black, called the convictions a victory not just for his community but for the nation.

"It's not going to heal most of the wounds" from a long history of inequality, he said. "But it's a start and shows people are trying."

"We feel like justice was served and it was a relief to know the system actually worked in this case and they didn't find a loophole," said Shawn Golden, 48, who is Black and came to the courthouse Wednesday with his 10-year-old son.

"Bringing him face-to-face to what is going on around us, this is special and something he will remember for the rest of his life," Golden said.

Ruby Arbery, Ahmaud's aunt, said she "felt something lift off her."

"All the pain, all the hurt, it lifted because I knew we got justice," said Arbery. "We finally got justice for my nephew."

Information for this article was contributed by Russ Bynum of The Associated Press; and by Tim Craig, Hannah Knowles, Eugene Robinson and Felicia Sonmez of The Washington Post. 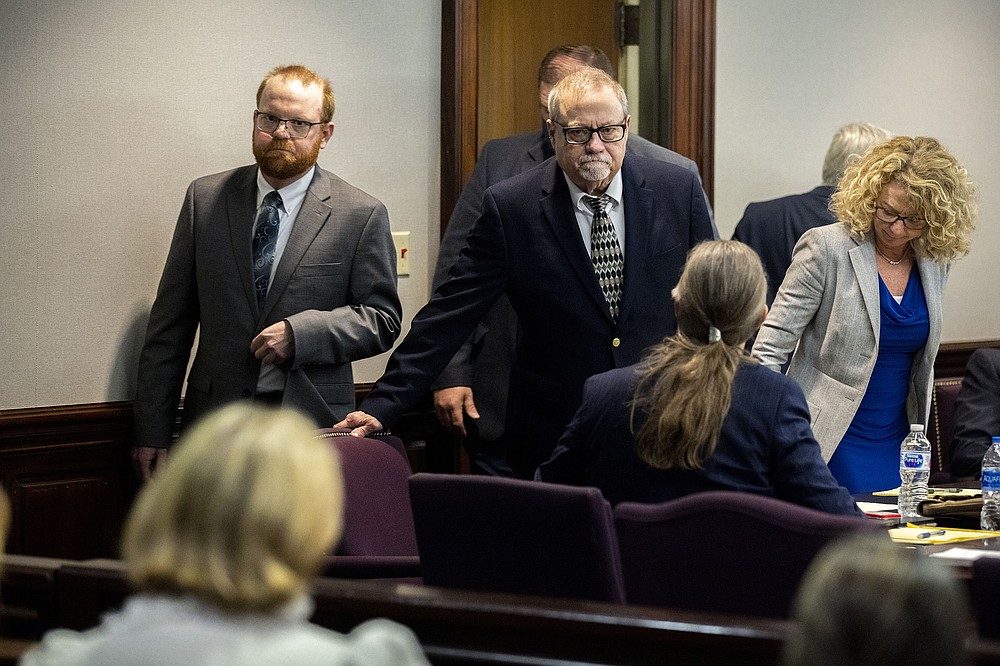 Travis McMichael (left) and his father, Greg McMichael, look at family members as they walk into the courtroom for the reading of the verdicts Wednesday in Brunswick, Ga. (AP/Stephen B. Morton) 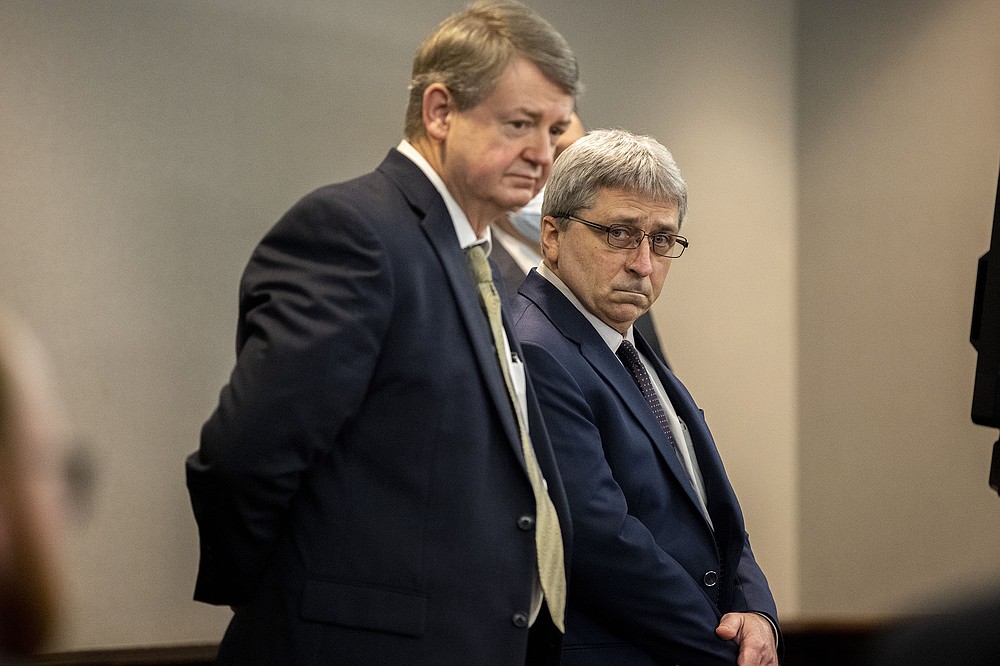 William “Roddie” Bryan (right) stands next to his attorney Kevin Gough after he was found guilty, along with the McMichaels. (AP/Stephen B. Morton)