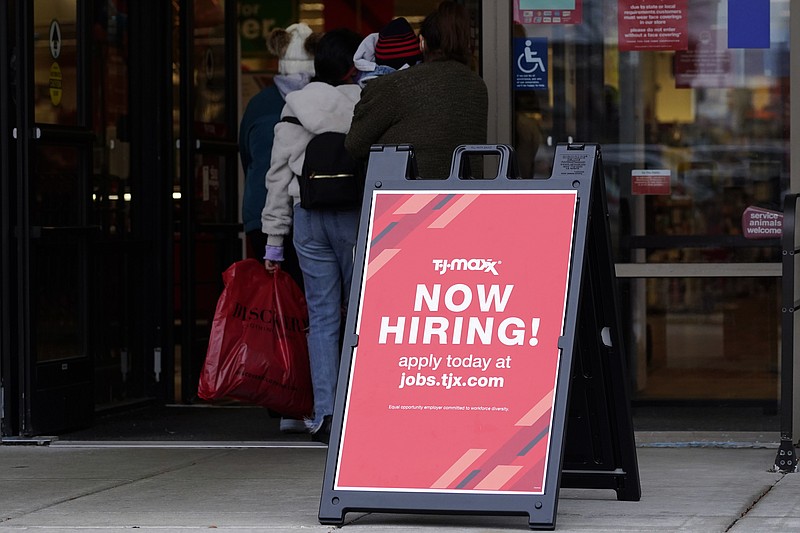 Hiring sign is displayed outside of a retail store in Vernon Hills, Ill., Saturday, Nov. 13, 2021. The number of Americans applying for unemployment benefits plummeted last week to the lowest level in more than half a century, another sign that the U.S. job market is rebounding rapidly from last year's coronavirus recession. (AP Photo/Nam Y. Huh)

WASHINGTON -- The number of Americans applying for unemployment benefits plummeted last week to the lowest level in more than half a century, another sign that the U.S. job market is rebounding rapidly from last year's coronavirus recession.

Jobless claims dropped by 71,000 to 199,000, the lowest since mid-November 1969, the Labor Department reported Wednesday. But seasonal adjustments around the Thanksgiving holiday contributed significantly to the bigger-than-expected drop. Unadjusted, claims actually ticked up by more than 18,000 to nearly 259,000.

The four-week average of claims, which smooths out weekly ups and downs, also dropped -- by 21,000 to just over 252,000, the lowest since mid-March 2020 when the pandemic slammed the economy.

This marks the eighth straight week of declines and a pivotal shift. Since topping 900,000 in early January, the applications have fallen steadily and have now fallen below their pre-pandemic level of around 220,000 a week. Claims for jobless aid are a proxy for layoffs.

In total, 2 million Americans were collecting traditional unemployment checks the week that ended Nov. 13, down slightly from the week before.

[Video not showing up above? Click here to watch » arkansasonline.com/1125jobless/]

It's a stark contrast with this time last year, when around 700,000 claims were filed. It's also a reflection of a tight labor market that has companies scrambling to retain and expand their workforces, and the number stands out in an economic landscape racked by the highest inflation in decades and a protracted supply chain crisis.

"It is fair to say we didn't see that coming," Mark Hamrick, senior economic analyst at Bankrate, said Wednesday in comments emailed to The Washington Post. "Getting new claims below the 200,000 level for the first time since the pandemic began is truly significant, portraying further improvement."

President Joe Biden on Wednesday touted the report as an example of the "historic economic progress" being made by his administration. But he added, "We have more work to do before our economy is back to normal, including addressing price increases that hurt Americans' pocketbooks and undermine gains in wages and disposable income."

Until Sept. 6, the federal government had supplemented state unemployment insurance programs by paying an extra payment of $300 a week and extending benefits to gig workers and to those who were out of work for six months or more. Including the federal programs, the number of Americans receiving some form of jobless aid peaked at more than 33 million in June 2020.

The job market has staged a remarkable comeback since the spring of 2020 when the coronavirus pandemic forced businesses to close or cut hours and kept many Americans at home as a health precaution. In March and April last year, employers slashed more than 22 million jobs.

But government relief checks, super-low interest rates and the rollout of vaccines combined to give consumers the confidence and financial wherewithal to start spending again. Employers, scrambling to meet an unexpected surge in demand, have made 18 million new hires since April 2020 and are expected to add another 575,000 this month. Still, the United States remains 4 million short of the jobs it had in February 2020.

The Labor Department's monthly jobs report, which will be released next week, is expected to shed more light on the complex dynamics of the labor market. While jobless claims have ticked lower in recent weeks, a record 4.4 million Americans, or roughly 3% of the labor force, quit their jobs in September, according to data from the Bureau of Labor Statistics.

Hiring strengthened in October, with the nation adding 531,000 jobs, and the unemployment rate dropped from 4.8% to 4.6%. Although the rate remains a far cry from the 3.5% recorded in February 2020, it represents a significant improvement over the course of 2021. In January, the unemployment rate stood at 6.3%.

Even so, millions of Americans are still choosing to sit on the sidelines, frustrating employers who are desperate to fill a near-record number of positions. Child care remains a serious issue for working parents, especially as covid cases pick up again in many states and disrupt in-person learning.

Companies now complain that they can't find workers to fill job openings, a near-record 10.4 million in September. Workers, finding themselves with bargaining clout for the first time in decades, are becoming choosier about jobs; a record 4.4 million quit in September, a sign they have confidence in their ability to find something better.

The surprisingly steep drop in jobless claims had little effect on Wall Street. Investors were more focused on disappointing earning reports from retailers, which are struggling with supply chain issues, inflation and staffing.

If claims are indeed sustained at around pre-pandemic levels, it would likely increase the chances that Federal Reserve officials accelerate their tapering of bond purchases and contemplate raising interest rates soon after that buying finishes in 2022. The data follow reports showing the fastest inflation in three decades and a pickup in job gains in October.

Information for this article was contributed by by Paul Wiseman of The Associated Press, by Taylor Telford and Aaron Gregg of The Washington Post and by Molly Smith of Bloomberg News (TNS).