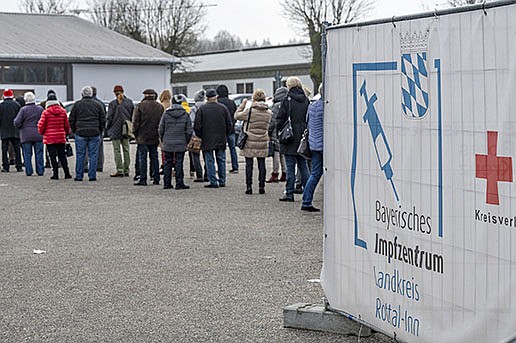 A line stretches in front of a covid-19 vaccination center Wednesday in Eggenfelden, Germany. Doctors and virologists have been warning for months that Germany faces a surge in new cases. (AP/dpa/Armin Weigel)

BRUSSELS -- A spike in covid-19 cases in recent weeks is threatening the European Union's recovery from the deep economic slump caused by last year's onset of the pandemic, the bloc's economy chief said Wednesday.

And medical experts warned that the public health situation could get much worse.

Only two weeks ago, the EU executive raised the growth forecast for an economy bouncing back from the worst of the pandemic. But EU Economy Commissioner Paolo Gentiloni said Wednesday that the picture was now in doubt again amid rising infections and with restrictions being reintroduced in a growing number of member states.

The fear is that the fall forecast for 5% growth this year in the 19-nation eurozone could still be hurt by the end-of-year virus crisis.

"Our only message is: Take the situation very seriously," Gentiloni said, "but without thinking that the economic impact will be the same one as one year ago."

Medical experts warned of more hardship ahead, and called for urgent measures that could affect crucial sectors like the restaurant, bar and tourism industries.

[Video not showing up above? Click here to watch » arkansasonline.com/1125germany/]

The European Center for Disease Prevention and Control said in a report Wednesday that the burden from the highly contagious delta variant "is expected to be very high in December and January," unless drastic government action in taken and vaccinations tick further upward.

It all goes against initial expectations for the holiday season, when it was thought that Europeans unburdened by covid-19 restrictions would dip into their forced savings of the past year and spend, giving the economy a major shot in the arm.

As Germany inches toward the mark of 100,000 deaths from covid-19, the country's leader-in-waiting announced plans Wednesday to create an expert team at the heart of the next government to provide daily scientific advice on tackling the pandemic.

Olaf Scholz of the center-left Social Democrats announced the measure, along with the creation of a standing emergency committee, at the start of a news conference laying out the deal his party and two others have agreed to form a new government.

"Sadly, the coronavirus still hasn't been beaten," Scholz said. "Every day we see new records as far as the number of infections are concerned."

German officials -- from outgoing Chancellor Angela Merkel to state governors and the three parties now poised for power -- have been criticized for failing to take decisive steps to flatten the curve of infections during the transition period since September's national election.

Doctors and virologists have been warning for months that Germany faces a surge in new cases that could overwhelm its health care system, even as senior politicians dangled the prospect of further lifting pandemic restrictions.

"Nobody had the guts to take the lead and announce unpopular measures," said Uwe Janssens, who heads the intensive-care department at St. Antonius hospital in Eschweiler.

"This lack of leadership is the reason we are here now," he said.

Doctors are bracing for an influx of patients as confirmed cases hit fresh daily highs that experts say is being fueled by vaccine skeptics.

Resistance to getting the shot -- including the one developed by German company BioNTech together with U.S. partner Pfizer -- remains strong among a sizeable minority of the country. Vaccination rates have stalled at 68% of the population, far short of the 75% or higher that the government had aimed for.

"We've increasingly got younger people in intensive care," Janssens said. "The amount of time they're treated is significantly longer and it blocks intensive-care beds for a longer period."

Older people who got vaccinated early in 2021 are also seeing their immunity wear off, making them vulnerable to serious illness again, he said. Echoing problems seen during the initial vaccine rollout, authorities have struggled to meet demand for boosters even as they tried to encourage holdouts to get their first shot.

Some German politicians are suggesting it's time to consider a vaccine mandate, either for specific professions or for the population as a whole. Austria took that step last week, announcing that shots will become compulsory for all starting in February after seeing a similar reluctance to get vaccinated fuel fresh outbreaks and hospitalizations.

Merkel said in June that she didn't favor such a measure.

Scholz had initially refused to be drawn out on whether he would back compulsory shots. But speaking alongside the leaders of the environmentalist Greens and the pro-business Free Democrats, Scholz said Wednesday that the new government will require staff in care homes to get vaccinated. And he said an expansion of the measure could be considered, without elaborating.

A fund of 1 billion euros, or $1.12 billion, will also be established to provide bonus payments to carers in hospitals and nursing homes, he said.

The three parties set to govern recently used their parliamentary majority to pass a law that replaces the existing legal foundations for pandemic restrictions with narrower measures. These include a requirement for workers to provide their employers with proof of vaccination, recovery or a negative test. The change was criticized by Merkel's center-right Union bloc as making it harder for Germany's 16 governors to impose hard lockdowns.

Merkel's spokesman acknowledged Wednesday that "there are many experts who doubt that what's been decided so far, as sensible and important as it is, will be enough to slow the wave."

Meanwhile, health authorities in five eastern states and Bavaria have activated an emergency system to coordinate the distribution of 80 seriously ill patients to other parts of the country. Earlier this month, two patients were taken from southern Germany to Italy for treatment, a significant change from last year, when Italian patients were being sent to German hospitals.

Germany boasted almost four times as many intensive-care beds per capita as Italy had then, a factor that experts say was key to the low German death toll at the time.

Since January, Germany has had to cut its ICU capacity by 4,000 beds because of lack of staff, many of whom have quit because of the pressure they endured earlier in the pandemic.

Information for this article was contributed by Raf Casert, Daniel Niemann and Frank Jordans of The Associated Press.