The world in brief: 52 people die in Siberian mine blast 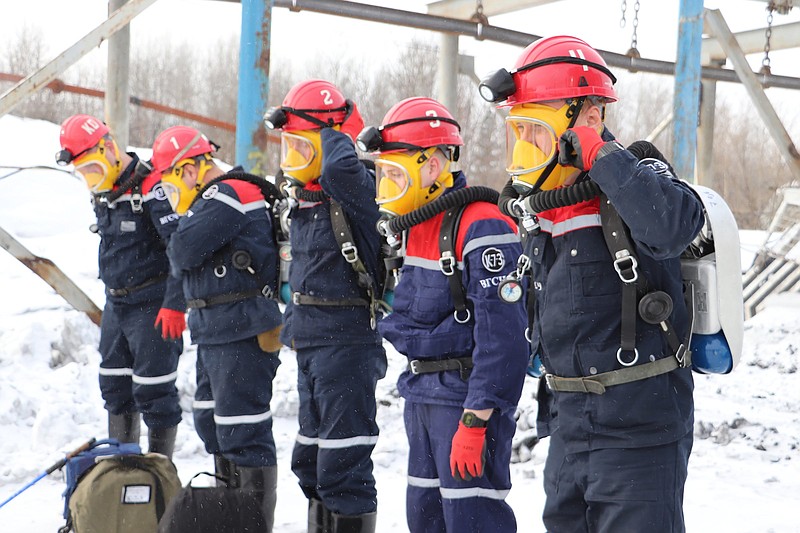 Rescuers prepare to work on a coal mine fire Thursday near the Siberian city of Kemerovo, Russia. (AP/Russian Ministry for Emergency Situations)

52 people die in Siberian mine blast

MOSCOW -- An explosion in a Siberian coal mine Thursday left 52 miners and rescuers dead about 820 feet underground, Russian officials said.

Hours after a methane gas explosion and fire filled the mine with toxic fumes, rescuers found 14 bodies but then were forced to halt the search for 38 others because of a buildup of methane and carbon monoxide gas from the fire. Another 239 people were rescued.

The Interfax news agency cited a representative of the regional administration who also put the death toll from Thursday's accident at 52, saying they died of carbon monoxide poisoning.

A total of 285 people were in the Listvyazhnaya mine early Thursday when the blast sent smoke that quickly filled the mine through the ventilation system. Rescuers led to the surface 239 miners, 49 of whom were injured, and found 11 bodies.

Later in the day, six rescuers also died while searching for others trapped in a remote section of the mine, the news reports said.

President Vladimir Putin extended his condolences to the families of the dead and ordered the government to offer all necessary assistance to those injured.

Swedish lawmakers to vote on premier

COPENHAGEN, Denmark -- Swedish lawmakers will vote next week on whether Magdalena Andersson, who briefly became the country's first female prime minister before resigning after a budget defeat, can form a minority government, the parliament speaker said Thursday.

Andersson served as prime minister for seven hours before stepping down Wednesday after the Greens left her two-party coalition. Their move followed the rejection of her government's budget proposal -- in favor of one presented by opposition parties, including the right-wing populist Sweden Democrats, which is rooted in a neo-Nazi movement.

Andersson, leader of the Social Democratic party, decided then that it was best to step down from the post. She informed Parliament Speaker Andreas Norlen that she was still interested in leading a Social Democratic single-party government.

He was expected to formally nominate Andersson again later Thursday and a vote in the 349-seat Riksdag was set for Monday.

Norlen who oversees the government-building process, said Thursday that it could have been avoided "if I had received a message from the Green Party" that they would withdraw from the coalition before the vote that made Andersson prime minister.

ROME -- National Geographic magazine's famed green-eyed "Afghan Girl" has arrived in Italy as part of the West's evacuation of Afghans after the Taliban takeover of the country, the Italian government said Thursday.

The office of Premier Mario Draghi said Italy organized the evacuation of Sharbat Gulla after she asked to be helped to leave the country. The Italian government will now help to get her integrated into life in Italy, the statement said.

Gulla gained international fame in 1984 as an Afghan refugee girl, after war photographer Steve McCurry's photograph of her, with piercing green eyes, was published on the cover of National Geographic.

In a statement announcing Gulla's arrival in Rome, Draghi's office said her photograph had come to "symbolize the vicissitudes and conflict of the chapter in history that Afghanistan and its people were going through at the time."

Italy organized her travel to Italy "as part of the wider evacuation program in place for Afghan citizens and the government's plan for their reception and integration," the statement said.

BUCHAREST, Romania -- Romanian President Klaus Iohannis swore in Thursday a new coalition government led by a Liberal former army general and declared an end to a monthslong political crisis that had gripped the Eastern European nation.

At the swearing in ceremony, Iohannis said that the "political crisis is over" but other problems still face the country.

The country's 20 ministries will be shared among the parties. Together, the three parties control about two-thirds of the 466-seat legislature.

Part of the deal between the new coalition partners, which included social spending increases requested by the Social Democrats, is that the prime ministerial role is rotated every 18 months. Ciuca will first hold the position after which a Social Democrat premier will replace him.

Social Democrat Party leader Marcel Ciolacu acknowledged on Thursday rising energy prices and noted that Romania has been hard-hit by the pandemic. 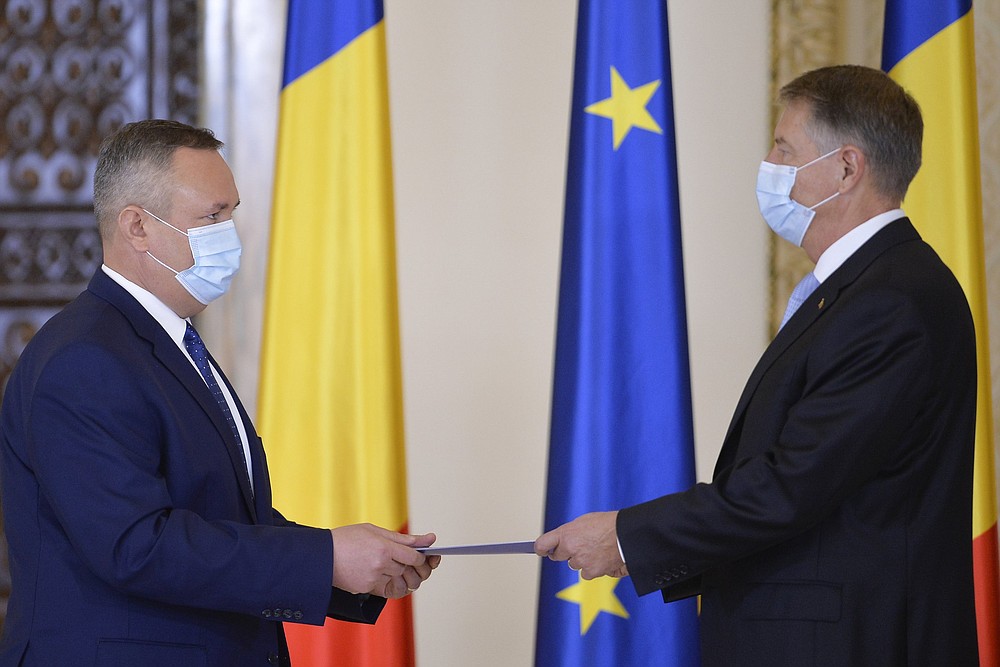 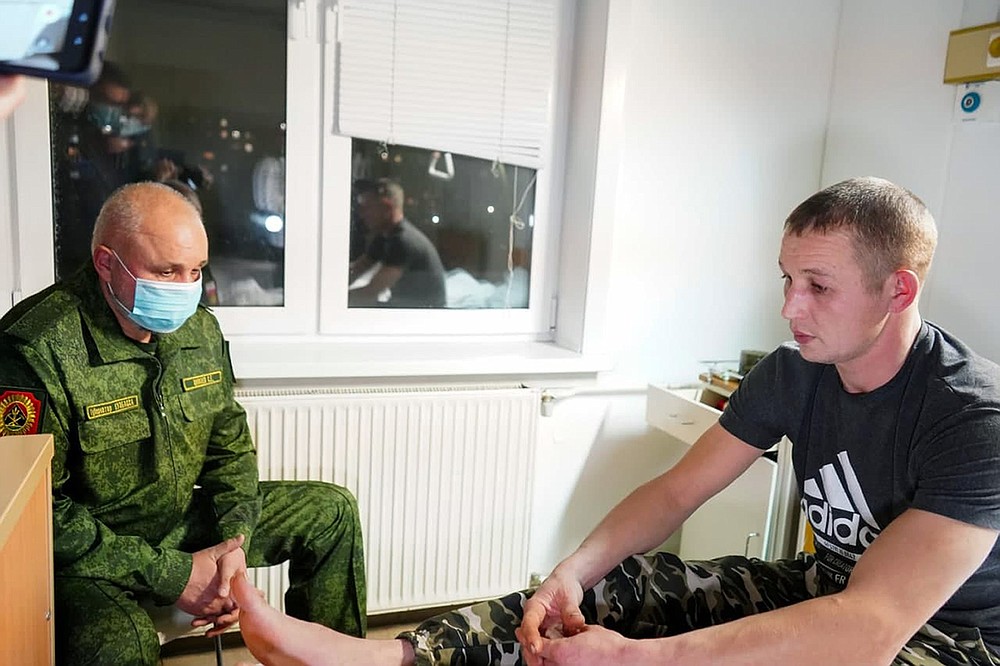 In this photo provided by the Governor of Kemerovo Region Press Office, Kemerovo Governor Sergei Tsivilyov, left, visits a wounded miner after the accident at the Listvyazhnaya coal mine at the Kuzbass Clinical Center for the Protection of Miners&#x27; Health in Leninsk-Kuznetsky about 100 km (62 mies) of the Siberian city of Kemerovo, about 3,000 kilometres (1,900 miles) east of Moscow, Russia, Thursday, Nov. 25, 2021. At least 14 people have died in a fire at a coal mine in Russia&#x27;s Siberia that also has left 35 others trapped and feared dead. Nearly 50 other miners were injured. (Governor of Kemerovo region press office photo via AP)