Arkansas pounds Mizzou after halftime, finishes with most regular-season wins in 10 years 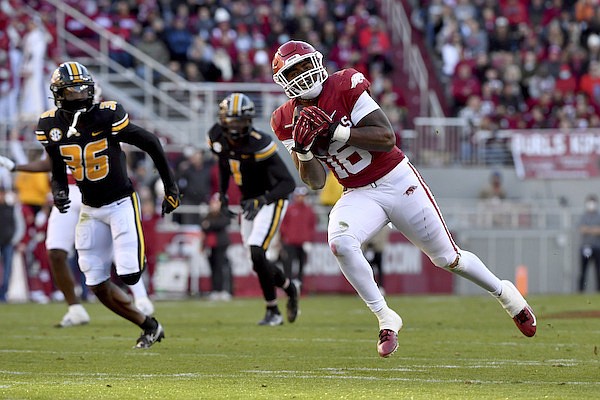 Arkansas receiver Treylon Burks (16) makes a catch in front of Missouri defensive back DJ Jackson (36) during the first half of an NCAA college football game Friday, Nov. 26, 2021, in Fayetteville. (AP Photo/Michael Woods)

The No. 25 Razorbacks defeated Missouri 34-17 to win the Battle Line Trophy for the first time since 2015. Like when they won trophy games over Texas A&M and LSU earlier this season, the Hogs broke a long losing streak — five games — against the Tigers.

Arkansas holds all three rivalry trophies for the first time. The Razorbacks had lost 15 consecutive trophy games entering the season, dating to the 2015 win over Mizzou.

“We don’t have a guy on our team that won any of them. Ever. Not one,” Arkansas coach Sam Pittman said. “To have those three trophies in there is big. It’s a great tribute to those kids and to my assistant coaches.”

Arkansas will learn Dec. 5 of its bowl destination, which is likely be in one of the SEC’s group of six bowls — the Outback, Gator, Liberty, Music City, Texas or Duke’s Mayo.

The Razorbacks gained 425 yards against one of the SEC’s worst defenses and outscored the Tigers 24-11 after halftime. Mizzou (6-6, 3-5) entered the game ranked 13th in the league in total defense and scoring defense.

Arkansas had chunk plays of at least 32 yards on its six scoring drives, including a 52-yard touchdown pass from KJ Jefferson to Treylon Burks to put the Razorbacks ahead 24-6 with 9:48 remaining in the third quarter.

Burks, a coveted NFL draft prospect who was potentially playing his final college home game, finished with seven receptions for 129 yards. He became the first Arkansas receiver with six 100-yard games in a single season.

Jefferson completed 15 of 19 passes for 262 yards and 1 touchdown, and hit long pass plays on all of Arkansas’ touchdown drives. His 49-yard scramble to the Mizzou 11 also set up Cam Little’s 36-yard field goal on the Razorbacks’ first drive to put them ahead 3-0.

A 10-play drive that finished with a 23-yard field goal by Little to put Arkansas ahead 27-9 early in the fourth quarter included a 39-yard pass from Jefferson to Ketron Jackson.

"He's a big-time quarterback and he did what he needed to do for his football team tonight," Missouri coach Eli Drinkwitz said.

Montaric Brown intercepted Mizzou quarterback Connor Bazelak on the Tigers’ next offensive snap, and one play later Warren rushed 32 yards to the Mizzou 15 on an end around. The Razorbacks extended their lead to 34-9 when Sanders scored from 7 yards after he took a pitch from Burks on an option play.

Kicker Harrison Mevis accounted for all of Mizzou’s points before Tyler Badie scored on a 5-yard touchdown run with 1:25 remaining. Mevis kicked field goals from 46 and 49 yards in the second quarter, and from 41 yards to pull the Tigers within 24-9 late in the third.

Badie, a Doak Walker Award finalist as the nation’s best running back, accounted for the majority of Mizzou’s 316 yards. Badie rushed 41 times for 219 yards — his fifth 200-yard game this season.

Arkansas finished the season with a 6-1 home record, including a 5-1 record in Fayetteville.

Information from The Associated Press was used in this article