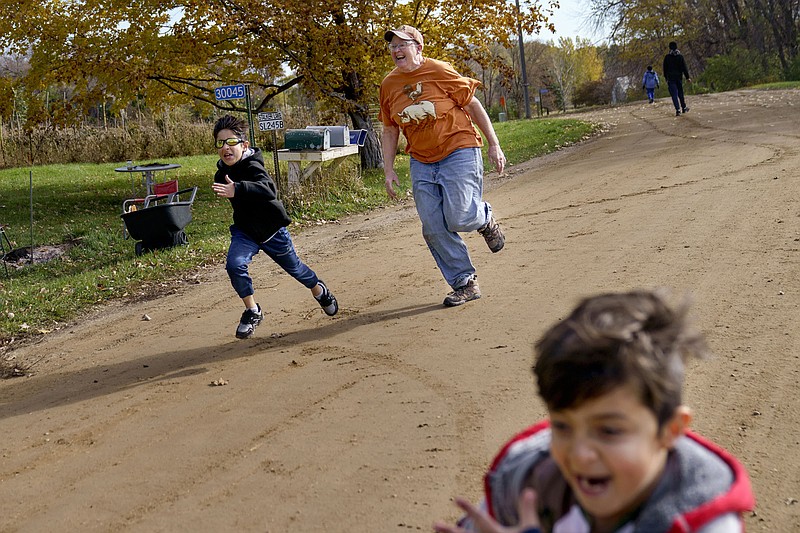 Caroline Clarin races 9-year-old Sala Patan (left), and his brother, Ali, 7, during a visit to her home in Dalton, Minn., with their father, Ihsanullah Patan, a horticulturist who Clarin helped leave Afghanistan with his family. (AP/David Goldman)

FERGUS FALLS, Minn. -- The U.S. soldiers called them "Caroline's guys." They transformed farms in a war zone -- risking their lives for the program she built, sharing her belief that something as simple as apple trees could change the world.

In the process, the 12 agricultural specialists, all traditional Afghan men, formed a deep, unexpected bond with their boss, an American woman who worked as a U.S. Department of Agriculture adviser in the region for two years.

Now, Caroline Clarin is trying to save them one by one, doing it all from the 1910 Minnesota farmhouse she shares with her wife, drawing from retirement funds to help a group of men who share her love of farming.

Clarin has helped get five of her former employees and their families into the U.S. since 2017, while her wife has helped them rebuild their lives in America.

Since the Taliban seized power in August, texts from those remaining have grown more urgent and Clarin says she can "feel the panic increasing" as winter approaches and food shortages grow.

Clarin has stepped up her efforts, working endless hours, diligently tracking their visa applications. She calls senators to apply pressure so they don't languish like the thousands of other visa applications in the backlogged system for Afghans who supported the U.S. government during the long war.

She's driven by fear her team will be killed by the Taliban, though the new government has promised not to retaliate against Afghans who helped the U.S.. She also wants to give them a future.

Since U.S. forces withdrew, more than 70,000 Afghans have come to the United States and thousands are languishing at U.S. military bases as resettlement agencies struggle to keep up.

Clarin knows she cannot save everyone, but she's determined to help those she can.

After she left Afghanistan in 2011, she was consumed by anger over her program being gutted as the U.S. government changed its priorities.

"When I got on the plane, it was like leaving my family on the helipad," she said. "I felt like I deserted them."

The most recent of her friends to escape was Ihsanullah Patan, a horticulturist who waited seven years for a special immigrant visa. After he texted her that two of his close friends had just been killed, Clarin withdrew $6,000 from a retirement fund to get him and his family on a commercial flight to Minnesota before the Taliban took control of the country this summer.

When Clarin picked them up at the airport in Minneapolis at midnight for the three-hour drive back to Fergus Falls, she was consumed with joy.

"It was like my son came home," she said.

Both Clarin and Patan speak passionately about farming, describing in detail how to get a good apple crop and ward off disease.

Clarin arranged for the U.S. military to take her team in convoys to remote areas to train farmers, empowering Afghans to teach each other skills. They lined canals to ensure clean water. They worked with farmers to plant trees and build stone barriers to control flooding. They distributed seeds to 1,200 families, who have since shared seeds with more people.

The program trained about 5,000 farmers in Paktika from 2009 to 2011. They provided growers hoop-houses, apple trees, pruning equipment and small grants. They taught farmers tangible solutions, including using buckets with drip lines to irrigate gardens and conserve water.

The Taliban tried to sabotage the trust they built with farmers, Clarin said. Once, an explosive blew up in a red bucket like the ones they used for irrigation.

Patan has stayed in contact with some of the farmers in Paktika and proudly shows photos on his iPhone of the tiny stems he distributed that are now trees several feet tall. One farmer texted him to say his harvest is feeding his family as millions of others in the country face severe hunger.

That offers some solace after seeing his homeland fall to the Taliban. It feels good he said to know his work left something lasting and that "the people can still benefit from it. We educated one generation and those fathers will tell it to their sons."

Patan misses his career back in Afghanistan. Most U.S. employers do not recognize degrees from Afghan universities, so he plans to return to school to earn a U.S. degree. For now, he is training to be a commercial truck driver, a field flush with opportunities: There were 21 job openings in the area when he started his classes this month.

He wants a local truck route to stay close to home, but it will still be challenging for his family. His wife, Sediqa, does not speak English, nor does she know how to read or write, and does not feel comfortable going out by herself.

She also does not drive.

When she started learning English online, she was at "ground zero," said her teacher, Sara Sundberg at Minnesota State Community and Technical College.

"When she came, she didn't know what to do with a pencil. We had to show her. She held it kind of like a Henna tube," said Sundberg, holding together her thumb and index finger tightly at the tip as if squeezing something.

Five months later, her handwriting is "meticulous," and her pronunciation is excellent, Sundberg said. She's even learning to say Minnesota with the long "oooo."

"I'm teaching her how to communicate with the community and I want people to understand her," Sundberg said. "Everything is brand new for her."

Sediqa is slowly gaining confidence in speaking with her teacher, but with others she is silent, smiling and staying back with her children.

Everything is new for their children, too. Patan's sons befriended a neighbor boy and jumped for the first time on a trampoline.

His oldest son, Maiwan, decorated his first pumpkin, while his two younger sons wore their traditional Afghan clothes because their teachers told them that on the Friday before Halloween the kids could "dress up," something that was lost in translation but went unnoticed as the other kids excitedly showed them their costumes.

They look forward to the weekends with their "aunties" at the farm.

On a warm October Saturday, Clarin jogged next to 12-year-old Maiwan driving a small tractor as Ali and his 9-year-old brother, Sala, dug in the dirt for worms with their cousins, giggling and chatting incessantly in Pashto.

"They are kinda free," Patan says of his kids now, recalling how bomb blasts in Kabul caused them to miss school more than once.

They still carry the trauma. When fireworks were shot off for Fourth of July this summer, Patan called his cousin in a panic and asked if Fergus Falls was being bombed.

Clarin has vowed to get all her guys out.

Since the Taliban took control of the country in August, she has been starting most days around 3 a.m. when she quietly makes her way to her basement office, hours before she heads to her job in Fergus Falls as a U.S. Department of Agriculture wetlands restoration engineer.

Stacks of passport photos, recommendation letters, visa applications and other paperwork cover the tables, her desk and the top of a freezer. Across the hall, Clarin's wife, Sheril Raymond, has prepared a guest room for the next Afghan family they get out.

Besides the guys from her program still in Afghanistan, she is aiding other Afghans, including several women.

"Why US government did this to us? Why did they leave us behind?," one texts. Desperate pleas for help from more Afghans keep popping up in her phone as word spreads of her efforts.

"My sister said, 'You got your own little Underground Railroad in the basement,'" Clarin said.

So far, the couple has spent just under $10,000 since May. That includes the airfare for the Patan family, a contribution toward the family's used minivan, and fees for five applications for humanitarian parole for families still in Afghanistan.

Raymond keeps the tally in a notebook.

"It does make me a little nervous because we've lived on the edge for so long," said 57-year-old Raymond, who sews her dresses, knits hats and bakes bread.

"So I work another year before retiring," Clarin, 55, answers with a shrug.

Two other Afghan families Clarin helped chose to settle in Austin, Texas, and San Diego, partly because in both places there are mosques, halal butcher shops and established Afghan communities. None of that exists in Fergus Falls.

They also wanted to avoid Minnesota's winters where wind chill temperatures a few years ago dropped to as low as 50 degrees below zero Fahrenheit, something Patan was shocked to learn.

But Patan knows there are drawbacks to cities. Another former member of Clarin's team who moved to California recently returned to Minnesota after complaining about the crime in Sacramento. The family now lives about an hour away but close to Fargo, where there is a mosque.

Patan, who speaks Dari and Pashto, translates documents for Clarin for the visa applications. He worries about his former colleagues, who remain his close friends.

"I hope that one day they can also come here and we will make a big Afghan kind-of-family over here," he said. "All of them want to come here to Fergus."

Raymond worries more than Clarin about money and she finds the government fee of $575 per application for humanitarian parole outrageous. But she also acknowledges they cannot step back now.

"When we bring in a family, they become our family," she said.