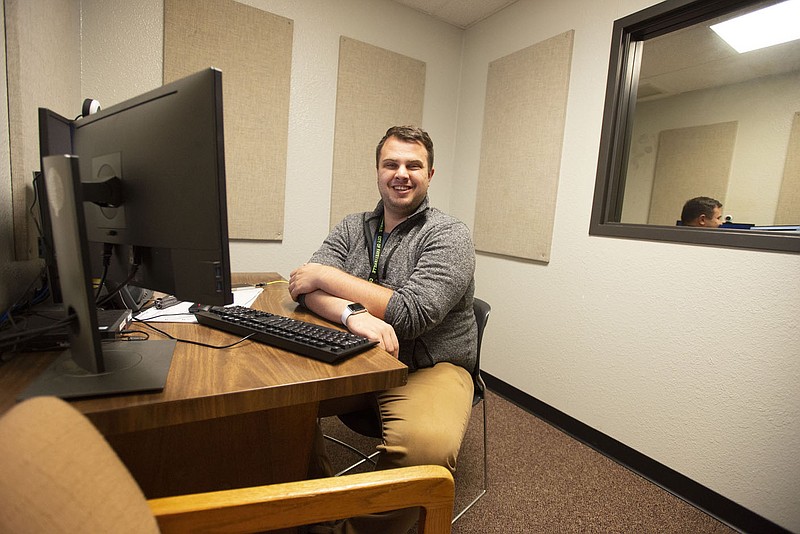 Steven Greathouse works Wednesday Nov. 24, 2021 at the Fayetteville police station. Greathouse is a MSW intern, working on the dedpartment&#x201a;&#xc4;&#xf4;s crisis intervention team. The city received a $250,000 federal grant over two years to hire two social workers and will use another $250,000 out of the regular city budget for two accompanying police officers to create a crisis intervention team. Visit nwaonline.com/211125Daily/ (NWA Democrat-Gazette/J.T. Wampler)

FAYETTEVILLE -- The city's Police Department wants officers to spend less time on calls unrelated to crime. To do that, it has enlisted the help of social workers.

The department has had a master's-level paid internship program through the University of Arkansas School of Social Work since January. Two graduate students have been working with officers on crisis intervention responses and follow-ups with residents.

The City Council on Nov. 16 accepted a $250,000 federal grant from the U.S. Department of Justice to hire two full-time social workers for two years. The city was one of 33 in the nation awarded the grant.

The council also approved a budget adjustment to spend another $250,000 on two new uniformed officers trained in crisis intervention who will accompany the social workers on calls.

By late spring or early summer, the city will have the two interns, two social workers, two trained officers and a supervisor to form a crisis intervention team.

Police Chief Mike Reynolds said the department has the fewest officers per capita among the largest cities in the state, and call volume is going up. There wasn't an officer available to respond to a high-priority call more than 500 times this year, he said.

In particular, violent crimes and property thefts and damage have become more frequent in the last few years, Reynolds said. That's why he asked the council to hire two new officers to accompany the social workers, he said.

"I don't have the capacity to deal with the demand that's being put on our workforce as it is," Reynolds said.

Demand from calls not criminal in nature has increased tenfold in the past 10 years, Reynolds said.

Responding patrol officers often haven't had the time to properly resolve issues on those calls, he said. In January 2020, Reynolds started asking his staff and city administrators about developing a social work program within the department.

Uniformed officers ensure a scene is safe before social workers intervene. The team provides a specialized response, said Lt. Tim Shepard, program supervisor. Social workers can take time with someone that a patrol officer may not have, he said. They're also more familiar with available services from nonprofit organizations and can follow up with a resident days or weeks after an initial call.

Police officers for decades have dealt with crisis calls as best they could but often found themselves at a loss for what to do, especially when it comes to connecting residents with resources, Shepard said. Having a specialized team not only relieves a patrol officer's workload, but helps keep residents who commit negligible offenses out of jail, he said.

"It takes a special person to deal with these types of issues day in and day out," Shepard said.

Steven Greathouse was the first intern brought into the program. He said he spent his first few months delving into paperwork, connecting residents with resources after a police encounter or trying to get charges amended or lifted after the fact. In summer, he started going out with officers and encountering residents in crisis directly.

Every situation is different, and Greathouse said he has encountered people from all walks of life. Officers trained in crisis intervention can gauge a person's mental health and determine if a situation is safe, but a social worker can go deeper, evaluating whether the person needs services for longer-term health and stability, he said.

Sometimes an officer finds a person experiencing a crisis may present a danger to others, and beds are unavailable elsewhere, so that person ends up going to jail. The team tries to find alternative solutions before resorting to jail time, Greathouse said. Even if the person goes to jail, Greathouse said he can follow up if the person needs help after being released.

"Situations like that are so unfortunate," he said. "The reality is we very well could have looked at some other options if there were services or beds available on like a Saturday night."

The Northwest Arkansas Crisis Stabilization Unit, operated by Washington County, closed in June after the nonprofit that staffed it, Ozark Guidance, cited cuts in state money. The center provided an alternative to jail for residents experiencing a crisis to voluntarily stay after an encounter with law enforcement. The University of Arkansas for Medical Sciences plans to reopen the 16-bed facility, although no date has been set.

More than half of 306 referrals to the unit came from the Fayetteville Police Department. It proved to be an invaluable resource, Greathouse said.

"I'm very excited UAMS is picking that back up because it's going to provide another option for individuals who are in crisis," he said.

Response to crisis intervention teams in police departments has been mixed nationally. Inadequate mental health services across the country usually means police are first to respond to someone in a crisis, according to a September 2020 story from National Public Radio. Crisis teams should remove police from responding unless absolutely necessary, but that rarely happens, experts say in the story.

Few cities have that kind of system. Eugene, Ore., has had a program for three decades called Crisis Assistance Helping Out On the Streets, or CAHOOTS, run by the city's White Bird Clinic but paid for through the city's Police Department. The clinic is helping other cities replicate such a program.

Some experts say embedding social workers within police departments doesn't fix a legacy of systemic racism in both fields, according to a March story from the Associated Press. Other experts say law enforcement is ingrained into American society, so alternative responses should act within that framework, the AP story says.

The crisis intervention model has proven effective in Fort Smith, according to a department spokesman. The city in April was awarded a $46,000 Comprehensive Opioid Abuse Program through the Arkansas Department of Finance and Administration. The grant pays for a social worker with the Guidance Center in Fort Smith to work 40 hours a week with the department alongside officers trained in crisis intervention, according to Aric Mitchell, department spokesman.

"The program has been so beneficial to us in the number of people we've been able to help that we plan to make it a permanent part of our budget moving forward, regardless of any available grant opportunities that may arise," he said.

"That tells us we're finding better ways to reach people with mental or behavioral health issues who are nonviolent," Mitchell said.

Fort Smith officers also practice pre-arrest diversion. If an officer believes someone is a good candidate for treatment, he will provide that person with the information to enter treatment, rather than go to jail. Fort Smith is home to the 16-bed Sebastian County Crisis Stabilization Unit, which the Guidance Center staffs.

Springdale's Police Department also has two interns with the University of Arkansas School of Social Work. The interns started in August and will stay on duty until the spring semester. The department also has several officers trained in crisis intervention, according to Lt. Jeff Taylor, spokesman.

Springdale's program is similar to Fayetteville's, said Whitney Payne, clinical assistant professor with the School of Social Work. School staff, interns and police have been meeting and talking about what has been working and what could be improved with the program, she said.

The Rogers Police Department has had a crisis intervention team with sworn officers for several years, said Keith Foster, department spokesman. No civilian social workers are assigned to the team, but the department is considering the opportunity, he said.

Bentonville has several police officers certified in crisis intervention, and every officer has some type of similar training, said Cpl. Adam Mcinnis, department spokesman. The agency has been in talks with Fayetteville about its program and will consider implementing a similar program, he said.

The School of Social Work will evaluate Fayetteville's full-time program once it starts. School staff will monitor client outcomes, the potential benefits to the Police Department and community response, said Mark Plassmeyer, assistant professor at the school.

"What we're really trying to do is make this evidence-based and try to avoid some of the struggles that other communities have faced and understand what calls are appropriate for the response team to go out on," he said.

The types of calls the team responds to now include disorderly conduct, public intoxication, possession of a controlled substance, trespassing, self-harm and mental illness issues. One thing is clear: There's plenty to do in the 24 hours an intern works a week, Payne said.

"The volume of referrals and the volume of calls is exceeding capacity," she said. "I think that really demonstrates the need for those full-time positions in conjunction with a continued internship program."

Reynolds said if the full-time program proves successful, he would like to get to a point where the department has a crisis response team ready 24/7. Success not only includes better prioritizing officer response time, but ensuring better outcomes for residents experiencing crisis, he said.

"Ultimately, the biggest goal is to save lives. That's what we're trying to do," Reynolds said. "If we get a call of someone who has suicidal ideations, you're getting out there and being that intervention and preventing them from harming themselves and potentially others." 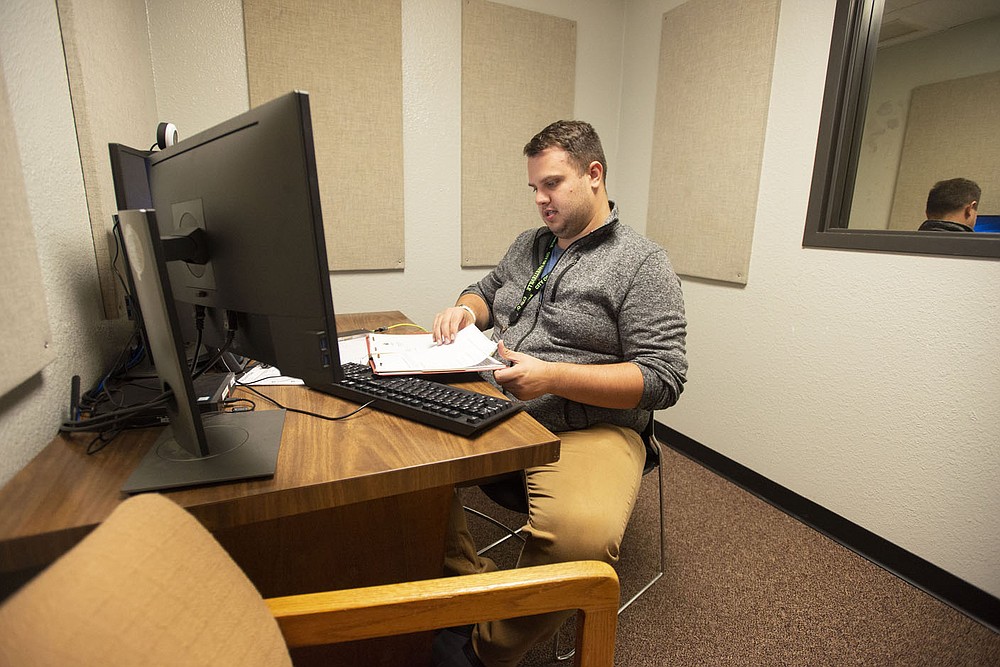 Steven Greathouse works Wednesday Nov. 24, 2021 at the Fayetteville police station. Greathouse is a MSW intern, working on the dedpartment&amp;#x201a;&amp;#xc4;&amp;#xf4;s crisis intervention team. The city received a $250,000 federal grant over two years to hire two social workers and will use another $250,000 out of the regular city budget for two accompanying police officers to create a crisis intervention team. Visit nwaonline.com/211125Daily/ (NWA Democrat-Gazette/J.T. Wampler)

Fayetteville’s Police Department outlined the following goals for its crisis intervention pilot program when applying for a federal grant to pay for two full-time social workers for two years:

• Reduce the criminalization of people who suffer from substance abuse, homelessness and mental health issues.

• Identify victims of crime who would benefit from additional community resources and/or counseling.

• Enhance and increase the community’s trust in the Fayetteville Police Department.