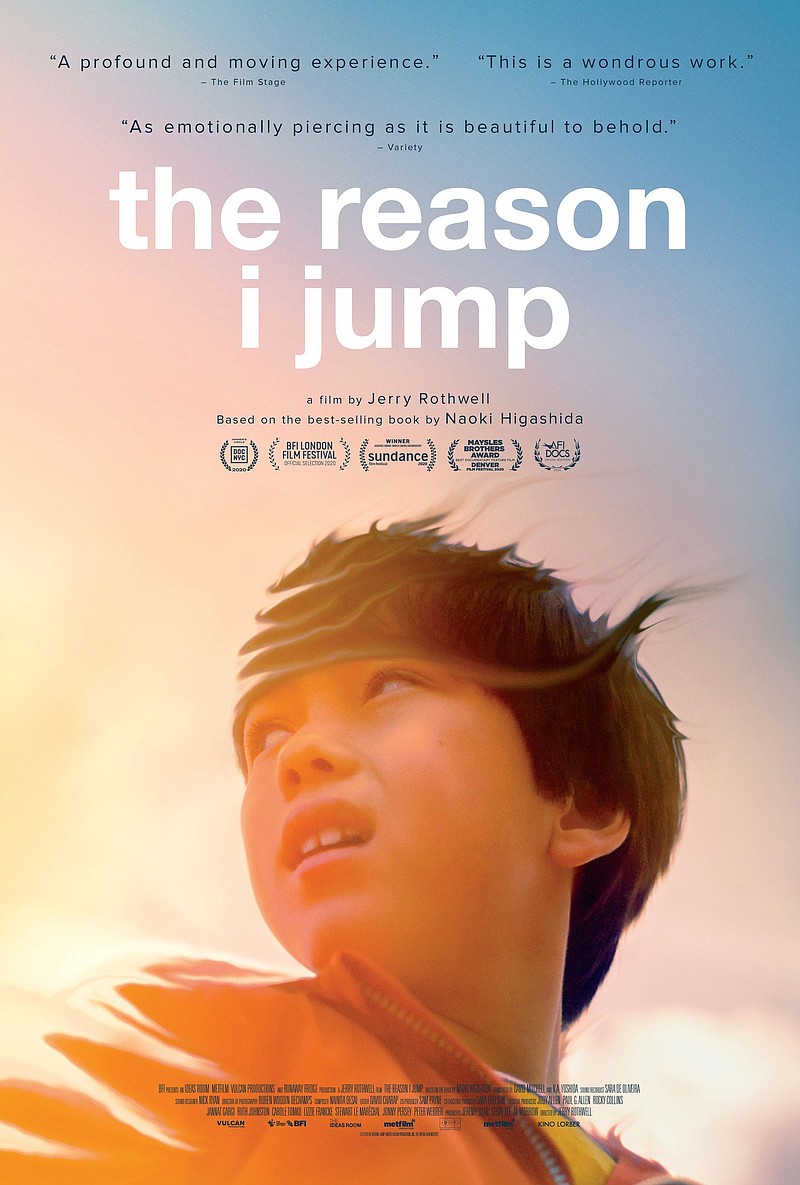 The Reason I Jump

"The Reason I Jump" (not rated, 1 hour, 22 minutes, Vudu, Netflix, AppleTV) Winner of the audience award at this year's Sundance Film Festival, this sensitive and insightful documentary explores neurodiversity through the experiences of five nonspeaking autistic young people from around the world. Based on the book by Naoki Higashida; directed by Jerry Rothwell.

"The Feast" (not rated, 1 hour, 33 minutes, On Demand) An intense and mesmerizing Welsh folk-horror tale, awash in creepy imagery, in which an array of privileged guests participate in a dinner party in a remote house in Wales, unaware that it will be their last supper. With Annes Elwy, Lisa Palfrey, Caroline Berry; directed by Lee Haven Jones. In Welsh with subtitles.

"Kevin Can F**k Himself" (DVD, Blu-ray) The first season of this eight-episode dark comedy (each runs 42-46 minutes), created by Valerie Armstrong and directed by Anna Dokoza and Oz Rodriguez, stars Annie Murphy as Allison McRoberts who, when on screen in color with a laugh track, portrays a typical put-upon sitcom wife patiently dealing with her self-centered husband. When she learns that the perfect future she envisioned is impossible, the screen switches to murky black and white as she collaborates with her neighbor Patty (Mary Hollis Inboden) in an effort to take control of her life. It's not for everybody, but those who find the series irresistible will be happy to know it's returning for a second season on AMC+. Bonus material includes a look at the idea behind the series, a meet-the-characters segment, and a making-of featurette.

"13 Minutes" (PG-13, 1 hour, 48 minutes, On Demand) A storm -- typical in the spring -- is heading toward a small midwestern city. That's not unusual, but this one is different; residents are told they have 13 minutes to find shelter before the largest tornado on record hits. With Amy Smart, Thora Birch, Peter Facinelli, Trace Adkins, Paz Vega, Anne Heche; directed and co-written by Lindsay Gossling.

"Pups Alone" (PG, 1 hour, 47 minutes, in theaters today, On Demand and DVD on Nov. 26) A cheery family comedy (aimed at the very youngest members) in which a jealous inventor hires two thieves to break into his co-worker's house and steal his new creation, which he doesn't know is being guarded -- and exploited -- by a determined pack of neighborhood pups. With Dolph Lundgren and the voices of Jerry O'Connell, Jennifer Love Hewitt, Rob Schneider and Danny Trejo; directed by Alex Merkin.

"Hide and Seek" (R, 1 hour, 23 minutes, On Demand) A convoluted psychological thriller in which Noah (Jonathan Rhys Meyers), following the death of his wealthy father, seeks his outcast brother to make amends and share the family fortune, a pursuit that leads to the discovery of a dark family secret. With Jacinda Barrett, Sue Jean Kim, Joe Pantoliano; written and directed by Joel David Moore.

"The Addams Family" (PG-13, 1 hour, 39 minutes, on 4K Ultra HD Blu-ray and remastered Blu-ray) In recognition of its 30th anniversary, this newly restored version of the classic comedy concerns the reappearance of long-lost Uncle Fester (Christopher Lloyd) from the Bermuda Triangle, which energizes Gomez (Raul Julia) and Morticia (Anjelica Huston) to plan a celebration to wake the dead. But something doesn't seem quite right with Fester's behavior, raising suspicions that he might be an imposter, out to cash in on the Addams fortune. With Christina Ricci, Judith Malina, Dan Hedaya; directed by Barry Sonnenfeld. Bonus content include commentary by the director and an archival featurette.

"The Shuroo Process" (not rated, 1 hour, 35 minutes, On Demand) A comedy, with ups and downs and stereotypical characters, in which a journalist, after ruining her career and getting dumped by her boyfriend, reluctantly participates in a remote wellness retreat with famed Guru Shuroo, whose process includes digital detox, meditation, gas lighting, mescaline trips, and fraud. With Fiona Dourif, Brad Dourif, Eric Roberts, Rainey Qualley; co-written and directed by Emrhys Cooper.

"14 Peaks: Nothing Is Impossible" (not rated, 1 hour, 41 minutes, Netflix) This handsome, authoritative and creative documentary explores Nepal's connection to high-altitude mountaineering via the viewpoint of a Nepali climber's quest to summit all 14 of the world's 8,000-meter (about 5-mile) mountains, including Everest and K2, in seven months. With Nirmal "Nimsdai" Purja; directed by Torquil Jones.

"Last Shoot Out" (PG-13, 1 hour, 35 minutes, In Theaters and On Demand on Dec. 3) A gritty Western actioner where a newlywed finds out that her husband had her father shot down. Running off in fear for her life, she's rescued by a gunman who is determined to keep that errant husband away. With Skylar Witte, Jay Pickett, David DeLuise, Cam Gigandet, Bruce Dern, Michael Welch; directed by Michael Feifer.

"Betrayed" (not rated, 2 hours, 7 minutes, in theaters and On Demand) A poignant if overloaded drama, based on a true story, concerns the plight of an ordinary Norwegian family during World War II when Norwegian Jewish men over the age of 15 are taken to prison camps, leaving their terrified women behind. With Jakob Oftebro, Silje Storstein, Eilif Hartwig; directed by Eirik Svensson. Subtitled.

"Are You Happy Now" (not rated, 1 hour, 35 minutes, On Demand) No, not the 2018 Spongbob episode; this is a romantic comedy in which a man's proposal is met with disdain by his beloved, who refuses to re-create her parent's abysmal marriage. He doesn't give up, but maybe he should. With Ismenia Mendes, Josh Ruben; written and directed by David Beinstein.