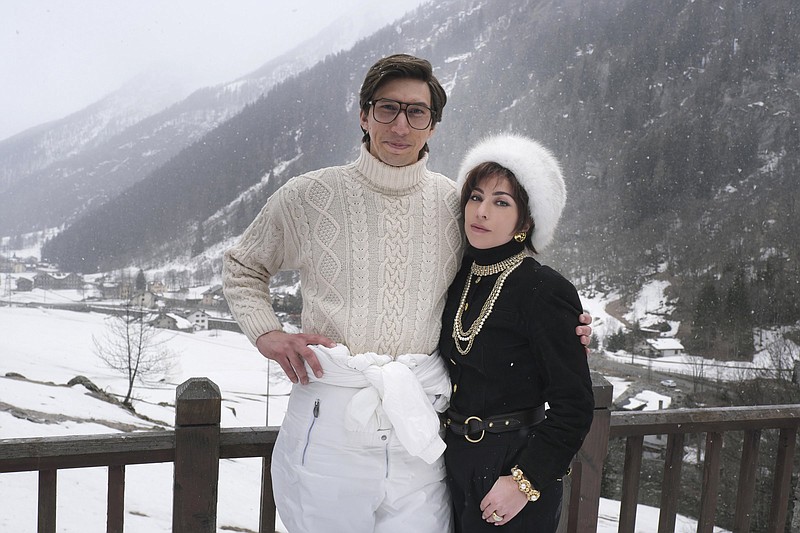 Just in time for the holidays, you can gather up your troops, head to your local multiplex (if it's still standing), and tuck in to Ridley Scott's 157-minute, reality-based opus, and become eternally thankful that you aren't part of the Gucci clan. As bad as you might have it with your own crew, it could be so much worse. It's the anti-family feel good of the year!

That's not to say "House of Gucci" itself stinks -- it's actually quite good -- but the bad vibes keep on coming. It's the first movie I can recall in which every character's most negative first impressions of each other turn out to be spot on.

Take, for example, the many feelings Gucci patriarch Rodolfo (Jeremy Irons) has for Patrizia Reggiani (Lady Gaga), the new girlfriend of his only child, Maurizio (Adam Driver), upon meeting her for the first time. The daughter of a moderately successful trucking magnate, Rodolfo assumes she's primarily after the family fortune. Take her out, he tells his son, have fun with her, but not on your life, do you marry her. He goes so far as to cut Maurizio out of the family fortune, leaving the young man, still in law school, having to go to his future in-laws and beg for a job with the family's trucking company.

TIP OF THE ICEBERG

That's just the tip of the deep-cold iceberg. Later on, the ever-conniving Patrizia pushes her impressionable husband to suck up to his adoring uncle, Aldo (Al Pacino), and push out his cousin, Paolo (Jared Leto) -- a hapless would-be designer whose own father refers to him as "the idiot"-- to take a controlling stake in the family company. Aldo, for his part, has a deeply unfavorable impression of a group of Middle-Eastern investors, led by Nemir Kirdar (Youssef Kerkour), who want to buy his shares; Patrizia doesn't trust longtime Gucci consigliere Domenico De Sole (Jack Huston), and no one likes Rodolfo for much of anything. By the end, everyone has behaved so abominably, the company is wrested entirely out of the family's clawing hands, and that's still not the worst thing to happen to them.

Things weren't always so horrendous, of course. Much like the recent "The Eyes of Tammy Faye," we begin in simpler, happier times, and watch as money and corruption turn everything hellish. After a brief, foreshadowing coda, we start in 1978 Milan, as Maurizio first meets Patrizia at a lavish party, and the couple fly headlong into a romantic swoon. To Rodolfo's consternation, his son and new daughter-in-law begin hanging out with his far more amiable and generous brother, Aldo, who runs the luxury company like the family business it is.

Realizing Paolo has no head for business, or much anything else, seemingly, Aldo turns his affections toward his nephew, entreating him and his young wife to move to New York and help run the empire. Maurizio, much like Michael Corleone, has serious reservations about joining up with the family business. In truth, he seems perfectly happy with his father-in-law's trucking company, laughing and roughhousing with the rest of the blue-collar crew. But Patrizia, seeing the opportunity for power, implores her more passive husband to take his uncle up on the offer, and soon enough they are whisked away to a penthouse apartment in Manhattan, with the Gucci world at their fingertips.

Quickly, that no longer is enough for Patrizia, who further convinces her husband to make moves against Aldo -- releasing damning tax evasion records to the U.S. government with Paolo's unwitting help -- before twisting Paolo away from his own shares of the company. Consolidation comes at considerable cost, however, and the family's continued infighting and subterfuge leaves it ripe for acquisition, eventually putting everyone, even the power couple, in a tenuous position.

For his part, Maurizio begins to pull away from his domineering wife, and begins a new relationship with an old friend Jenny (Florence Andrews), as Patrizia seeks more and more ill-advised council from Pina (Selma Hayek), a low-rent psychic, who becomes her confidant, and helps her plan her revenge against her erstwhile husband.

The "Godfather" angle is pretty obvious -- if nothing else, the weak-minded, ever-stricken Paolo is a perfect Fredo analog -- right down to the bloody betrayals and retributions, but the story, as depicted by screenwriters Becky Johnston and Roberto Bentivegna (from the book by Sara Gay Forden) feels less formally rigid than the Coppola masterpiece. It is, at its root, a story about the corruption of money and power (Maurizio says at one point he's never been happier than when he was just palling around with the other truck workers, one of the guys without the responsibility of the world on his shoulders), between family members, husbands and wives, and parents and children.

There is a lighter touch at work here as well, however, a certain camp appeal (Paolo says of one of his peculiar designs, "It's a memory, wrapped in Lycra"), that keeps the film from feeling too stodgy and maudlin. Scott also delights in hitting the '80s-infused music cues, from George Michael's "Faith," to Blondie's "Heart of Glass," reinforcing the hallmark ostentation and money-mongering synonymous with the era.

As Patrizia increasingly pushes her husband to destroy the boundaries of familial loyalty -- to her mind, the only person her husband needs to be loyal to is her -- the seeds are sown for the family's eventual banishment from the brand (brought from the dregs in the '90s, to its current iconic status by designer/filmmaker Tom Ford, among others) that bears their name.

Scott, a toothy veteran at this point, well knows what to do with material this glistening with possibility: He plugs in his extremely talented cast, and, for the most part, gets out of their way. Driver, Pacino, and Irons do fine work, as does the unrecognizable Leto, who adds a high-pitched whiny delivery to Paolo while also giving him the soulful stare of a man who realizes the deck will forever be stacked against him. But the film truly lives and dies on the performance of Lady Gaga.

Given a role that moves well beyond her solid-but-predictable work in "A Star Is Born," Gaga has to capture the essence of a woman whose lust for power and control slowly bleeds out her compassion and decency until her growing inhumanity renders her a sharp missile of resentment and hostility.

It's a meaty challenge -- without this sense of descent, the film's trajectory feels all too obvious and without friction -- but Gaga, whose stage persona was always a series of similarly outlandish characters, imbues enough of Patrizia's driving intensity, and her shocking vulnerability, to power Scott's narrative. The mark of such work is how the character makes you feel at a given time, and throughout the film, our sympathies run the gamut with Patrizia (trying to make a favorable impression on Rodolfo, Patrizia admires a painting at his mansion: "Picasso?" she asks tentatively. "Klimt," the patriarch sniffs back) even as she inadvertently topples a fashion empire around her.

One can certainly quibble with the filmmakers' somewhat schizoid work with a foreign language -- eschewing subtitles, the film instead has the actors utilizing strong Italian accents with recognizable other bits and pieces (they can say "Ciao!" to one another) as if they were translating themselves on screen -- but it's a masterful rendition of how to make a film that both feels global and provocative, while keeping the scope almost drearily local.