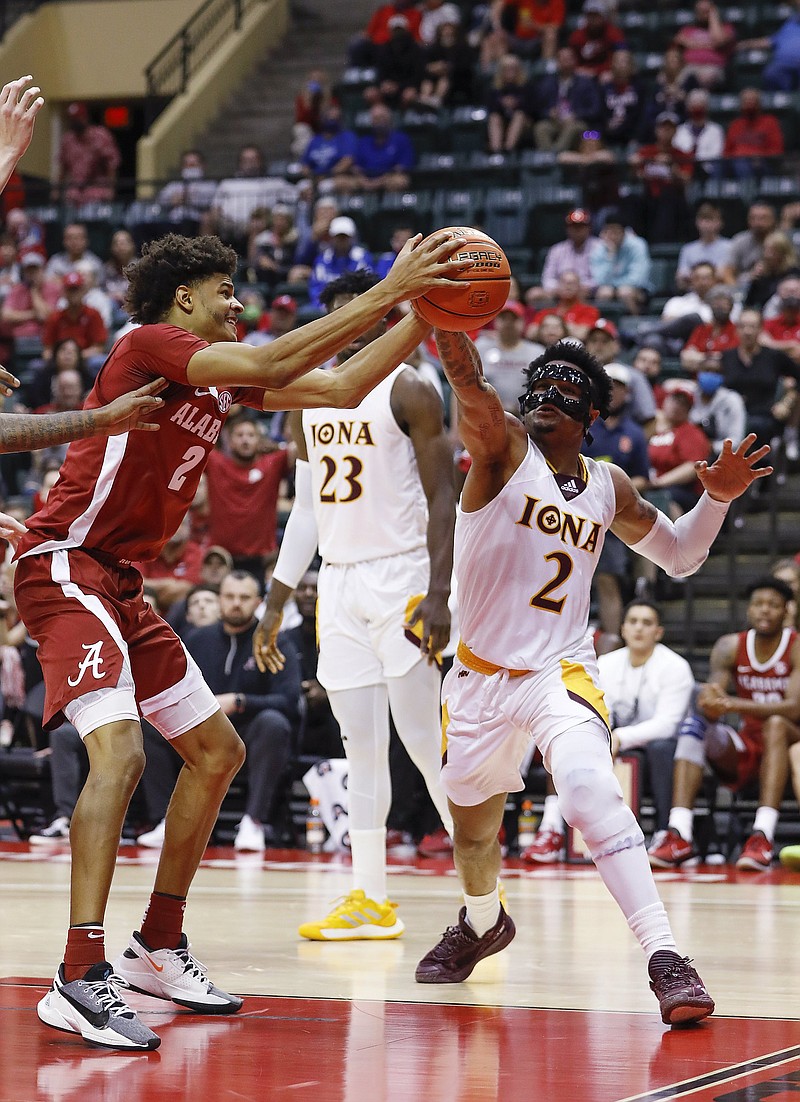 Alabama forward Darius Miles (left) and Iona guard Elijah Joiner vie for the ball during the second half in an opening-round game at the ESPN Events Invitational on Thursday in Orlando, Fla. The Gaels upset the 10th-ranked Crimson Tide 72-68. (AP/Jacob M. Langston)

LAKE BUENA VISTA, Fla. -- Nelly Joseph and Walter Clayton Jr. made key free throws in the final seconds to lift Iona over No. 10 Alabama 72-68 in an opening-round game at the ESPN Events Invitational on Thursday night.

Clayton got an offensive rebound and made one of two free throws to make it 70-68 with 20 seconds left. After Jahvon Quinerly missed a shot for Alabama, Joseph secured the win with two free throws with 9 seconds remaining,

Joseph and Clayton both finished with 15 points.

"I'm happy for the guys," Iona Coach Rick Pitino said. "They are great guys to coach. I'm really, really excited, happy for them."

"It was one of our first goals, and we accomplished it," Jolly said. "Our goal was to start the year 6-0 and we did that tonight."

Alabama (4-1) got 19 points from Jaden Shackelford. Quinerly added 15. There was no immediate postgame media session with the Crimson Tide because they held a lengthy meeting after the loss.

Joiner hit a three-pointer to put Iona up 69-65, but Shackelford connected from long range to make it a one-point game with 56 seconds to go.

Joseph made two free throws during an 11-3 run to give Iona a 59-57 advantage. Alabama's Darius Miles responded with a layup, but Jolly made a three to put Iona back ahead 62-59 at the 4-minute mark. Shackelford's three-pointer put Alabama ahead 54-48.

Iona won despite a 4 ½ minute-stretch early in the second half without a field goal. Alabama was up 33-29 at the half, which matched the biggest lead during the opening 20 minutes.

PARADISE ISLAND, Bahamas -- Freshman Jabari Smith had 14 points to help Auburn regroup from a double-overtime loss and beat Loyola Chicago in the consolation round of the Battle 4 Atlantis tournament.

The Tigers (4-1) held the Ramblers to just two field goals over an 11-minute span in the second half, building a 10-point margin heading into the final minutes.

Walker Kessler added 13 points, 10 rebounds and 4 blocks for the Tigers.

Gabe Brown scored 16 points for the Spartans (5-1), who blew a 14-point lead before halftime and shot just 32% after the break. But Michigan State did enough to take back momentum after the Huskies had gone up 60-55 with 1:41 left and finally secure a spot in toay's championship game.

Adama Sonogo had 18 points and 10 rebounds to lead the Huskies (5-1), while Tyrese Martin added 16 points and 12 boards despite being uncertain to play because of a sprained left wrist suffered in the Auburn win.

Freshman Kendall Brown added 14 points for the reigning national champion Bears (6-0), who had to clean up a mistake-filled first half and keep the Rams at arm's distance throughout the second half.

Vince Williams scored 17 points to lead VCU (3-3), while Levi Stockard had 13 points. The Rams shot 48% after halftime to hang around, frequently within two possessions, but they couldn't quite overtake Baylor.

LAKE BUENA VISTA, Fla. -- Ochai Agbaji had 18 points and Christian Braun added 15 as No. 4 Kansas beat North Texas in the first round of the ESPN Events Invitational.

Agbaji became the 63rd player to reach 1,000 points in Kansas history when he hit a three-pointer to open the scoring 2½ minutes into the game. The guard entered the game just one point away from the milestone.

North Texas (2-2) got 23 points from Tylor Perry. All other scorers for the Mean Green were held to single digits, including Thomas Bell, who picked up his fifth foul midway through the second half and finished with nine points.

KU (4-0) went up 46-31 early in the second half thanks to Remy Martin hitting a pair of a long-range shots and Braun making a three-point play after a steal. Martin, who had 15 points, had been slowed recently by back discomfort.

A dunk by Agbaji and another Martin three-pointer extended the advantage to 53-35 with 14 minutes left.

Chevez Goodwin had 10 points and eight rebounds for USC (4-0).

Ellis scored seven points in a 19-4 run that made it 23-9 midway through the first half and the Trojans led the rest of the way.

Ejike Obinna was 9 of 13 from the floor and finished with a career-high 18 points and 10 rebounds for St. Joseph's (2-2). Taylor Funk added 12 points and eight rebounds.

Erik Reynolds II hit two three-pointers and Funk added a third for the Hawks in the first four minutes of the second half to trim their deficit to 44-37. Isaiah Mobley, in the high-post, slipped a bounce pass to Morgan on the baseline for a two-handed dunk, Max Agbonkpolo made a jumper in the lane and Morgan added a layup to extend the lead 13 about 90 seconds later and the Hawks trailed by double figures the rest of the way.

The Bears played the majority of the game without starting forward Darious Hall, who was limited to six minutes because of back spasms. Freshman guard Camren Hunter took up much of the slack, scoring a career-high 19 points while recording 7 rebounds, 3 assists and 3 steals with no turnovers in 31 minutes.

The Bears got down by as much as 11 points midway through the second half but fought back to make it a two-possession game in the final minute.

Sophomore guard Collin Cooper scored 13 points, with a pair of three-pointers and 4 assists, and senior forward Jared Chatham had 10 points and 8 rebounds, going 5 of 7 from the field, for UCA.

ISLA VISTA, Calif. – A miserable second half kept the University of Arkansas at Pine Bluff from potentially picking up its first victory of the season Wednesday night.

The Golden Lions made just 6 of 26 (23%) shots after halftime, including 2 of 16 (12.5%) from behind the three-point line, in a loss to the California-Santa Barbara in the Cerebro Sports Cali Jam Classic.

Kylen Milton scored 17 points and grabbed five rebounds for the Golden Lions, who allowed the Gauchos to score 13 of the first 15 points after halftime and build a double-digit lead. Milten's three-pointer with 12:39 left in the game would later get UAPB within 54-46, but UCSB reeled off an 11-2 run over the next four minutes to open up an even bigger advantage.

Travonta Doolittle, Trey Sampson and Kshun Stokes all finished with nine points for UAPB. The Golden Lions finished 20 of 53 (37.7%) from the field while the Gauchos were 33 of 58 (56.9%). UAPB's leading scorer Shawn Williams was held to just eight points, eight below his season average.