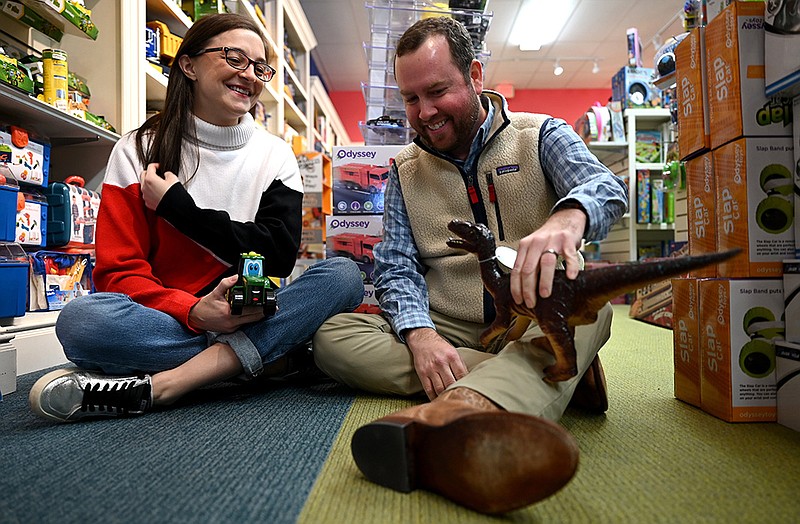 Caroline and Jon Holcomb play with toys Tuesday in their Little Rock store, The Toggery, one of about a dozen family-owned toy stores remaining in Arkansas. (Arkansas Democrat-Gazette/Stephen Swofford)

The pandemic had just begun, retailers across the state -- and country -- were shuttering, and the owners of The Toggery were staring at several major revenue-generating seasons for their stores, including Easter, when there might not be any business at all.

"Like any small business, we were terrified," said Jon Holcomb, who with his wife, Caroline, owns the children's apparel and toy store. "We thought that was the end. How could we possibly survive this?"

When the pandemic swept across the United States early in 2020, many retailers -- particularly small, family-owned businesses with brick-and-mortar operations -- didn't know how or if they would survive weeks, even months, of being closed to customers.

Mom-and-pop toy stores, already a shrinking, endangered industry, were particularly susceptible to consumer fluctuations that accompanied the pandemic. These businesses are highly seasonal and operate on razor-thin margins, meaning the prospect of shutting down for more than a couple of weeks presented a potential death knell.

"We made the decision to close our doors and do curbside [orders] only six weeks before Easter," Jon Holcomb said. "It was crushing. I didn't know how we would get through it."

The Holcombs bought The Toggery in 2017. It has seen a handful of owners since it opened in 1948.

There are maybe a dozen family-owned toy stores remaining in Arkansas, with many closing in recent years in places like Eureka Springs and Little Rock. It's unclear whether they exited the business because of covid-19 or whether they'd bowed out before.

Across the U.S., it's also hard to pin down a precise number of how many of these stalwarts of magic and fun for children remain.

The American Specialty Toy Retailing Association, an international trade group for the specialty toy industry, has some 1,800 members, including independent retailers, manufacturers and sales representatives, according to the group's website.

The ones in Arkansas that survived the months that businesses shut down in 2020 have faced ongoing challenges, like trying to secure orders from global supply chain bottlenecks that continue to cripple retailers large and small.

But it was unclear whether that rebound was going to be possible as owners and managers began to hear from vendors last spring to order early or risk having nothing in stock come Christmas.

"There have been shortages over the years for various things," said Josh Hearn, manager for the Learning Oasis & Toy Zone in Fort Smith. "I can't remember an instance where it was everything."

The Learning Oasis & Toy Zone also has a location in Fayetteville.

Family-owned toy stores have long competed with big box retailers. Owners and managers said they differentiate themselves from the likes of Target, Walmart and even Amazon by offering products not available from those companies and also providing personalized customer service and events to connect with the communities they serve.

"The difference between us and Walmart and Target is we try our very best to carry products different than they carry," April Spencer, who co-owns Kindness & Joy Toys in Fayetteville with her husband, Darryl, said. "I also think what sets us apart is the community involvement. You're not going to get that [at big box stores]. That is the fun part about what we do."

Kindness & Joy Toys recently had an event where families could go to the store and decorate Christmas trees to take home. They also host events with a local nonprofit and a game night for children.

Even with that personal approach, specialty toy stores are competing once again with big retailers for space in shipping containers and for products from manufacturers in China that are more eager to fill orders of thousands of pieces rather than orders of a few hundred needed to stock shelves of small toy stores across the U.S.

So far, they're absorbing price increases. While the mom-and-pop stores may be more expensive than big retailers, they try to keep their prices in-line or sometimes lower than larger rivals to maintain a competitive edge.

Now vendors are charging more for shipping, which before the pandemic was either free or relatively cheap, Jon Holcomb of The Toggery said. Some products, like toys made from wood, are also more costly because of increases in lumber prices, he said.

"The margins in the toy business are not as good as other retailers," he said. "Now, we are getting charged for shipping, which cuts into our margins, so we either have to raise the prices or absorb it and just take the low margin. We don't want to pass on expenses to the customer."

Predicting when products will arrive has also become a challenge. Holcomb said The Toggery usually orders a few products to test them out with consumers first. If they sell out, then it orders more.

Now, they're having to gamble on toys that have been untested in their stores, ordering as many as they can get just to make sure they have products in stock.

"We would buy six, and if we sold five in a month, we'd order 12 more," Holcomb said. "This time we might order 36 and hope it's a good item because if we don't get the 36 now we might not get it. There's a lot more risk involved."

Anne Marcus, owner of The Toy Chest in Hot Springs, said some weeks products will trickle in a few at a time while other weeks huge orders will suddenly arrive.

That's made it difficult to manage storage as well as what is going to be in stock and what isn't, she said.

Marcus said The Toy Chest still is waiting on some orders placed in May and August.

"It is just a challenge," Marcus said. "We may not have what we typically have but we still have plenty of merchandise, but that is the way store owners are having to deal with things, figuring out a way to work with what you have got."

Marcus' parents opened The Toy Chest in downtown Hot Springs in 1989. She began to take over operations as her parents aged and after her father passed away in 2019.

The Toy Chest is one of the few remaining mom-and-pop toy stores in Arkansas that's stayed under the same family ownership from the beginning.

One trend during the pandemic is that several specialty toy stores in the state have been sold to new owners. Those who bought the stores said there were numerous factors for the sales of the businesses, but the weight of the pandemic and the rapid adaptations the stores had to make to continue to generate sales might have been the impetus for previous proprietors to finally decide to exit.

Brian Long, an investor in his 30s, said he was looking to buy a business when an adviser presented him with the option to purchase The Learning Oasis & Toy Zone.

Long purchased the stores about a month ago.

For the previous owners, "I am sure there were months that it was scary, and I am sure as soon as they realized that schools were going to be mostly remote for a year, that was a real wake-up call," Long said.

"If anything helped me get a good deal, it was the momentary reduction in sales," Long said. "I don't think it necessarily was discounted because people are afraid of brick-and-mortar, but one year of a lower bottom line revenue probably did drop the value a little bit."

All of the mom-and-pop stores had to quickly adjust to different ways to sell products. They built websites to fulfill orders online, relied heavily on social media to communicate with customers and transitioned to delivery and curbside pick-up models to help get them through times when they had to close for in-store shopping.

Such abrupt transitions and the need for extreme agility might also have led some owners to make the decision to sell.

The Learning Oasis & Toy Zone, for example, had employees use video technologies on mobile phones to help customers pick out items remotely. Sometimes they would text pictures of products to clients.

April and Darryl Spencer, both retirees, purchased Kindness & Joy Toys in Fayetteville in January. The previous owner maintained sales during the pandemic by doing pop-up events in people's homes and "out of the trunk of her car," they said.

"The store became more of a fulfillment center, making deliveries everyday because so many kids were home and stuck in their houses," April Spencer said. "It was a very smart move."

The couple launched an online shopping platform for Kindness & Joy Toys to create another revenue stream in case stores had to close again.

"A lot of people order online, and then we will pull it, wrap it and have it ready and back out in their car in a couple of minutes," Darryl Spencer said. "We still do a lot of online. We don't ship a ton, but we do ship all across the U.S."

When the Holcombs, the owners of The Toggery, got word they'd have to shut their stores down last year, they launched an e-commerce website in two weeks, Jon Holcomb said.

In March, the Holcombs acquired Dilly Dally's Toy Store in Rogers, which first opened in 2000. It also has an e-commerce business that launched during the pandemic.

"Everybody was just beat up after that first year [of the pandemic]," Jon Holcomb said. The previous owner "may have just said, 'OK, I am tired.'"

"It was just good timing for us really," he said. "She was ready to get out, and we were anxious to expand our toy business."

What the Holcombs see as remarkable about the specialty toy stores that survived some of the most overwhelming retail challenges in recent history is the ability the stores have had to quickly adjust to keep business going.

There will likely be ongoing supply chain issues into the first quarter of 2022 and perhaps beyond, but the stores have been able to adapt in creative ways to keep customers engaged and shelves stocked.

"It's a lot more work than it used to be, all of these changes with covid," April Holcomb said. "We're still young enough in our careers that this is our plan for the rest of our lives."

For the Holcombs and the owners of the other stores, the hard work is worth it.

"There is some magic and nostalgia about coming into a toy store and bringing your kids into a toy store for birthdays and Christmas," April Holcomb said. "From the owners' perspective, witnessing that and being a part of that is more rewarding than the income we might make doing something else."