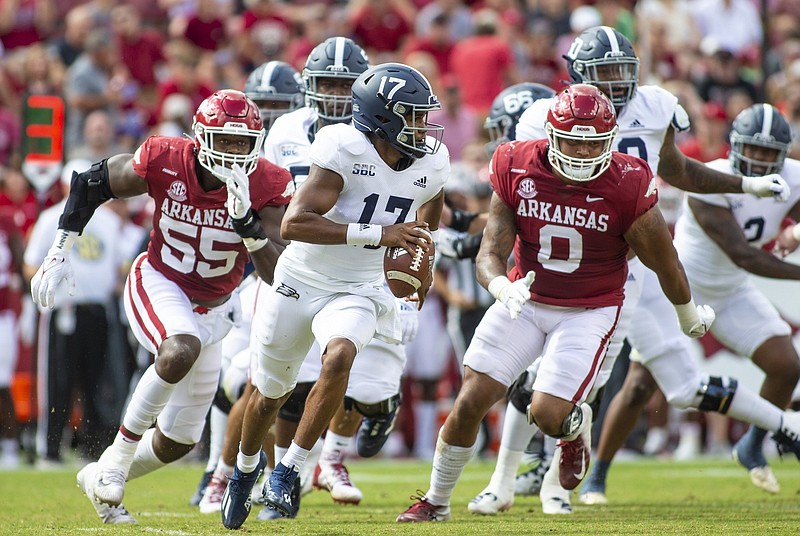 Senior defensive linemen Tre Williams (55) and Markell Utsey (0) transferred to Arkansas during the offseason after beginning their collegiate careers at Missouri. The Razorbacks close out the regular season against the Tigers today in Fayetteville. (Special to the NWA Democrat-Gazette/David Beach)

FAYETTEVILLE -- A rivalry doesn't have to be bitter or hateful.

But those elements help ratchet up the intensity of one.

This week, which is termed Rivalry Week in college football, is filled with longstanding feuds, bad blood and antics on and off the field in matchups like the Egg Bowl contested Thanksgiving Day by Ole Miss and Mississippi State, the Iron Bowl between Alabama and Auburn and many other hot traditional games like Michigan vs. Ohio State.

The Arkansas-Missouri border war, renewed today at 2:30 p.m. at Reynolds Razorback Stadium, cannot match those rivalries in length or animosity or passion, but recent events are stoking the flames in what has been dubbed the Battle Line rivalry.

The Razorbacks' defensive front features two graduate transfers in Tre Williams and Markell Utsey, a Little Rock native, who have degrees from Missouri.

Banister dropped the nothing-but-truth lines about the rivalry this week that have to rankle Arkansas football fans: "It's something that we take pride in, definitely. I think we've mentioned we've held this trophy for over 1,800 days. We'd like to add another 365 onto that calendar."

Yes, some elements are falling into place for this short-term rivalry to start having longer-term consequences for residents of the Natural State and the Show-Me State.

"I like the fact that we're trying to get this to be a rivalry game," second-year Arkansas Coach Sam Pittman said. "Obviously rivalry games aren't any good if you don't have two separate winners every now and then. It's good for the ones that win it all the time. Missouri's beaten us several years in a row and so it's probably a little bit more of a rivalry for us since we haven't been able to beat them."

Drinkwitz, who isn't shy about stoking controversy, said this with a big smile at SEC Media Days this summer when asked if Oklahoma joining the SEC would rekindle their rivalry: "I kind of like the rivalry we've got with Arkansas. I don't remember the last time they beat us, so I kind of like that one."

Drinkwitz is not wrong.

Missouri (6-5, 3-4 SEC) has won five in a row in the series, including the last two contested in the state of Arkansas. The Tigers hold a 9-3 edge in the all-time series.

Arkansas (7-4, 3-4) has gotten more national publicity this season, has been in the polls longer, has played a tougher schedule and is a two-touchdown favorite today.

Much is at stake for the Razorbacks. Not only can they claim a third rivalry game trophy for the first time, they can post their first eight-win regular season since 2011 and snap the painful losing streak to the Tigers. There is chatter around the program that a win might be tantamount to earning a bowl berth in Florida in the Gator Bowl.

"It's really big," senior linebacker Hayden Henry said of trying to win a third trophy game. "It's a goal that we had set out since the beginning of the season, to have all three of these trophies. Now we have two and we have one more left to get on Friday."

The newness of the rivalry is evident.

Former Arkansas Coach Bret Bielema repeatedly referred to it as the "Borderline" rivalry while going 1-3 against the Tigers. Pittman has also made the same reference a couple of times, though he got it right this week in his lone media appearance on Monday.

Arkansas has not won in the series since former Missouri linebacker Eric Beisel famously warned the favored Razorbacks not to step off the bus in Columbia, Mo., for the 2016 game. Behind Odom's gutsy fake punt call from the Missouri 7, the Tigers rallied from a 24-7 deficit to win 28-24 that day.

Arkansas fifth-year wideout Tyson Morris said he was unfamiliar with the Beisel story.

"I don't remember that," Morris said. "That was funny."

Reminded that Arkansas hasn't won a game in the series since then, Morris added, "Yeah, we realize that. That's why it's another week to get better so we're all practicing hard to come out with great focus and we want to bring back that trophy."

Missouri junior defensive back Martez Manuel said he got to campus at the perfect time to watch the Battle Line Rivalry grow.

"I felt like before it wasn't much of a rivalry," he said. "But now that Coach Odom is there and Tre's there and Utsey's there, you can feel more of the tension, more of the rivalry. I think that's a lot of fun.

"The emotional level definitely is high because you want to play good for people that you know and you want to play for your school. I tend to get pretty emotional in games like this. ... I can already feel myself getting goosebumps when I think about the game."

Said Drinkwitz, "When we play, it's going to be our team versus their team and trying to win that trophy. And I don't think there's any ill will in this game at all. I think it's a good, old-fashioned rivalry, where you're trying to play for your state and your team, and as a competitor when the game's over you want to be successful."

Pittman might have other thoughts about everything being jolly between the schools. He was was noticeably frustrated by the Tigers' run of minor injuries on defense last year that slowed offensive coordinator Kendal Briles' fast-tempo attack.

Pittman was strangely short when asked if he'd had conversations with Drinkwitz since last year's game, won 50-48 by Missouri on Harrison Mevis' 32-yard field goal as time expired in Columbia, Mo.

There are suggestions that Drinkwitz's comments about the series at media days didn't play well in the halls of the Smith Football Center at Arkansas.

Then there's the case of Arkansas tailback Dominique Johnson, who had been committed to Missouri right up until signing day two years ago. Johnson, standing up at the podium during his Crowley (Texas) High signing ceremony, pulled off a Missouri cap and tossed it to the gymnasium floor before unzipping his coat to reveal an Arkansas T-shirt. He became the first Arkansas signee of the class on Dec. 18, 2019.

Johnson's father accused the Tigers of promising his son a shot at tailback but actually wanting him to convert to linebacker before signing day.

Johnson has flourished this season, with 479 rushing yards, 8 total touchdowns and a team-high 6.0 yards per carry among regulars.

Pittman was asked if Friday's game might have more importance for Johnson.

Drinkwitz and Pittman seemed to go out of their way to not fan the flames of the rivalry this week.

Drinkwitz said Pittman was his "obvious" choice for SEC Coach of the Year.

"I think Sam Pittman is what the University of Arkansas needed at the time," Drinkwitz said of Pittman's hiring in December 2019. "I think he was a tremendous hire, and hats off to the athletic director [Hunter Yurachek] and the group that was involved in that."

The border war, given its Battle Line Rivalry name by former Razorback and pioneering trophy creator David Bazzel, came into being just seven years ago, two years after Missouri joined the SEC. Because Arkansas' traditional Thanksgiving weekend opponent LSU preferred a season-ending matchup with SEC newcomer Texas A&M, the Razorbacks were matched up against the Tigers, their closest geographical partner in the league at 300 miles away. Oklahoma will claim that distinction at 240 miles when the Sooners join the SEC.

Pittman made a courtesy call to Drinkwitz early on the scheduled week of last year's game to let him know Arkansas was short on available players due to covid-19 issues and unlikely to play the game that week. The call allowed Missouri to turn its attention to Vanderbilt for a rescheduled game (won 41-0 by the Tigers) instead of burning time on Arkansas preparation.

The following week, Missouri won the hotly contested battle in Columbia, Mo., that turned into a shootout between Arkansas quarterback KJ Jefferson, making his second career start, and the explosive Missouri offense.

Missouri tailbacks Larry Rountree III and Tyler Badie romped in the fourth quarter, while Rountree amassing 185 yards and Badie 79. Quarterback Connor Bazelak, who suffered a torn knee ligament against Arkansas the year before, passed for 380 yards on 32 of 49 completions.

The Tigers outgained Arkansas 653-566 in total offense last year in a shootout reminiscent of the Hogs' 42-35 loss at Alabama last week.

That result improved Missouri's record to 3-0 in the series in games decided by one score since the renewal of the rivalry in 2014.

Pittman is well aware of the pain the Tigers have inflicted on the program in recent years, including a 48-45 win at Razorback Stadium on Tucker McCann's 19-yard field goal with 5 seconds remaining, moments before Bielema was fired on Nov. 24, 2017.

The opportunity to grab a third rivalry trophy is momentous to Pittman.

"We have an opportunity to have all three of them and ... I don't think this is bulletin board material but we want them," Pittman said. "And it's never been done in the history of Arkansas and I know that that history's short ... but to have them all three would be a big deal for us, and we'll see if we can get them."