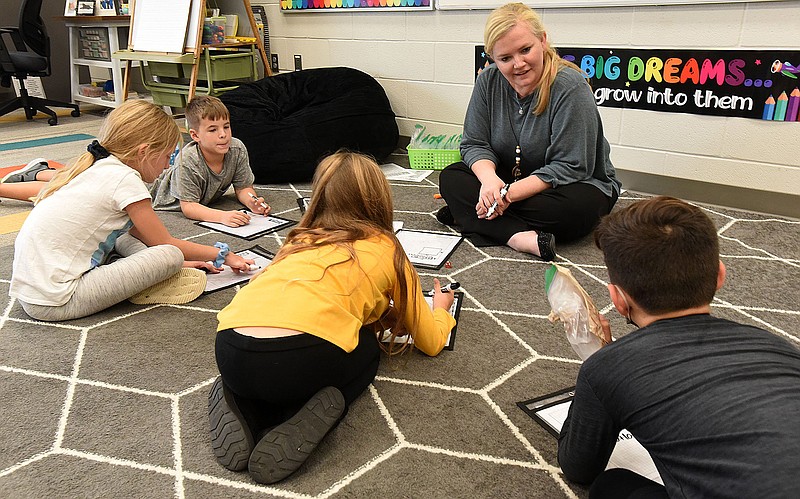 Teacher Nakia Richter works with a group of her third-grade students this month at Evening Star Elementary in Bentonville. (NWA Democrat-Gazette/Flip Putthoff)

Arkansas' public schools have yet to recover from the precipitous, pandemic-induced enrollment drop of 2020.

At the same time, the state's number of home-school students that ballooned by thousands last school year has dipped but is still thousands over the pre-covid-19 totals.

As of Nov. 17, home-school registration was 26,467, said Kimberly Mundell, spokeswoman for the Arkansas Division of Elementary and Secondary Education.

That compares with 26,961 at the same time last year, Mundell said.

"We haven't rebounded back to where we were before covid-19," Arkansas Deputy Education Commissioner Ivy Pfeffer, said about the counts in the state's 261 traditional and charter school systems. But she also said home-school numbers provide a good indication of the whereabouts of the former public school students.

"You hear in a lot of other states that they lost touch with significant numbers of students," Pfeffer said. "I think for us -- in terms of overall numbers -- we know where they are because we did see that increase in home-school numbers. And that sustained number of students in home schools still matches the loss we see."

The number of Arkansas home-school students exceeds the enrollment in the Springdale School District, the state's largest public school system with 21,796 students, not counting prekindergarten children. The Little Rock district is the second-largest with 20,745, and Bentonville is third with 18,536. While Springdale and Little Rock have lost enrollment, Bentonville saw a 3.1% increase from last fall -- and 31% in the decade since 2011.

Home schools are not public schools. Home-school students are those whose parents or guardians have opted to assume the full responsibility of educating their children -- including the financial cost of curriculum. Parents who home school must register their intent to home school with the state.

Pfeffer said home-school numbers fluctuate over the course of a school year and are particularly likely to grow with the start of a semester, including the start of the spring semester in January.

On the other hand, public school enrollments typically dip over the course of a school year, although that decline was minimal over the course of the past year, said Pfeffer, who also said more detailed analysis of the student counts and movement of students will be compiled in the coming weeks.

The annual October enrollment counts in school districts are informational and can be used for detecting trends and planning for building new schools or closing or reconfiguring the use of older campuses.

Enrollment is also used to determine annual state funding for districts in the forthcoming year. But that per student state funding is based not on the October enrollment but on averaging the student counts from each of the first three quarters of the school year.

State foundation (per-student) funding this year is $7,182 per student. Districts that lost students last year saw declines in state funding for this year -- but that loss is being offset at least in part by special federal covid-19 relief money.

The Little Rock School District's 2021-22 budget, for example, approved in late September, reflected a reduction in the amount of state foundation aid -- from $52 million last year to $47 million this year. The district's kindergarten-through-12th-grade count has dropped by 686 over two years.

The Little Rock district is to receive almost $100 million in federal covid relief money over a handful of years. But, at the same time that it is relying on the special federal funding, the Little Rock School District is in the early stages of possibly combining or re-purposing what Superintendent Mike Poore recently called "ouch points" or schools with falling enrollments.

The Pulaski County Special School District, which has lost 536 students over two years, will similarly receive almost $40 million in the special aid.

The state enrollment among grade levels varies, but the enrollment in most grades this year is about the same as in October 2020, according to the state figures.

Another result of the covid-19 pandemic is the much more common use of virtual or remote instruction by public school districts.

Remote learners are enrolled in traditional school districts or charter schools, but they are taught at home with school-provided teacher guidance and district-supplied technology and other materials.

Last school year, when there were initially no covid-19 vaccinations and then vaccinations just for adults, more than 88,000 of the state's students were virtual learners and another 55,000 were considered hybrid learners -- using a mix of on-campus and at-home learning.

This school year, the number of virtual students has diminished significantly to about 18,523, Pfeffer said. That's about 3.9% of the total public school enrollment, she said.

This year's total student count in the state's open-enrollment charter schools -- public schools operated by nonprofit organizations other than traditional school districts -- is 23,831.

The state's largest charter school is the 3,885-student Arkansas Virtual Academy, which is based in Little Rock but serves students statewide.

That's followed by the 3,469 student-LISA Academy system, which has campuses in Central Arkansas and one in Springdale with others in Northwest Arkansas under construction. The system also opened the Arkansas Lisa Academy Hybrid School this year in which students learn at their homes but are required to visit a campus at least twice a week.

Academics Plus Public Charter School system, with headquarters in Maumelle, has an enrollment of 1,685.

One of the state's very newest charter schools, Westwind School for Performing Arts in North Little Rock, opened this year with 63 students.

The 96 private and parochial schools that are accredited or are seeking accreditation from the Arkansas Non-public School Accreditation Association have a total enrollment of 18,920, according to the organization's annual directory.

Currently the largest of the private schools is Little Rock Christian Academy with 1,476 students.

Education leaders are waiting to see what impact the recent availability of covid-19 vaccinations might have on school enrollments in the coming months and years.

The vaccinations for children ages 5-11 became available earlier this month. Shots for older children were approved this spring.

Pfeffer, the state deputy education commissioner, declined to predict if and when traditional public school enrollments will reach their pre-pandemic levels. But there could be at least some indication about the impact of vaccinations on enrollment as soon as the start of the second semester in January, she said.