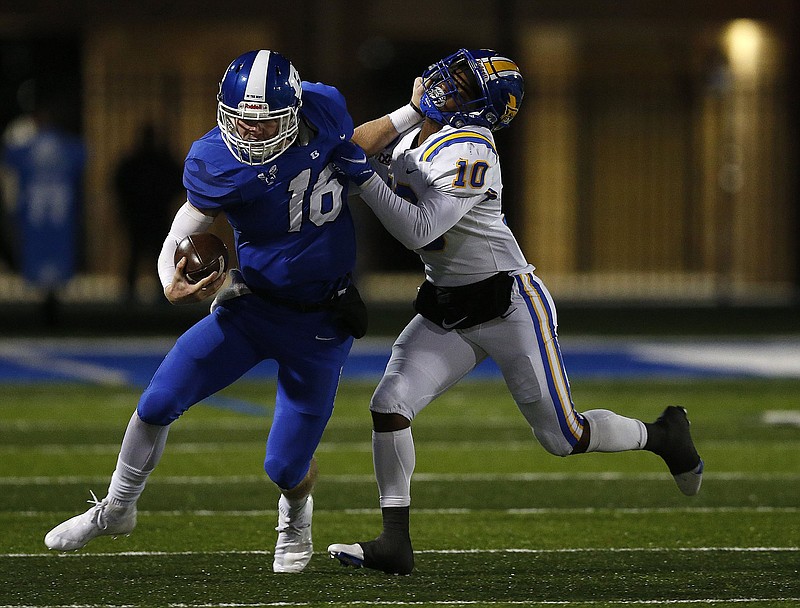 Bryant quarterback Carson Burnett (16, left) runs away from North Little Rock defensive back Zack Robinson (10) during the fourth quarter of the Hornets’ 28-13 victory over the Charging Wildcats on Friday in Bryant. More photos at arkansasonline.com/1127brynlr/. (Arkansas Democrat-Gazette/Thomas Metthe)

BRYANT -- On a night where his team struggled to find any kind of consistency on offense against rival North Little Rock, Bryant's Buck James did what's he done several times before to get his Hornets on track.

The sixth-year coach relied on his defense, and that unit responded in a way that forced even the calmest of coaches to flash a smile by game's end.

Bryant received a pair of huge sacks from Brandon Jones late in the fourth quarter and got a game-sealing interception return for a touchdown from Miguel Graham in the final minutes to knock off the Charging Wildcats 28-13 in the Class 7A semifinals Friday night at Hornets Stadium.

"I tell you what, to hold that team to 13 points is pretty good," James said. "We didn't do a good job of tackling in the first half, I thought, but in the second half, the defense played well. And to be honest with you, we had to play well on that side because [North Little Rock] had zero respect for our offense.

"We couldn't run the football, we couldn't throw the football. But that's a credit to North Little Rock because they brought their A game."

But even the Charging Wildcats' A game wasn't enough to pass their toughest test of the season.

Carson Burnett threw for 160 yards and two touchdowns, and Chris Gannaway carried 11 times for 109 yards and a score for Bryant (11-1), which will get a chance to win a fourth consecutive state title next week when its plays Fayetteville in the finals Saturday night at War Memorial Stadium.

Mytorian Singleton also caught five passes for 105 yards and scored on a key 24-yard touchdown with 7:40 left in the game for Bryant.

However, it was the Hornets' defense, particularly in the second half, that allowed them to beat their 7A-Central Conference rivals for the seventh time in a row.

North Little Rock (10-3) racked up 199 yards of offense in the first half but accumulated only 97 yards after halftime, with 41 of those coming on its final drive. Malachi Gober, who completed 9 of 12 passes in the first two quarters, connected on just two of his 11 throws in the second half and tossed two interceptions in the fourth.

"In a game like this, there's going to be one or two plays that are going to decide the outcome," North Little Rock Coach Randy Sandefur said. "The final score really isn't indicative of how hard my guys played. We just didn't make enough plays to pull it out.

"They're a great, great team, and they deserve to go to the finals."

Torrance Moore finished with 138 yards rushing on 22 carries for the Charging Wildcats, who took it to the Hornets in the first half.

After forcing the Hornets into a quick three and out to start, North Little Rock methodically drove 71 yards in 12 plays, with Gober finishing it off with a 4-yard touchdown run to give the Charging Wildcats a 7-0 lead.

North Little Rock threatened to extend its margin on its following series after Johnny Lewis returned a punt 61 yards to Bryant's 6-yard line.Malachi Graham, a defensive back who doubles as Bryant's punter, came up with a touchdown-saving tackle on the return when he managed to slip through a fleet of blockers to wrestle Lewis to the ground. Three consecutive running plays netted five yards before a jump pass on fourth down fell incomplete, allowing Bryant to escape any further damage.

"It was the biggest play of the game," James explained of Graham's stop. "He makes that tackle, and then we get a stop on fourth down a few plays after that. It was just a huge stop, and we needed that because again, we just weren't playing well at all."

North Little Rock did eventually grab a 10-point lead at the 11:02 mark of the second quarter on a 40-yard field goal from Devin Jackson, but Gannaway would later give Bryant the boost it needed to finally rev up its offense.

The junior took a handoff from Burnett and sidestepped a pair of defenders before racing 62 yards down the right sideline for a touchdown with 6:47 left in the period. After Jackson's 43-yard field goal attempt hit the left cross bar on the Charging Wildcats' next trip, Burnett guided a 7-play, 80-yard drive that was capped by his 11-yard scoring toss to Blake Everett to put Bryant up 14-10.

Jackson nailed a 38-yard field goal with 3:43 to go in the third quarter to slice the Charging Wildcats' deficit to 14-13 until Singleton's touchdown catch. Miguel Graham would then clinch Bryant's berth in the title game when he stepped in front of Gober's pass and raced 17 yards untouched for a score with 1:17 remaining in the game.

"I feel blessed, there's no doubt about it," James explained. "It's really a dream come true. Who would've ever thought that we'd go to four state championship games in a row. Our kids have worked hard, done everything we've asked them to and more.

"They've given us another chance to play for a state championship. It's truly a blessing."