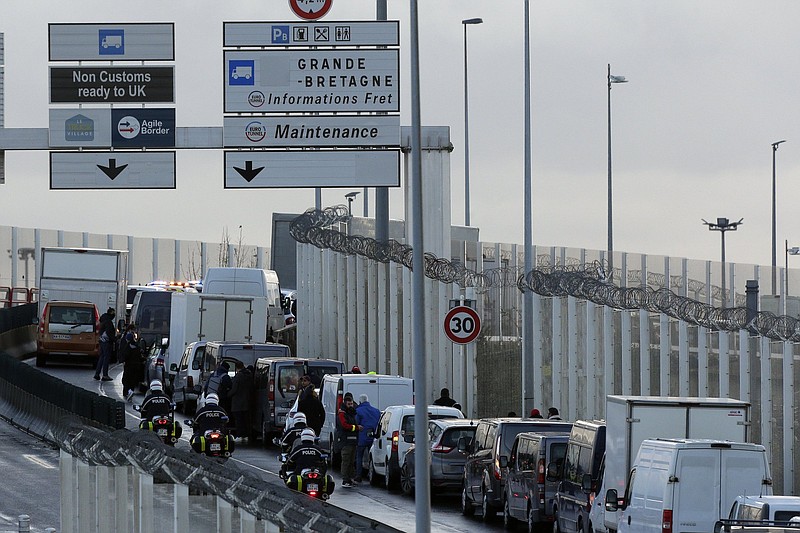 Cars and trucks are stopped as French fishermen block the entrance of the Eurotunnel, in Coquelles, northern France, on Friday. Video at arkansasonline.com/1127fishing/. (AP/Michel Spingler)

CALAIS, France -- French fishing crews briefly blocked French ports, ferry traffic across the English Channel and the freight entrance to the Eurotunnel on Friday to disrupt the flow of goods to the U.K., in a protest over post-Brexit fishing licenses.

It's the latest tension point between the neighboring countries, which are also trading blame for not doing enough to prevent the deaths of at least 27 migrants whose boat sank Wednesday off Calais, in the choppy waters of the world's busiest shipping route.

Last week in Brittany, French Sea Minister Annick Girardin announced that she was working on a compensation plan for fishermen who fail to obtain a license and who would have to cease their activity. But it left the French fisheries committees cold. Now, they are taking matters into their own hands.

[Video not showing up above? Click here to watch » arkansasonline.com/1127fishing/]

Lines of traffic stacked up on the A16 freeway on the French side, but the situation was described by officials as "calm" and "peaceful." The Eurotunnel train service -- that carries freight and all forms of vehicles, including cars, motorbikes, camper vans, caravans, coaches and lorries -- said it is putting on 12 additional freight trains to clear the backlog.

In the port of Calais, a blockade of ferries also took place, stopping ships that provide links with the U.K. Six fishing boats from the port of Boulogne-sur-Mer blocked access to the Calais port for 90 minutes.

"This is a symbolic action, but if it continues we will show more teeth," Lepretre added, speaking to French media.

One fisherman, Stephane Ramet, who has been fishing since 1987 and was refused a license by the British, described the debacle to French media as "an injustice." "I've been fighting for this profession for a whole lifetime. We want to be able to access the 6- to 12-mile zone as we have always done. "

Before Brexit, French fishermen could fish deep inside British waters. Now they need to be granted a special license from British authorities to fish in certain areas. Most French boats have received the special licenses. Now the dispute boils down to just a few dozen French licenses that have not been granted by the U.K.

The fishermen are protesting to "respond to the derisive and humiliating attitude of the English," Gerard Romiti, president of the French fishing committee, told reporters.

"We don't want handouts, we just want our licenses back. The U.K. must abide by the post-Brexit deal. Too many fishermen are still on the sidelines, " he added.

A spokesman for Prime Minister Boris Johnson said the U.K. was "disappointed by threats of protest activity."