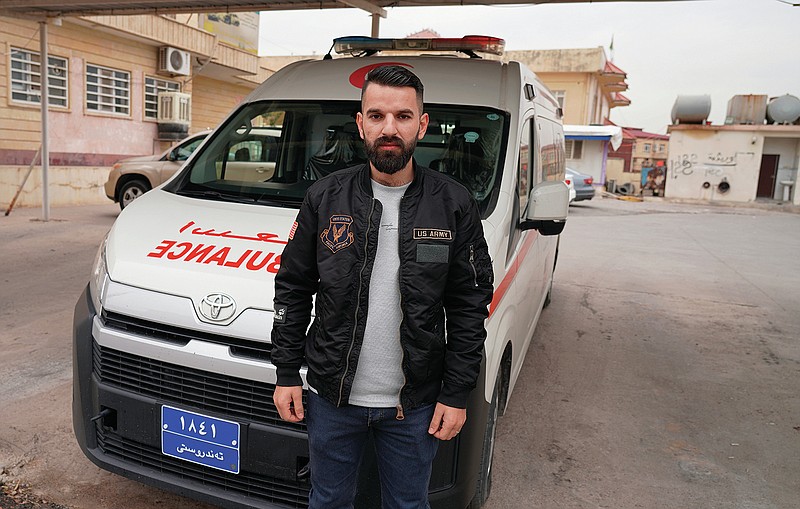 Zaid Ramadan, who recently returned from Minsk with his pregnant wife Delin, after they were caught by Polish authorities, poses for a picture in Dahuk, Iraq, Saturday, Nov. 20, 2021. The couple were among a disproportionate number of Iraqi migrants, most of them from Iraq&#x2019;s Kurdish region, who chose to sell their homes, cars and other belongings to pay off smugglers with the hope of reaching the European Union from the Belarusian capital of Minsk &#x2014; a curious statistic for an oil-rich region seen as the most stable in all of Iraq. (AP Photo/Rashid Yahya)

DOHUK, Iraq -- The smuggler had said the car would come in 10 minutes, but Zaid Ramadan had been waiting in the dense forest straddling the Poland-Belarus border for three hours, desperate for signs of headlights in the mist -- and a new life in Europe.

His pregnant wife Delin shivered under a blanket. She had been against leaving their life in Dohuk, a mountainous province in the northern Kurdish-run region of Iraq. The journey was perilous, expensive and the change too drastic, she told him.

"But I convinced her to leave. In Dohuk, we can't live a real life; there is corruption, no work, repression," the 23-year-old said.

The couple were among a disproportionate number of Iraqi migrants, most of them from Iraq's Kurdish region, who chose to sell their homes, cars and other belongings to pay off smugglers with the hope of reaching the European Union from the Belarusian capital of Minsk -- a curious statistic for an oil-rich region seen as the most stable in all of Iraq. But rising unemployment, endemic corruption and a recent economic crisis that slashed state salaries have undermined faith in a decent future for their autonomous region and kindled the desire in many to leave.

Iraqi Kurdistan is co-ruled by a two-party duopoly under two families that carved the region into zones of control -- the Barzanis in Irbil and Dohuk, and the Talabanis in Sulaymaniyah. This arrangement created relative security and prosperity, compared with the rest of Iraq, but it has been accompanied by nepotism and growing repression. Those downsides prompted would-be migrants to leave. Many were school dropouts, certain an education would not guarantee them work. Others were government employees and their families, no longer able to survive amid salary cuts.

Of the 430 Iraqis who returned from Minsk on a repatriation flight last week, 390 disembarked in the Kurdish region. Among them were Zaid and Delin Ramadan, now back living with Zaid's parents in Dohuk.

Like thousands of others, they had been lured to the European Union's doorstep by easy visas offered by Belarus. The EU has accused Belarus President Alexander Lukashenko of using asylum-seekers to retaliate for sanctions imposed after he claimed victory in a disputed 2020 election.

The migrants flocked to Belarus in hopes of getting into the EU. Most were from war-scarred Iraq and Syria. Smuggling networks appeared to be particularly efficient in Iraq's Kurdish area, where an economic crisis triggered by a crash in oil prices rendered the regional government insolvent.

Oil prices have rebounded, but the region relies on budget transfers from Iraq's federal government to pay public sector salaries. The payments have been intermittent because of disputes over the Kurdish region's independent oil export policy.

Thousands of students in Irbil and Sulaymaniyah have taken to the streets this week to protest lack of funding from the Kurdistan government. Dozens gathered in front of the KRG Ministry of Higher Education to demand stipend payments frozen for eight years.

Kurdish officials said Iraqi Kurds were lured to Belarus by traffickers with false promises of an easy journey. "This isn't a migrant issue but a criminal human trafficking issue," tweeted Masrour Barzani, prime minister of the Kurdistan Regional Government.

Migrants said they left by their own accord, desperate for a life with the dignity they couldn't find at home, and were not coerced by smugglers.

Determined to start over

Ramadan had dropped out of school in the 9th grade. At first his father, a teacher, and mother, a nurse, were against it. But they relented when Ramadan countered that his two older sisters were trained dentists in Dohuk and still unemployed.

He was never able to secure steady work. Since 2013, Ramadan has been a valet, waiter, construction worker and taxi driver. He never made more than $200 a month, barely enough for rent. In 2019 he volunteered as an ambulance driver, hoping in vain it would turn into a paid job.

The government is the main employer in the Kurdish region. Last year's austerity measures, including salary cuts of up to 21%, spurred protests and deepened disenchantment with the ruling class. The cutbacks were reversed in July, but the impact is still felt.

Young men often look to the peshmerga, the Kurdish branch of the Iraqi armed forces, for work. Ramadan tried but said he didn't have the right connections.

Over the last year, journalists, human rights activists and protesters who questioned or criticized actions by Kurdish authorities have faced intimidation, threats and harassment as well as arbitrary arrest, according to reports by the U.N. and Human Rights Watch. The Kurdish government has rejected allegations of systematic stifling of dissent. KRG officials say nepotism is a product of individuals abusing their power.

Ramadan said in the current repressive environment, he was too scared to speak up.

In October, after hearing about the Belarus route, Ramadan deposited $10,000 at a local money exchange office in Dohuk that had connections with a smuggler.

He and his wife were expecting their first baby, and he was determined to start over in Germany.

'My heart is broken'

As dawn broke, the car that would supposedly take them to Germany hadn't arrived, and Ramadan grew concerned.

He and his wife had walked along with 12 others through the soggy woods, crossing into Poland in search of a GPS point marked by the smuggler. Hours passed.

When the vehicle finally arrived, it was a minibus, not the small car they expected. Ramadan knew a larger vehicle would raise the suspicion of Polish authorities, but the migrants got in anyway, unable to withstand another day of cold.

A few kilometers down the road, they heard sirens. The minibus and his dreams came to a halt.

Ramadan and his wife, now five months pregnant, returned to Dohuk on last week's repatriation flight, his dream of an escape dashed.

"What can I say? My heart is broken. I am back where I started," he said.

Many other Iraqi asylum-seekers have decided to remain in Belarus, hoping they can somehow still cross into Poland. About 2,000 people are currently staying at a warehouse facility near the border.

Miran Abbas, 23, once a day laborer and former barbershop assistant, is among them.

His father, Abbas Abdulrahman, spoke to him via video call this week from the family home in Sulaymaniyah province.

"How's it going?" he asked the hollow-eyed face on the screen.

Abbas said food was running low and that Belarusian authorities had poured cold water over them to push them to cross into Poland.

But he won't return.

"How can I live in Kurdistan? I prefer to stay here even if they disrespect me thousands of times," he said.

He could not secure work in Kurdistan, his mother Shukriyeh Qadir said.

"So, he left because of his sufferings." 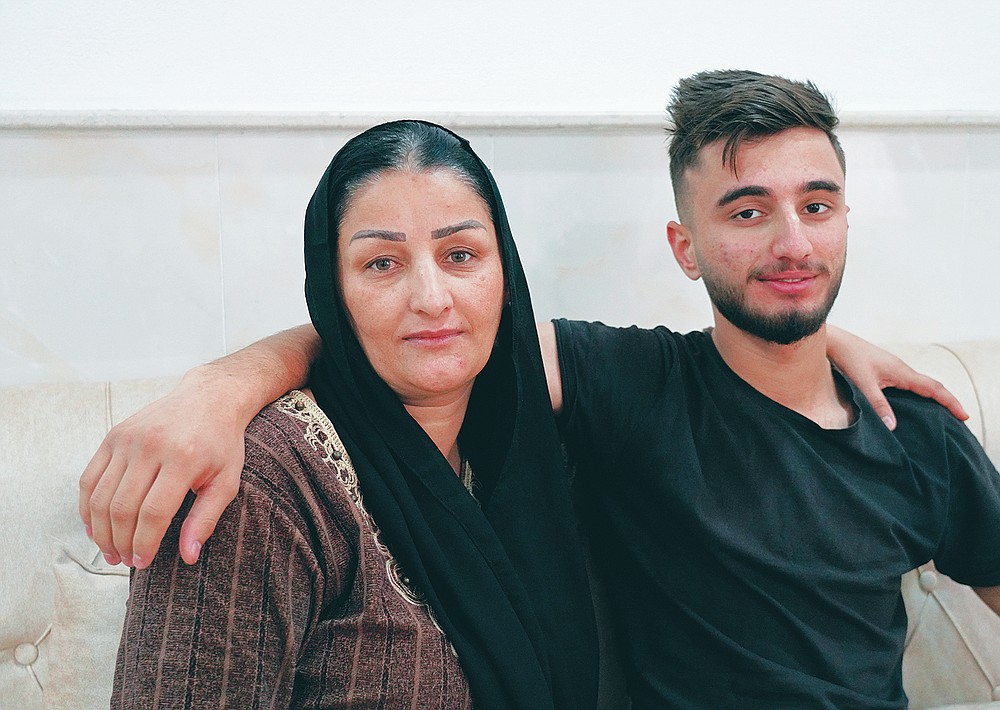 Sarkawt Selim, 19, who returned recently from Minsk after failing to cross the border into Poland, sits with his mother Adla, in their house in Dahuk, Iraq, Friday, Nov. 19, 2021. Rising unemployment, endemic corruption and a recent economic crisis that slashed state salaries have pushed Iraqi Kurds to sell their homes, cars and other belongings to pay off smugglers with the hope of reaching the European Union from the Belarusian capital of Minsk. (AP Photo/Rashid Yahya)