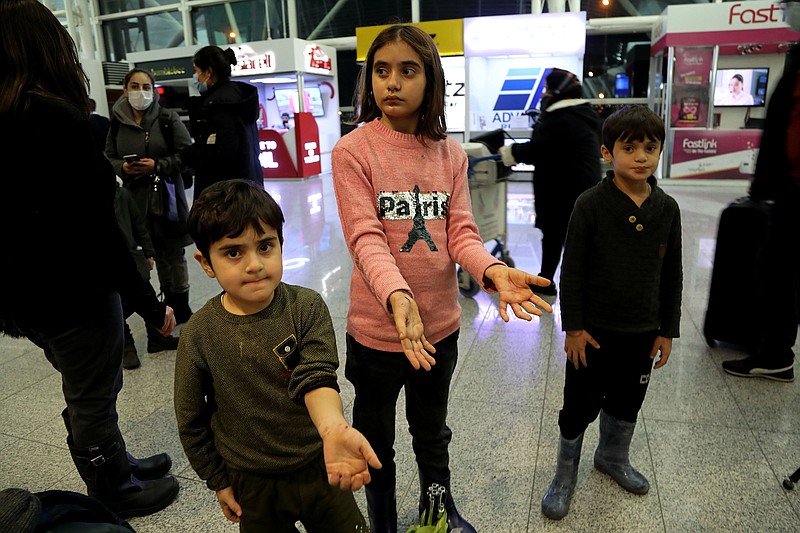 Children of the Iraqi migrants show hands with wounds and infections after arriving Friday at the airport in Irbil, Iraq. (AP/Hussein Ibrahim)

IRBIL, Iraq -- Iraq repatriated a second wave of more than 600 migrants from Belarus on Friday after they gave up, at least for now, on a disastrous attempt to try to reach the European Union via its eastern borders.

In Iraq, the transportation ministry said it had repatriated 608 people on two flights Friday and has now brought back a total of 1,038 Iraqis from the Belarusian capital, Minsk, after an initial evacuation flight Nov. 18. But it is not clear how many of the migrants remaining in Belarus will agree to leave voluntarily, with some saying they might want to stay after they borrowed thousands of dollars to pay smugglers to get there.

Iraq's foreign ministry said it has scheduled two more evacuation flights from Minsk on Friday night to Irbil and Baghdad, which would bring the total number of voluntary returnees to almost 2,000 people.

Thousands of Iraqis, many of them Kurds, have been caught up in a new migrant crisis in Europe. EU officials accuse Belarus of precipitating the crisis by loosening its visa rules in the summer and encouraging desperate asylum-seekers to go to the borders of the EU, then pushing them across in an attempt to punish the bloc for imposing sanctions on Alexander Lukashenko, the autocratic Belarusian president.

Lukashenko, who has led the country for three decades, threatened the EU in May to "flood" its member states with migrants after it imposed sanctions on him following the forced downing of a plane carrying a Belarusian dissident.

Once they reached Belarus, many of the migrants became stranded in the forests of the region without food, water or shelter from the cold. At times, they were thrust into dangerous confrontations as they tried to make it into Poland, Lithuania or Latvia, all members of the EU.

[Video not showing up above? Click here to watch » arkansasonline.com/1127erbil/]

Lukashenko told migrants at the Belarusian border with Poland on Friday that his country would help them go home if they wanted to but would not force them. Addressing them directly through an interpreter, he said Belarus would provide them with warm clothing and food if they chose to stay.

It was his first public appearance at the border since the start of the crisis. He visited a facility providing migrants with food and spoke to Red Cross workers at the camp.

Some migrants have reported being deported from Belarus against their will, including Iraqis sent to neighboring Syria.

The Iraqi migrants say they are desperate to escape a country where they do not see a future, where jobs are scarce and corruption is widespread. In the semi-autonomous Kurdish region, political and economic power is tightly held by two main political dynasties.

Up to 15,000 migrants remain in Belarus, the European Commission estimated Tuesday, with about 2,000 near the EU's borders, adjacent to Poland, Latvia and Lithuania.