Milestones piling up for Burks 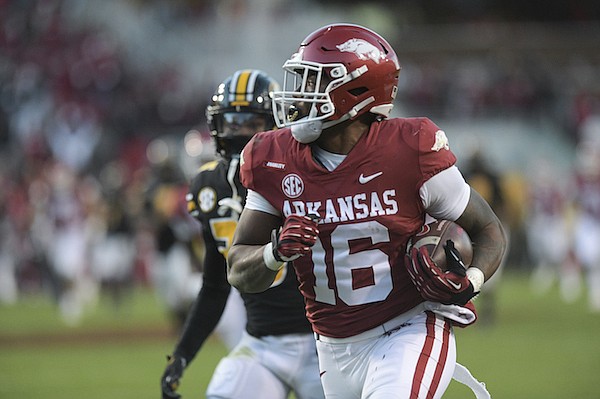 Arkansas wide receiver Treylon Burks outruns a Missouri defender to score a touchdown during the third quarter of the Razorbacks’ victory over the Tigers in Fayetteville.

The junior from Warren became the first University of Arkansas player to have six games in a season with 100 or more receiving yards 1,000 yards and the fourth with 1,000 or more yards in a season to help the Razorbacks beat Missouri 34-17.

Burks passed the 1,000-yard milestone with a 43-yard gain on a pass from KJ Jefferson in the second quarter. The play to the Missouri 7 set up Raheim Sanders 1-yard touchdown run that gave the Razorbacks a 10-3 lead.

"I really don't think about it that much," Burks said of adding to his totals. "I just want to go out there for my team and get a good win at the bowl."

Arkansas defensive coordinator Barry Odom celebrated his 45th birthday with a victory over his alma mater and former employer.

Odom was a linebacker at Missouri from 1996-99 and held a variety of jobs on Gary Pinkel's staff, including defensive coordinator from 2012-14 before replacing Pinkel as the Tigers' head coach in 2015.

Odom was fired after the 2019 season after leading Missouri to a 25-25 record, including 4-0 against Arkansas.

"I want to say I'm very happy for Coach Odom," Arkansas Coach Sam Pittman said. "I don't really want to talk about the situation [his firing at Missouri], but I am very, very happy for him and our football team."

Pittman said he gave a game ball to linebacker Grant Morgan and safety Joe Foucha and asked them to present it to Odom, which they did.

"They stood up and talked about what Coach Odom means to them, and certainly we did give him the game ball," Pittman said. "He deserved it."

Friday's victory had to be especially satisfying for Odom after Missouri beat Arkansas 50-48 last season on a field goal on the game's final play.

"I'm very happy for Coach Odom," senior linebacker Hayden Henry said. "I said in [interviews] this week that's he's a stone-cold killer and he's the spear of our team -- the tip of the spear.

Arkansas ended its losing streak to Missouri at five games with the help of two former Tigers.

Defensive linemen Markell Utsey and Tre Williams, who came to Arkansas as graduate transfers this season from Missouri, finished their careers undefeated in the series at 11-0.

Utsey, a sixth-year senior from Little Rock Parkview, is 6-0 in the series, including 5-0 with Missouri and 1-0 with Arkansas.

Williams, who is from Columbia, Mo., is 5-0, including 4-0 with his hometown Tigers and 1-0 with the Razorbacks.

Utsey and Williams each had two tackles on Friday.

Montaric Brown, Arkansas' senior cornerback from Ashdown, got his fifth interception of the season when he picked off Connor Bazelak in the third quarter.

Brown also had interceptions against Rice, Texas A&M, Auburn and LSU. His interception at LSU in overtime set up the Razorbacks' game-winning field goal.

Missouri Senior running back Tyler Badie rushed a career-high 41 ties for 219 yards against the Razorbacks and in the process set the Tigers' single-season record with 1,604 yards. He broke the previous mark of 1,578 rushing yards by Devin West in 1998.

"He's a great competitor," Missouri Coach Eli Drinkwitz said of Badie. "He gives us everything he's got and for him to get that record, that's a special thing.

"I know he'll be disappointed in the result today, but I know he gave us everything he had."

Badie is one of three finalists for the Doak Walker Award, which goes to the nation's top running back.

Warren had two catches for 63 yards and also had a 32-yard run. He had season-highs of 7 catches for 67 yards against Georgia Southern and 3 for 51 against Arkansas-Pine Bluff, but prior to Friday his best game against an SEC opponent had been 1 for 12 at Ole Miss.

"I was really happy for him, especially because he came back as a super senior," Arkansas Coach Sam Pittman said. "To end that way out there with a win and have a good game, he looked really good today."

Normally when a player is called for grabbing an opponent's facemask, it's the defense making a tackle on a ball carrier.

But the opposite occurred when Missouri running back Tyler Badie drew a flag for grabbing the face mask of Arkansas safety Myles Slusher with 4:04 left in the second quarter.

Slusher forced Badie out of bounds, and Badie grabbed his face mask and slung him to the ground for a 15-yard penalty

Bannister had one catch for 13 yards and Byers made one tackle.

Arkansas cornerback Hudson Clark was back in the starting lineup after missing last week's game at Alabama because of a concussion he sustained in the Razorbacks' 16-13 overtime victory at LSU two weeks ago.

During a pregame ceremony, Arkansas' seniors and their families stretched from one end of the field to the other.

The Razorbacks honored 29 seniors, some of whom -- including linebacker Bumper Pool and cornerback Montaric Brown -- have the option to return next season because of the extra year that was granted all players in 2020 by the NCAA because of the coronavirus pandemic.

Dallas Cowboys owner Jerry Jones was honored on the field during a timeout in the first half for his induction earlier this fall into the Cotton Bowl Hall of Fame.

Jones was a senior offensive lineman on Arkansas' 1964 team that capped an 11-0 season by beating Nebraska 10-7 in the Cotton Bowl on Jan. 1, 1965, and won a share of the national championship.

Jones also built AT&T Stadium in Arlington, Texas, which now is home to the Cotton Bowl as well as his Cowboys.

SEC West teams finished 10-4 against the East this season thanks to the Razorbacks' victory over Missouri.

SEC Commissioner Greg Sankey attended the Arkansas-Missouri game as part of his tour around the conference during the Thanksgiving holiday weekend.

Sankey was in Starkville, Miss., on Thursday night for the Egg Bowl when Ole Miss beat Mississippi State 31-21. He'll be in Auburn, Ala., for today's Iron Bowl when Auburn plays Alabama.

Representatives of the Liberty Bowl attended the game. They attended Arkansas Coach Sam Pittman's postgame news conference and talked briefly with him.