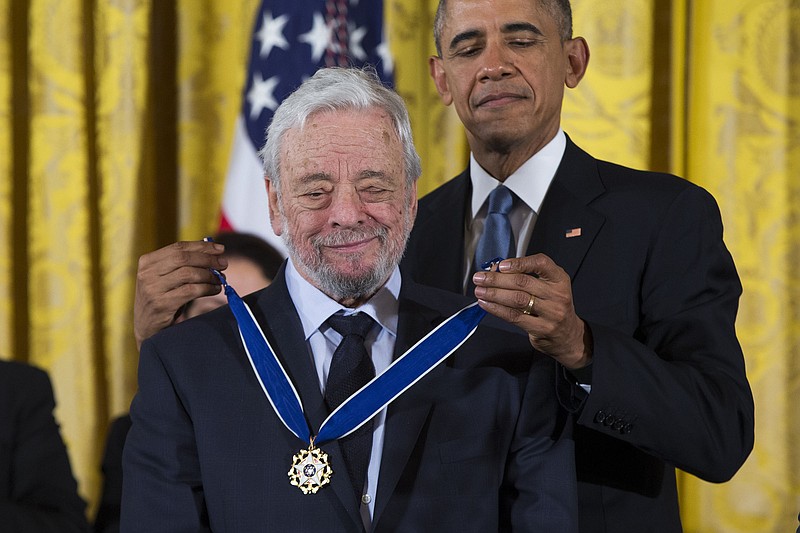 NEW YORK -- Stephen Sondheim, the songwriter who reshaped the American musical theater in the second half of the 20th century with his intelligent, intricately rhymed lyrics, his use of evocative melodies and his willingness to tackle unusual subjects, has died. He was 91.

Sondheim influenced several generations of theater songwriters, particularly with such landmark musicals as "Company," "Follies" and "Sweeney Todd," which are considered among his best works. His most famous ballad, "Send in the Clowns," has been recorded hundreds of times, notably by Frank Sinatra and Judy Collins.

The artist refused to repeat himself, finding inspiration for his shows in such diverse subjects as an Ingmar Bergman movie ("A Little Night Music"), the opening of Japan to the West ("Pacific Overtures"), French painter Georges Seurat ("Sunday in the Park With George"), Grimm's fairy tales ("Into the Woods") and even the killers of American presidents ("Assassins").

Tributes quickly flooded social media as performers and writers saluted a giant of the theater. "We shall be singing your songs forever," wrote Lea Salonga. Aaron Tveit wrote: "We are so lucky to have what you've given the world."

Six of Sondheim's musicals won Tony Awards for best score, and he also received a Pulitzer Prize ("Sunday in the Park"), an Academy Award (for the song "Sooner or Later" from the film "Dick Tracy"), five Olivier Awards and the Presidential Medal of Honor. In 2008, he received a Tony Award for lifetime achievement.

Sondheim's music and lyrics gave his shows a dark, dramatic edge. He was sometimes criticized as a composer of unhummable songs, a badge that didn't bother him.

To theater fans, Sondheim's sophistication and brilliance made him an icon. A Broadway theater was named after him. A New York magazine cover asked "Is Sondheim God?" The Guardian newspaper once offered this question: "Is Stephen Sondheim the Shakespeare of musical theatre?"

A supreme wordsmith -- and an avid player of word games -- Sondheim's joy of language shone through. "The opposite of left is right/The opposite of right is wrong/So anyone who's left is wrong, right?" he wrote in "Anyone Can Whistle." In "Company," he penned the lines: "Good things get better/Bad gets worse/Wait -- I think I meant that in reverse."

He offered the three principles necessary for a songwriter in his first volume of collected lyrics -- Content Dictates Form, Less Is More and God Is in the Details. All these truisms, he wrote, were "in the service of Clarity, without which nothing else matters." Together they led to stunning lines like: "It's a very short road from the pinch and the punch to the paunch and the pouch and the pension."

Taught by Oscar Hammerstein, Sondheim pushed the musical into a darker, richer and more intellectual place. "If you think of a theater lyric as a short story, as I do, then every line has the weight of a paragraph," he wrote in his 2010 book, "Finishing the Hat," the first volume of his collection of lyrics and comments.

Early in his career, Sondheim wrote the lyrics for two shows considered to be classics of the American stage, "West Side Story" (1957) and "Gypsy" (1959). "West Side Story," with music by Leonard Bernstein, transplanted Shakespeare's "Romeo and Juliet" to the streets and gangs of modern-day New York. "Gypsy," with music by Jule Styne, told the backstage story of the ultimate stage mother and the daughter who grew up to be Gypsy Rose Lee.

It was not until 1962 that Sondheim wrote both music and lyrics for a Broadway show, and it turned out to be a smash -- the bawdy "A Funny Thing Happened on the Way to the Forum," starring Zero Mostel as a wily slave in ancient Rome yearning to be free.

It was "Company," which opened on Broadway in April 1970, that cemented Sondheim's reputation. The episodic adventures of a bachelor (played by Dean Jones) with an inability to commit to a relationship was hailed as capturing the obsessive nature of striving, self-centered New Yorkers. The show, produced and directed by Hal Prince, won Sondheim his first Tony for best score. "The Ladies Who Lunch" became a standard for Elaine Stritch.

Then, Sondheim wrote the score for "Follies," a look at the shattered hopes and disappointed dreams of women who had appeared in lavish Ziegfeld-style revues. The music and lyrics paid homage to great composers of the past such as Jerome Kern, Cole Porter and the Gershwins.

In 1973 came "A Little Night Music," starring Glynis Johns and Len Cariou. Based on Bergman's "Smiles of a Summer Night," this rueful romance of middle-age lovers contains the song "Send in the Clowns." A revival in 2009 starring Angela Lansbury and Catherine Zeta-Jones was nominated for a best-revival Tony.

In 1979, Sondheim and Prince collaborated on what many believe to be Sondheim's masterpiece, the bloody yet often darkly funny "Sweeney Todd." An ambitious work, it starred Cariou in the title role as a murderous barber whose customers end up in meat pies baked by Todd's willing accomplice, played by Angela Lansbury.

In September 2010, the Henry Miller Theatre was renamed the Stephen Sondheim Theatre. "I'm deeply embarrassed. I'm thrilled, but deeply embarrassed," he said as the sun fell over dozens of clapping admirers in Times Square. Then he revealed his perfectionist streak: "I've always hated my last name. It just doesn't sing." 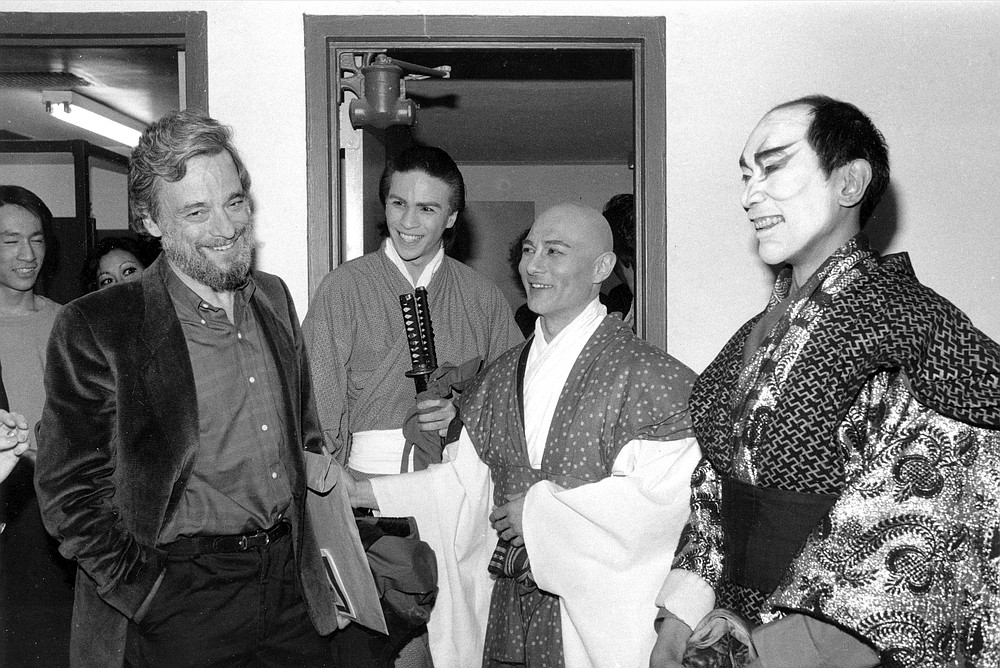 FILE - Composer-lyricist Stephen Sondheim, left, is shown with cast members of &amp;quot;Pacific Overtures&amp;quot; after the closing performance of the revival musical at New York&#x27;s Church of the Heavenly Rest at York Theater, Sunday, April 14, 1984. The actors are, from left, Kevin Gray, Ernest Ababa, and Tony Marino. Sondheim, the songwriter who reshaped the American musical theater in the second half of the 20th century, has died at age 91. Sondheim&#x27;s death was announced by his Texas-based attorney, Rick Pappas, who told The New York Times the composer died Friday, Nov. 26, 2021, at his home in Roxbury, Conn. (AP Photo, File)