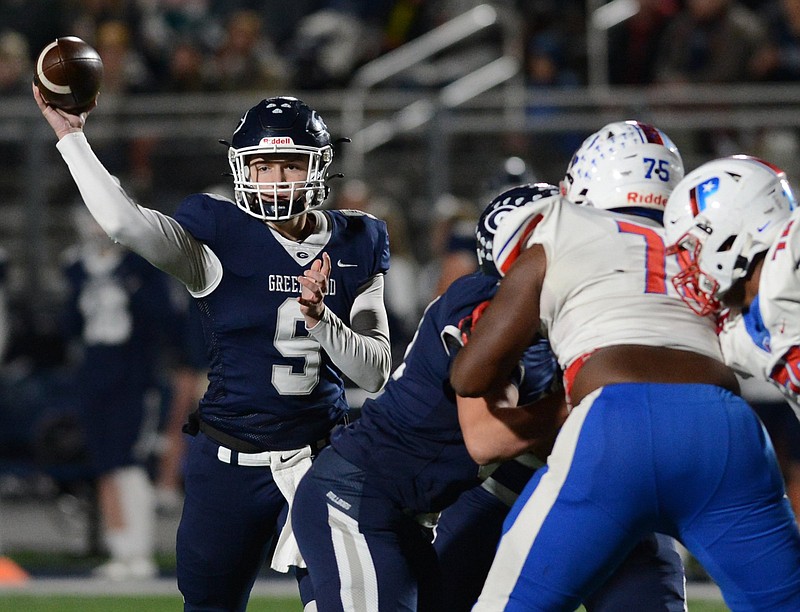 Greenwood quarterback Hunter Houston accounted for 5 touchdowns — 4 passing and 1 rushing — in the Bulldogs’ 45-35 victory over Little Rock Parkview on Friday night in the Class 6A semifinals at Smith-Robinson Stadium in Greenwood. More photos are available at arkansasonline.com/1127lrpghs/. (Special to the NWA Democrat-Gazette/Brian Sanderford)

GREENWOOD – The Greenwood Bulldogs were downright defensive with their offense on Friday night.

Greenwood's methodical offense limited Parkview to just seven plays in the second half and grabbed an extra possession with an early onside kick to take control in a 45-35 win at Smith-Robinson Stadium in the Class 6A semifinals.

Greenwood (9-3) improved to 15-6 in semifinal games and won its 49th straight game at home to earn a berth in the Class 6A championship game at War Memorial Stadium at noon on Saturday. Greenwood will play El Dorado, a 60-27 winner over Marion in the other semifinal.

Greenwood seized control of the game, mounting a 570-yard effort on a whopping 101 plays and 39 first downs on Friday -- but especially in the second half.

"How about that," Greenwood Coach Chris Young said. "We were able to drive the ball, make first downs and execute on third downs. We were really, really good in critical situations, offensively. That's how you win big ball games like this."

The Bulldogs took the second-half kickoff and coasted 79 yards in nine plays with Hunter Houston connecting with Aiden Kennon down the right sideline for a 32-yard touchdown with 9 minutes, 7 seconds left in the third quarter. Ben Moy booted Greenwood up, 34-21.

Senior defensive back Colin Daggett covered a surprise onside kick, and Greenwood added another score when Houston threw a 9-yard touchdown pass to Kennon on a slant with 6:34 left in the quarter for a 42-21 cushion.

"We thought if we could get up on them another score that they might drop their head a little bit," Young said. "They didn't."

Parkview (9-4) needed just six plays to answer with Darien Bennett scoring on a 7-yard run with 4:44 left in the quarter to trim Greenwood's lead to 42-28.

Parkview had just one offensive play the rest of the game.

After Parkview's score, Greenwood's offense chewed up the next nine minutes, 11 seconds on a 16-play, 79-yard drive. Moy capped the drive with a 27-yard field goal with 7:33 left in the game for a 45-28 cushion.

Parkview did score on its lone play of the fourth quarter with Parker Perry taking a screen pass and going 79 yards down the left sideline with 7:17 left that had the Patriots within, 45-35.

"You're going to give up big plays against great athletes," Young said. "That's what happened. Obviously, there's some stuff we have to clean up. I'm disappointed in the touchdowns we gave up late."

Greenwood ran out the clock with a 12-play drive, the last one with Houston taking a knee at the 11.

"Our guys respect them," Young said. "They whipped our tail the first time we played them. There's no talking around it, but our guys weren't scared. Greenwood kids aren't afraid to play anybody. They showed that."

Parkview grabbed a 21-7 lead after a quarter, taking the opening drive and scoring on a 24-yard jaunt by Willie Eackles to finish a 13-play drive.

Tayvion Haney halted Greenwood's opening drive with an interception, returning it 87 yards for a touchdown and a 14-0 lead with 4:06 left.

[Video not showing up above? Click here to watch » nwaonline.com/1127greenwood/]

Houston scored on a 2-yard run for Greenwood, but Parkview's Jaylon White threw a 77-yard touchdown pass to freshman Monterrio Elson with eight seconds left in the first quarter for a 21-7 lead.

Houston hit Bryce Caldwell with a 13-yard touchdown pass with 9:50 left in the second quarter, but the Bulldogs missed the extra point to leave Parkview's lead at 21-13.

Greenwood's defense forced a punt, and Javon Williamson carried the final three plays of a 12-play scoring drive and scored on a 27-yard run right up the middle with 5:26 left in the half to cut Parkview's lead to 21-20.

Landon Nelms intercepted a pass five plays later, and Greenwood took its first lead at 27-21 on Houston's 21-yard scoring toss to Kennon with 1:10 left in the half.

Parkview had 368 yards of offense, but 169 was on the first two drives and 79 was on the Patriot's final play. 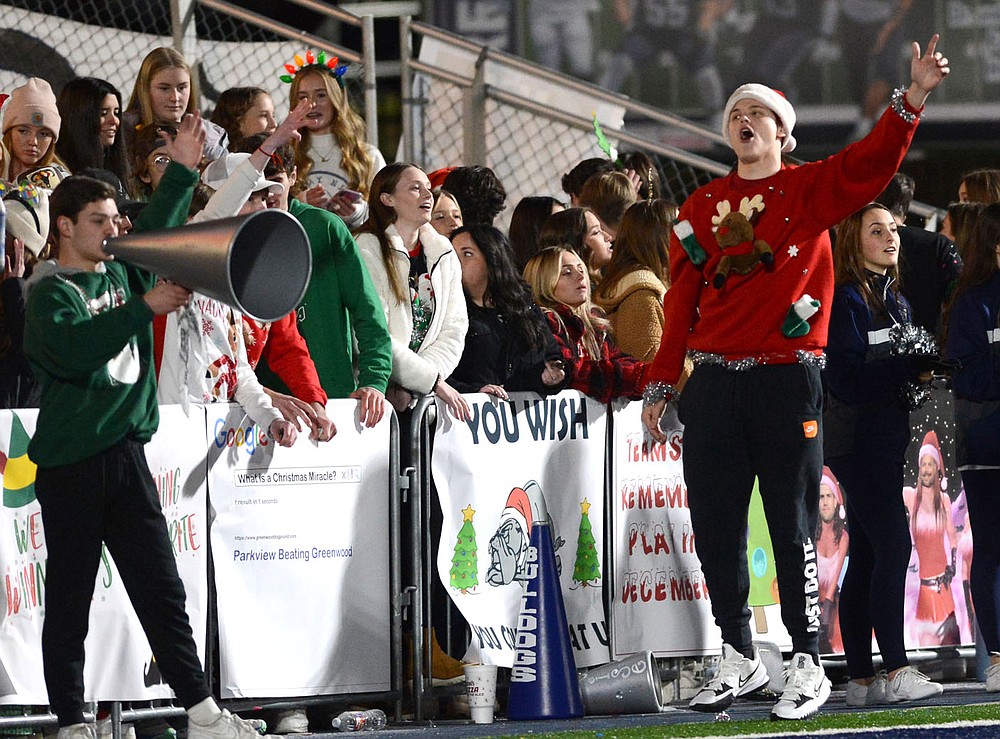 Greenwood students cheer on the Bulldogs during the second quarter against Parkview in Smith-Robinson Stadium on Friday, Nov. 26, 2021 in Greenwood. (Special to NWA Democrat Gazette/Brian Sanderford)

Print Headline: Greenwood plays keep-away in 2nd half against Parkview