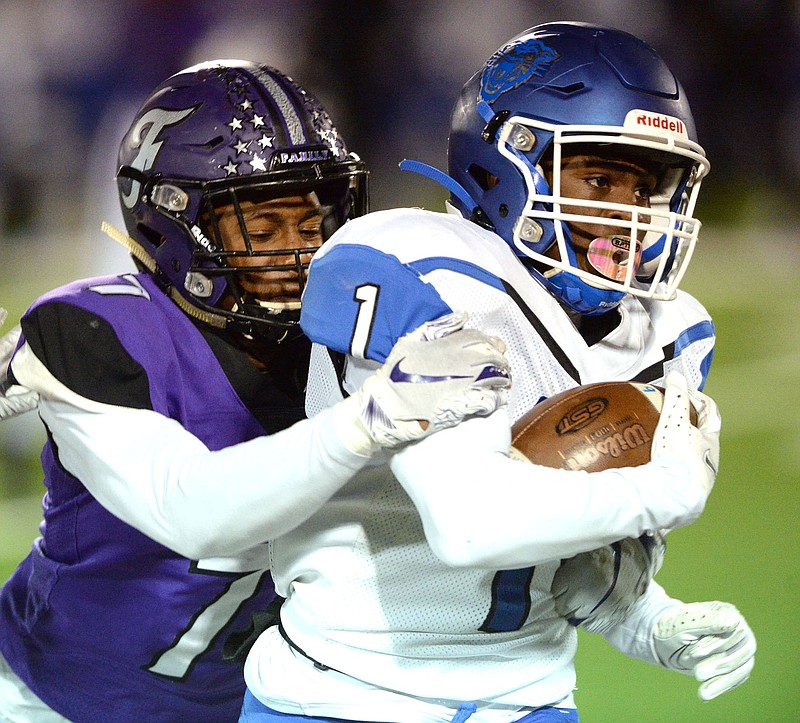 Fayetteville’s Braelon Palmer (7) tackles Conway receiver Manny Smith from behind Friday during the Bulldogs’ 29-21 victory over the Wampus Cats in the Class 7A state playoff semifinals at Harmon Field in Fayetteville. More photos at arkansasonline.com/1127chsfay/. (NWA Democrat-Gazette/Andy Shupe)

FAYETTEVILLE -- With a berth in the state championship game on the line, Fayetteville turned to its most inexperienced player to try and win Friday's Class 7A state semifinal game.

Graham Witte, who's been a member of the Bulldogs' team for fewer than 10 games, delivered the most clutch kick in recent team history.

Witte's line-drive 40-yard field goal cleared the uprights with just four seconds left on the clock, capping a frantic final drive and giving the Bulldogs a 23-21 lead. Fayetteville's Kaiden Turner returned a Conway lateral attempt on the last play of the game for 40 yards for a score to finalize the 29-21 win in Harmon Stadium.

"That was the one time that I could do it for them and I had to do," said Witte, who joined the team four weeks into the season and delivered the only made field goal for the team all season long. "I just did kickoffs until about last week and I did a couple of extra points, but that was my first field goal to make, and it felt good."

Fayetteville (10-2) will make its first state championship game appearance since winning back-to-back titles in 2015 and 2016. The Bulldogs will take on three-time defending state champion Bryant at 6:30 p.m. next Saturday at War Memorial Stadium in Little Rock.

Conway (9-3) appeared headed home with the win after rallying from a 20-7 halftime deficit to take a 21-20 lead in the fourth quarter. The Wampus Cats stopped a late Fayetteville drive and then drove inside the Bulldogs' 5-yard line with under two minutes left. Conway appeared to put the game out of reach when quarterback Donovyn Omola hit Manny Smith on a short touchdown pass, but the play was negated by a holding call.

With the ball moved back to the 20, Conway elected to go for it on fourth down and the Bulldogs held with a pass deflection in the end zone, giving the team a chance with 1 minute, 46 seconds left.

"We thought about a field goal at first, then we got that penalty and that pushed us back there and we didn't feel comfortable with it," said Conway Coach Keith Fimple. "So we ended up taking the ball back and giving it back to them. They had us in a position we were familiar with, they just made a play."

From his own 20-yard line and with no time-outs left, Bulldogs quarterback Bladen Fike calmly led his team down the field, scrambling for a pair of first downs and hitting several key passes including a clutch 10-yard strike to Isaiah Sategna on fourth down.

The Bulldogs moved to the Conway 20 as the clock ticked down to under 10 seconds after Fike spiked the ball. Facing fourth down and trailing 21-20 with the season on the line, Fayetteville Coach Casey Dick turned to Witte.

After a Conway timeout, Witte lined up at the Wampus Cats' 30. He walked back three steps and nodded and his right foot met solidly with the ball. When the end-over-end kick cleared the crossbar, the Fayetteville sideline erupted into bedlam.

"Blade was just calm, cool and collected," said Dick of his quarterback's game-winning drive. "We overcame some adversity tonight. How about our defense? They kept us in the game all night. Unbelievable. That's just playoff football."

The Bulldogs were in full control in the first half on offense and defense. Even when Fike was intercepted on his first pass attempt and the Wampus Cats returned it to the 8, the Bulldogs came through and Conway missed a short field goal.

[Video not showing up above? Click here to watch » nwaonline.com/1127fayetteville/]

Fayetteville then went 72 yards in just three plays with Fike hitting Jalen Blackburn for 56 yards, then 16 yards for the touchdown and a 7-0 lead.

The Bulldogs then scored on their next possession to go up 13-0, moving 70 yards. Fike hit Sategna for 23 yards to set up a short scoring hookup when Sategna went up over the defender to pull in Fike's scoring pass.

The Bulldogs went up three scores by driving 93 yards in 16 plays as Turner capped the march with a short touchdown run.

But Conway did not quit and the Wampus Cats fought back behind Boogie Carr, who rushed for 237 yards on 30 carries. Conway made it 20-7 at halftime and added two more scoring drives in the second half, the last a 73-yard drive with the big play a 48-yard pass from Omolo to Rome Fields that set up a 12-yard pass to Smith with 9:53 left.

Turnovers by each team prevented any scoring until the waning moments. Fike hit Dylan Kittle on a 50-yard pass, but Kittell was stripped of the ball at the Conway 12, and Omolo was intercepted by Fayetteville's Braelon Palmer. The Bulldogs also had a drive inside the Conway 10 thwarted on an intentional grounding penalty.

But with a berth in the state finals on the line, the Bulldogs' defense rose up to prevent a Conway score and gave the offense a chance.

Fike ended the night 29-of-46 passing for 455 yards and 2 touchdowns. Three Fayetteville receivers had over 100 yards receiving. Blackburn had 11 catches for 152 yards and 1 touchdown, Sategna had 8 catches for 137 yards, and Kittell finished with 7 catches for 122 yards. Sategna, the University of Arkansas commit, moved into the top 10 single-season leaders in receiving yards with 1,751 yards. 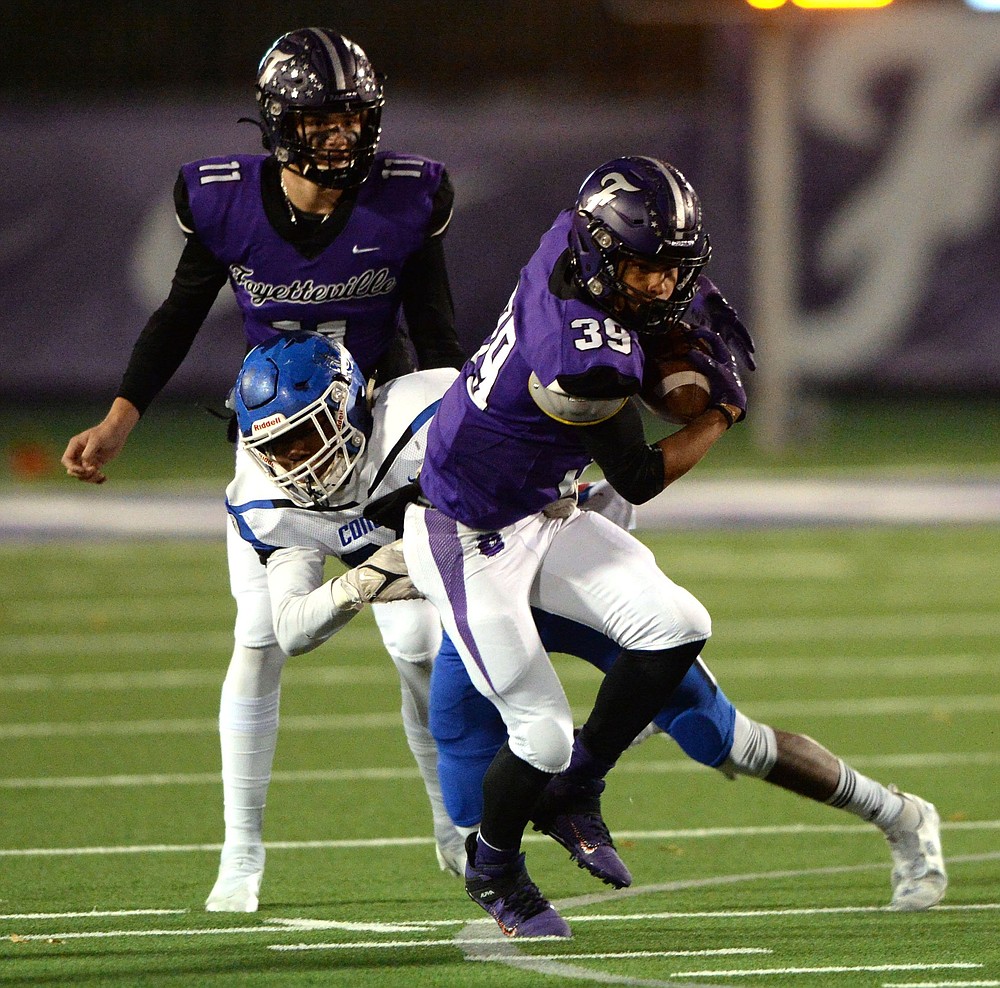 Fayetteville’s Christian Setzer (right) tries to fend off Conway linebacker Tavareun Williams as he attempts to make a tackle during the first half of a Class 7A playoff game Friday at Harmon Field in Fayetteville. More photos at arkansasonline.com/1127chsfay/ (NWA Democrat-Gazette/Andy Shupe)