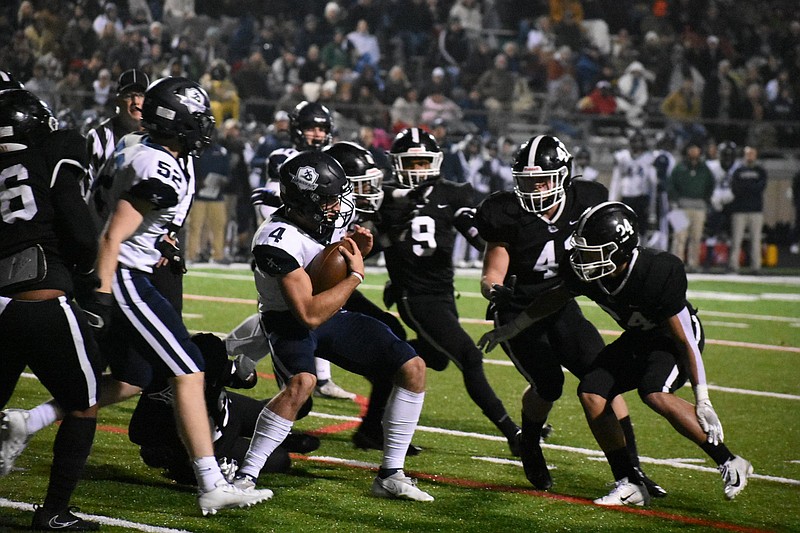 The two squads first met this season in early October, with White Hall pulling off a comeback to upset the Warriors. But after the first quarter of Friday's Class 5A state semifinal game, Bolding said the contest felt a little too familiar.

"We felt like we played really bad offensively the first go-round," the White Hall coach said. "And, after the first quarter, I thought 'Here we go again.' "

In their previous matchup, White Hall generated 248 yards of offense, barely eclipsing the century mark on the ground, with 105 yards. They were also down 10-0 at one point.

And after one quarter Friday, the Bulldogs were again down two scores, and they'd produced about 40 yards of offense. However, the Bulldogs rallied to beat Little Rock Christian 24-14, notching their first trip to the Class 5A championship game under Bolding.

"I've been to the finals when I was at Stuttgart and at Pine Bluff, and now here," Bolding said. "It always feels great. It's just an awesome feeling. And I couldn't be more proud of these kids."

White Hall will play Pulaski Academy for the 5A state championship next weekend in Little Rock.

White Hall (11-2) finished with 310 yards of offense, thanks largely to a considerable group effort on the ground. Three players -- Matthew Martinez, Zaire Green and Durran Cain -- accounted for all 248 of the Bulldogs' rushing yards. Martinez and Green had 93 yards apiece, and Cain rushed for another 62. Martinez and Green each had a rushing score.

Martinez, the Bulldogs' quarterback, also had an efficient night passing, hitting was 6 of 12 passes for 62 yards. He also tossed a touchdown pass -- an 18-yard jump ball to senior Steven Weston with 1:16 left in the first half to cut Little Rock Christian's lead in half.

"We got our stuff together, finally," Bolding said in reference to his offense. "[We] started executing and moving the ball."

White Hall's ability to control the clock was also vital. The Bulldogs' first scoring drive shaved 5:27 off the clock, giving Little Rock Christian the ball back with 1:16 left in the first half. But the most impressive White Hall drive came just after intermission. The Bulldogs milked 8:57 off the clock on a 17-play drive to open the second half.

The Bulldogs were also plus-2 in the turnover margin, which Warriors Coach Eric Cohu said was a crucial factor.

While Little Rock Christian (10-3) managed 286 yards of offense, it fumbled on its first drive of the night. Quarterback Walker White finished 10 of 19 passing for 115 yards, but -- much like the first matchup -- was intercepted twice. He also rushed for 90 yards on 13 carries and scored 2 touchdowns.