Witte comes through with pressure kick 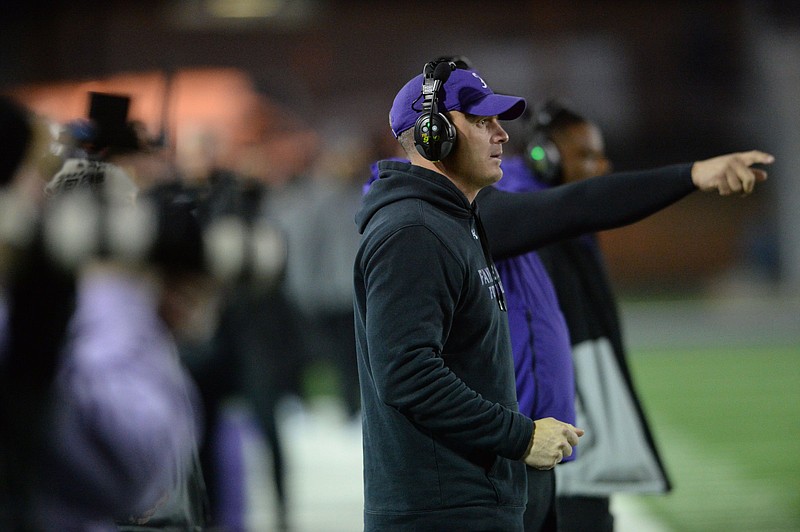 Fayetteville Coach Casey Dick said he never gave up on junior kicker Graham Witte, who made a 40-yard field goal with 4 seconds left to send the Bulldogs to the Class 7A state championship game with a victory over Conway on Friday in Fayetteville. (NWA Democrat-Gazette/Andy Shupe)

FAYETTEVILLE -- Fayetteville picked a good time for its first field goal of the season.

And it was made by a kicker who made the first field goal of his career.

Graham Witte kicked a 40-yard field goal with 4 seconds left to give Fayetteville a dramatic 29-21 victory over Conway Friday in a Class 7A semifinal game at Harmon Field. Witte sent a line drive kick that was just high enough over the crossbar to put Fayetteville ahead 23-21. The Bulldogs then added a touchdown when linebacker Kaiden Turner snatched a lateral by Conway on the final play and returned it for a score to set off a wild celebration from Fayetteville that spilled out onto the field.

Fayetteville (10-2) advanced to face Bryant in the championship game next Saturday at 6:30 p.m. at War Memorial Stadium in Little Rock.

Witte joined the team after the season began and became the kickoff guy before adding place-kicking duties after the starter left to join his club soccer team. Fayetteville Coach Casey Dick showed a lot of confidence in sending Witte out onto the field in such a pressure-packed situation with the game and a trip to Little Rock on the line.

Conway had a touchdown called back late in the game because of a penalty and Fayetteville intercepted on a deep throw into the end zone to end the threat. Senior quarterback Bladen Fike then drove Fayetteville downfield to set up the field goal by Witte, a junior who was mobbed afterwards by his teammates, his newest best friends.

"That was my first field goal to make and it felt good," said Witte, a three-sport athlete at Fayetteville. "That's us. We're dramatic. We're show business."

Fayetteville needed all the dramatics it could muster after Conway (9-2) overcame a 20-0 deficit to take a 21-20 lead over the Bulldogs in the fourth quarter. Fayetteville had a difficult time stopping Jamarion Carr, who carried 30 times for 237 yards. Sophomore quarterback Donovyn Omolo was also much-improved after beginning his varsity career in a 41-24 loss at Fayetteville on Aug. 27.

But Fayetteville generated enough offense behind Fike, who threw for 455 yards and two touchdowns. Sategna, Blackburn, and Dylan Kittell each had over 100 yards receiving.

Turner led another solid effort by the Fayetteville defender and he scored two touchdowns, starting with a 2-yard burst when he lined up in the backfield for the Bulldogs. Turner had a sack, batted a pass that fell incomplete and hurried Omolo most of the night despite being briefly sidelined with an injury late in the second quarter.

"We're relentless," Turner said. "We're going to go to the [Little] Rock and get us one."

Friday's dramatic win was just the latest for a Fayetteville team that won the 7A-West Conference championship. And the Bulldogs did it by putting their faith in a player who had never kicked a field goal in a game before.

"It was incredible," Turner said. "That's clutch and I'm super proud of him."