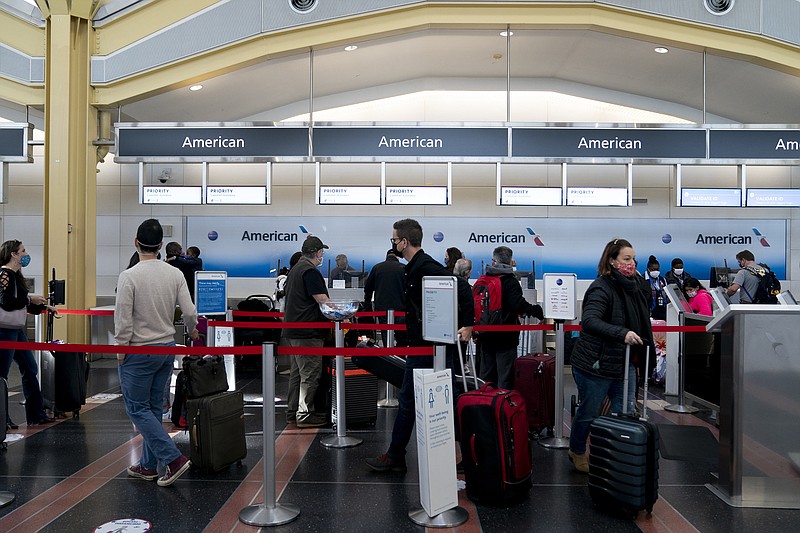 Travelers wait in line at an American Airlines kiosk at Reagan National Airport on Sunday. MUST CREDIT: photo for The Washington Post by Stefani Reynolds.

Airport parking lots and garages have been filling up around the country as a surge in holiday flying coincides with more people opting to drive rather than using transit or ride-hailing services during the pandemic.

At Reagan National Airport in Arlington, Va., one garage filled up recently, and earlier this month the airport came within a dozen parking spaces of being full. But Rob Yingling, a spokesman for the Metropolitan Washington Airports Authority, said passengers should find enough room to park, and he urged travelers can check availability online.

"Even if a facility displays 'full,' advance reservations will be honored there," he said.

Bustling parking facilities are one more way the aviation industry is feeling a strain during the busiest holiday travel season in nearly two years. It's also part of a shift seen in commuter preferences during the pandemic, as more people choose personal vehicles over sharing space with strangers on public transit or in a ride-sharing vehicle.

When far fewer people were flying early in the pandemic, airports closed economy lots and suffered steep drops in revenue from lost parking fees. Most lots have reopened, but not all, which contributed to challenges as millions of people headed out on Thanksgiving holiday trips.

Airport leaders say it's not sheer traveler volumes putting pressure on parking facilities, but also a shift in how people decide to get to the airport and the types of trips they take.

Stacey Sunday, a spokeswoman for Reno-Tahoe International Airport in Nevada, said people are taking extended excursions while working remotely, leaving cars parked for longer than in the past. After the airport's lots filled up in the summer, managers developed contingency plans for the holidays that include the use of 700 additional spots outside the airport, while also organizing shuttle buses.

"It is expensive to invest in these shuttles and the drivers, but putting our passengers first, it's worth it," Sunday said.

For passengers eager to see family during the holidays -- many for the first time in months -- finding somewhere to park is one more hurdle to navigate.

Patrick Koro, 27, planned to leave an extra 90 minutes to find a parking spot when he flew from Dallas-Fort Worth International Airport to San Diego last week. The options online were listed as "sold out," and Koro said he didn't have prospects for getting to the airport other than driving.

"It leaves you a little bit hanging," he said. "When you show up, you want to have an option to park."

While many large airports have vast economy lots, difficulty retaining shuttle bus drivers could cause headaches even after finding a spot.

Jonathan Dean, a spokesman for Baltimore-Washington International Marshall Airport, said the airport's 23,000 parking spaces were likely to be plenty during Thanksgiving week. But, he said, passengers using shuttles to get to the terminal "may experience occasional service delays during peak periods throughout the holiday season due to the nationwide driver shortages."

At Phoenix-Mesa Gateway Airport, managers closed lots early in the pandemic only to see demand at the leisure-dominated airport rebound this year. Ryan Smith, an airport spokesman, said the lot closest to the terminal regularly filled up this summer, recording some of its highest passenger volumes.

When that lot fills up, passengers are directed to economy parking and can take a shuttle to the terminal. But over the summer, Smith said, finding bus drivers was a challenge.

"One day, we ended up having airport staff manage some shuttle buses because we had a couple guys just walk out and find better opportunities," he said.

For a smaller airport that competes on convenience and uses the marketing tagline "just plain easy," reliable parking is especially important, Smith said.

"That's why people use us, and we need to make sure that we're not falling down," he said.

The airport has opened a new cellphone lot to try to ease congestion and turned the old lot into employee parking, freeing more spots near the terminal for passengers. But despite the changes, the terminal lot filled up during a recent weekend.

"We're fairly confident at some point today it will fill, and it will basically be full throughout the holiday," Ryan said Tuesday.

At Seattle-Tacoma International Airport, the facility is facing a combination of factors: more people choosing to drive, some spots still closed because of the pandemic, and a shortage of bus drivers. The airport this month touted new light-rail stations as a better alternative.

"This holiday season, start your travel on the right note," Sound Transit Board Chairman Kent Keel said in a statement. "Avoid the hassle of traffic and search for parking. Choose the reliable and affordable option to get to the airport. Ride Link light rail."

In Texas, Koro said he considered parking near a rail line and taking the train, but he decided that would have created headaches of its own. His strategy instead was to hope for the best when it came to finding a spot.