Bruins make most of time off, trounce Rebels 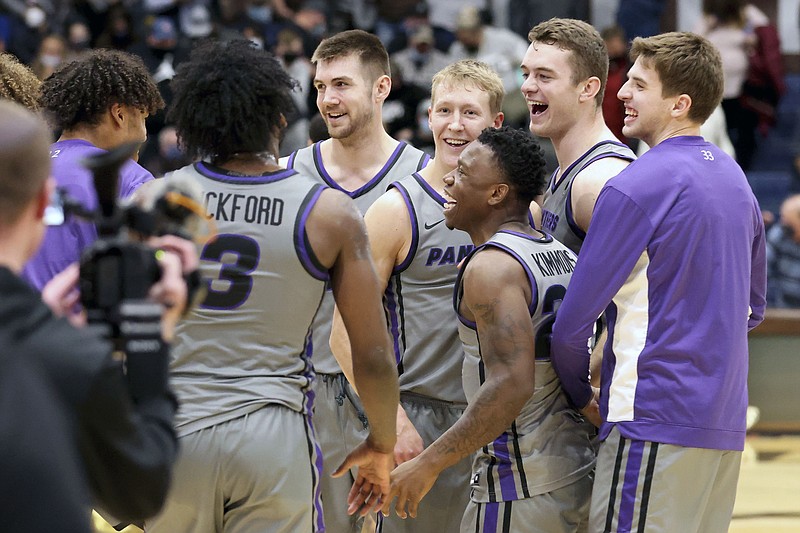 LAS VEGAS -- The UCLA Bruins had three days off in Las Vegas to think about how they were going to rebound from losing to No. 1 Gonzaga by 20 points.

No. 2 UCLA wasted no time on Saturday, scoring 14 unanswered points early in the first half to beat UNLV 73-51.

"We had a lot to think about after our last game," said Jules Bernard, who led UCLA with 18 points and had 2 blocks, 4 assists and 4 rebounds. "We had a day off and went right back to practice. That pace we put into practice is what he put into the game."

The Bruins (6-1) shot 47% from the floor and from three-point range. Tyger Campbell had 15 points and Johnny Juzang and Jaime Jaquez each added 12 points each.

"I'm really happy with our effort and our attitude," UCLA Coach Mike Cronin said. "I told them, I really don't care about wins and losses, it's about effort and attitude. I told them we have to do whatever we have to do to win a tough road game and it starts with defense."

Bryce Hamilton led UNLV (4-3) with 15 points, while Donovan Williams added 12 points. The Rebels struggled from the floor, finishing at 30%.

"We got in a hole and took a lot of three-point shots," said UNLV Coach Kevin Kruger, whose team went 22% (6 of 27) from three-point range. "I think a lot of the shots were right there. There were a lot of drives where we were one (pass) away from finding a better shot. I don't want to think the sky is falling, it is UCLA."

"We really worked on rebounding in practice," Bernard said. "When the shot goes up, crashing the boards. What we did in practice is really a reflection of what happened today."

The Rebels scored the first two points of the game, but the Bruins went on a 14-0 run and never trailed again. UNLV cut the lead to 22-19 before UCLA led 37-22 at halftime.

"I told them at halftime, 'When you're on the road, teams play with pride, they are going to play you with pressure,' " Cronin said. "We came out ready in the second half. UNLV is a team that is fast and athletic."

OLEAN, N.Y. -- AJ Green scored 35 points with four assists to lead Northern Iowa to a win over No. 16 St. Bonaventure.

Austin Phyfe and Nate Heise each had 15 points as the Panthers (2-3) beat a ranked opponent for the first time since 2019 at then-No. 23 Colorado.

Green did most of his damage from 3-point territory, making a career-best 9 of 15, to match his career high for scoring. The preseason player of the year in the Missouri Valley Conference was 8 of 28 from long range in Northern Iowa's first four games.

The Wildcats (6-0) had a huge size advantage and exploited it, overpowering the Hornets with 29 points in the paint. Arizona had 31 assists on 38 field goals, including nine by Kerr Kriisa, and shot 55%.

Koloko also had seven rebounds, two steals and a blocked shot but left early in the second half with a sprained ankle.

Sacramento State (3-3) fell into a big hole early and never recovered, losing its second lopsided game to a Pac-12 opponent this season. Cameron Wilbon had 14 points to lead the Hornets, who shot 36%.

SALT LAKE CITY -- Te'Jon Lucas scored a season-high 18 points to lead No. 18 BYU to a win over Utah, keeping the Cougars undefeated.

Alex Barcello had 17 points, most of them coming late in the game as he controlled the ball and went 11-for-12 from the free throw line. Gavin Baxter scored a season-high 14 points and Caleb Lohner added 10 points and 12 rebounds for BYU (6-0).

Brendan Carlson had 17 points and Rollie Worster had 13 for the Utes (5-1), who suffered their first defeat of the season after five consecutive wins under new Coach Craig Smith.

The Cougars outrebounded the Utes 45-28 and had a 48-28 scoring advantage in the paint.

Still, the Utes were scrappy and stayed within striking distance until the final minutes, when their inability to grab a rebound clinched the game.

The Utes cut the lead to six several times but the Cougars always had an answer, shooting 56% from the floor in the second half that included a number of layups and dunks.

Utah sprinted to a 7-0 lead in the first and led 29-27 at the half, led by Stefonovic's eight points. Both teams played high-pressure, intense defense. Open shots were few and many attempts came late in the shot clock.

Early in the game, Ute senior big man Dusan Mahorcic left the game with an apparent knee injury, and that was after leading rebounder Marco Anthony was ruled out before tipoff with a sprained ankle.

Utah hadn't lost to BYU on their home court since 2011.

Print Headline: Bruins make most of time off, trounce Rebels