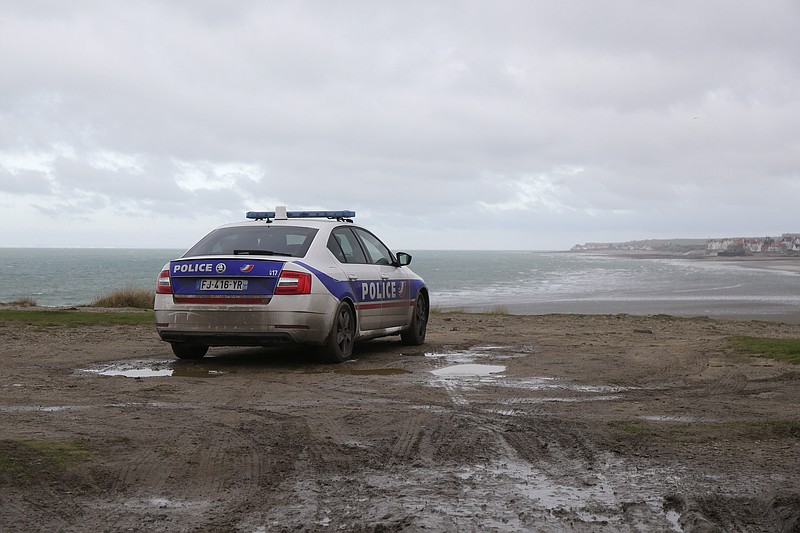 FILE- A police car parks over the shore in Wimereux, northern France, Thursday, Nov. 25, 2021 in Calais, northern France. The price to cross the English Channel varies according to the network of smugglers, between 3,000 and 7,000 euros. Often, the fee also includes a very short-term tent rental in the windy dunes of northern France and food cooked over fires that sputter in the rain that falls for more than half the month of November in the Calais region. (AP Photo/Michel Spingler, File)

CALAIS, France -- The price to cross the English Channel varies according to the network of smugglers, between 3,000 and 7,000 euros.

Often, the fee also includes a short-term tent rental in the windy dunes of northern France and food cooked over fires that sputter in the rain that falls for more than half the month of November in the Calais region. Sometimes, but not always, it includes a life vest and fuel for the outboard motor.

And the people who collect the money -- up to $432,000 per boat that makes it across the narrows of the Channel -- are not the ones arrested in the periodic raids along the coastline. They are just what French police call "the little hands."

Now, French authorities are hoping to move up the chain of command. The French judicial investigation into Wednesday's sinking that killed 27 people has been turned over to Paris-based prosecutors who specialize in organized crime.

To cross the 20-mile narrow point of the Channel, the rubber dinghies must navigate frigid waters and passing cargo ships. As of Nov. 17, 23,000 people had crossed successfully, according to Britain's Home Office. France intercepted about 19,000 people.

At a minimum, then, smuggling organizations this year have netted 69 million euros for the crossing -- that's 2 million euros per kilometer.

"This has become so profitable for criminals that it's going to take a phenomenal amount of effort to shift it," the U.K. Home Office's Dan O'Mahoney told Parliament on Nov. 17.

Frontex, the European border agency, described in a 2021 risk report the operational leaders as managers who "are able to orchestrate the criminal business from a distance, while mostly exposing low-level criminals involved in transport and logistics to law enforcement detection."

The chain starts in the home country, usually with an agreed-upon price, arranged over social media.

That fee tends to shift over the journey, but most willingly pay extra as their destination grows closer, said Mimi Vu, an expert on Vietnamese migration who regularly spends time in the camps of northern France. That's precisely when the logistics grow more complicated.

Channel crossings by sea were relatively rare until a few years ago, when French and British authorities locked down the area around the Eurotunnel entrance. The deaths of 39 Vietnamese migrants in the back of a container truck may also have contributed to a new reluctance to use that route.

But the first attempts were disorganized, using small inflatables and even kayaks bought at the local Decathlon sports store.

Police cracked down on local boat purchases, and the larger inflatables started to show up, hauled by the dozens inside cars and vans with German and Belgian tags, police said. France's interior minister, Gérald Darmanin, said a car with German tags was seized in connection with the investigation.

Police raids on the camps to pull down tents and disrupt operations have given smugglers yet another chance to make money, said Nikolai Posner of the aid group Utopia 56. Now, the fee includes a short-term tent rental and access to basic food, usually cooked over an open fire.

"There is one solution to stop all this, the deaths, the smugglers, the camps. Make a humanitarian corridor," said Posner.

He said asylum requests should be easier on both sides of the Channel.

In part because of Brexit and coronavirus, expulsions from the U.K. this year dropped to just five people, according to the Home Office. Vu said people who are intercepted at sea or land by British border forces end up in migrant centers, but usually just get back in touch with the smuggling networks and end up working black market jobs.

That's the complaint in France, where the interior minister said British employers appear more than happy to hire under the table, providing yet another financial incentive.

"If they're in Calais, it's to get to Britain, and the only people who can guarantee them passage are these networks of smugglers," said Ludovic Hochart, a Calais-based police officer with the Alliance union. "The motivation to get to England is stronger than the dangers that await."

On Sunday ministers from France, Germany, the Netherlands, Belgium and EU officials will meet to search for solutions. But, with France and Britain at sharp odds over migration, fishing and how to rebuild a working relationship after Brexit, there is one notable absence: a British delegation.

For Vu, that's a missed opportunity: "This is transnational crime. It spans many borders and it's not up to only one country to solve it." 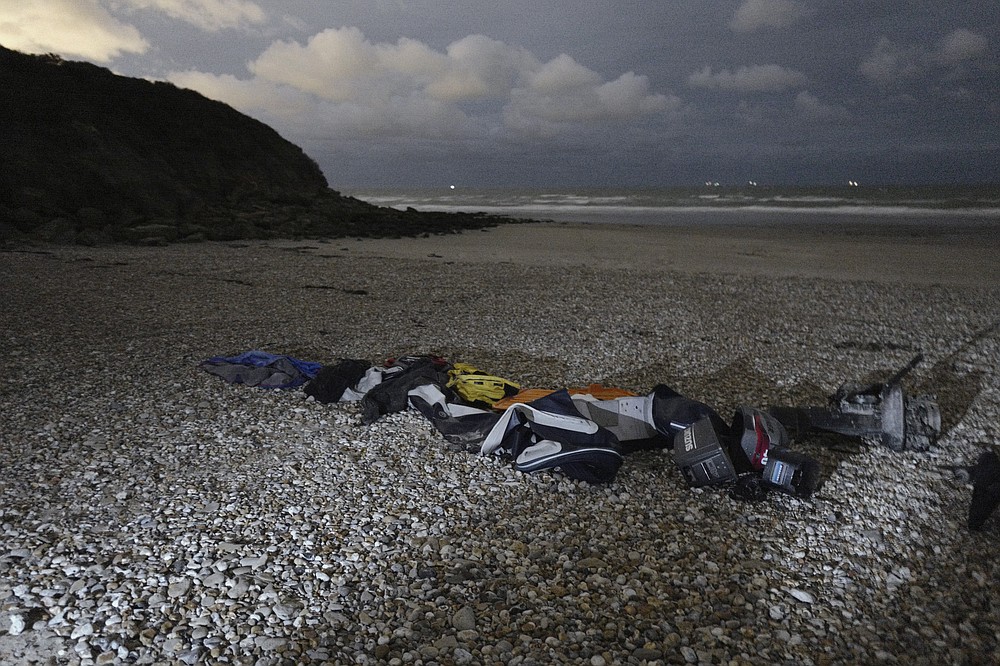 FILE- Life jackets, sleeping bags and damaged inflatable small boat are pictured on the shore in Wimereux, northern France, Friday, Nov. 26, 2021 in Calais, northern France. The price to cross the English Channel varies according to the network of smugglers, between 3,000 and 7,000 euros. Often, the fee also includes a very short-term tent rental in the windy dunes of northern France and food cooked over fires that sputter in the rain that falls for more than half the month of November in the Calais region. (AP Photo/Rafael Yaghobzadeh, File)