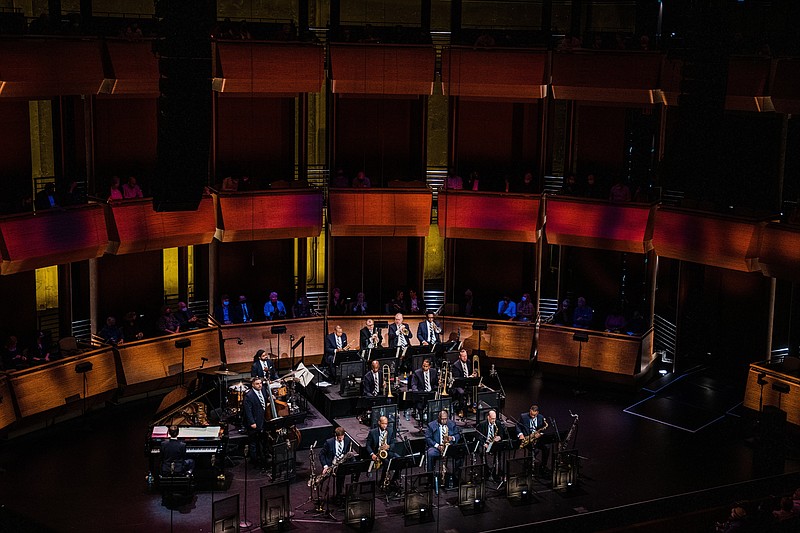 The Jazz at Lincoln Center Orchestra performs during the “Wynton at 60” program in New York on Nov. 18. The Jazz at Lincoln Center Orchestra returned to indoor performances with the program, which featured Marsalis originals and a quartet of up-and-coming trumpeters — Summer Camargo, Giveton Gelin, Tatum Greenblatt and Anthony Hervey. (The New York Times/Gabriela Bhaskar)

NEW YORK — The Jazz at Lincoln Center Orchestra was amused as four trumpet players, all under the age of 30, took their position in the rehearsal room Nov. 16.

"It's the Young Lions!" called out baritone saxophone player Paul Nedzela, referring to the coterie of sharp-dressed, tradition-minded bop up-and-comers who rose during the Reagan and Clinton administrations while edging jazz toward a concert art with a classical music-style repertoire.

That got a laugh.

"We tried that in the '90s," said bassist Carlos Henriquez.

Soon, Wynton Marsalis, once the pride of those young lions, called the band to order from his perch in the trumpet section. The orchestra lit into "Windjammers," a Marsalis cooker arranged to showcase the quartet of guest trumpeters, some of them students. The four swapped bars, breaks and occasionally expressions of wonderment, as if they couldn't believe they were — to borrow a title from Marsalis' own repertoire — in this house, on this morning.

The occasion: the Nov. 18 kickoff to Jazz at Lincoln Center's 34th concert season — and the Jazz at Lincoln Center Orchestra's first indoor New York performance since the covid-19 shutdowns. The season will include a tribute to Chick Corea, who died in February; a celebration of the centennial of Charles Mingus; and three concerts showcasing extraordinary female singers Dianne Reeves, Catherine Russell and Cecile McLorin Salvant.

Excitement about the reopening pulsed through the band.

"To look at and see our audience, and to feel that energy, I'm going to be overwhelmed," said Ted Nash, a saxophonist and composer. "We've been doing all this virtual stuff, but to create together a sound field and an energy field in person, where all the sounds meld together, this is why I do this."

Marsalis was quick to say he didn't name the weekend's concerts — "Wynton at 60" — which celebrate his new status as a sexagenarian with a program of his originals from four decades.

Still, despite a warm, even gentle demeanor, there was no doubt he was in charge, announcing the order of soloists at rehearsal or tweaks to the charts. But when a soloist occasionally asked how to approach a section, he replied, "Just do what you all want." Or, "It's you playing it." 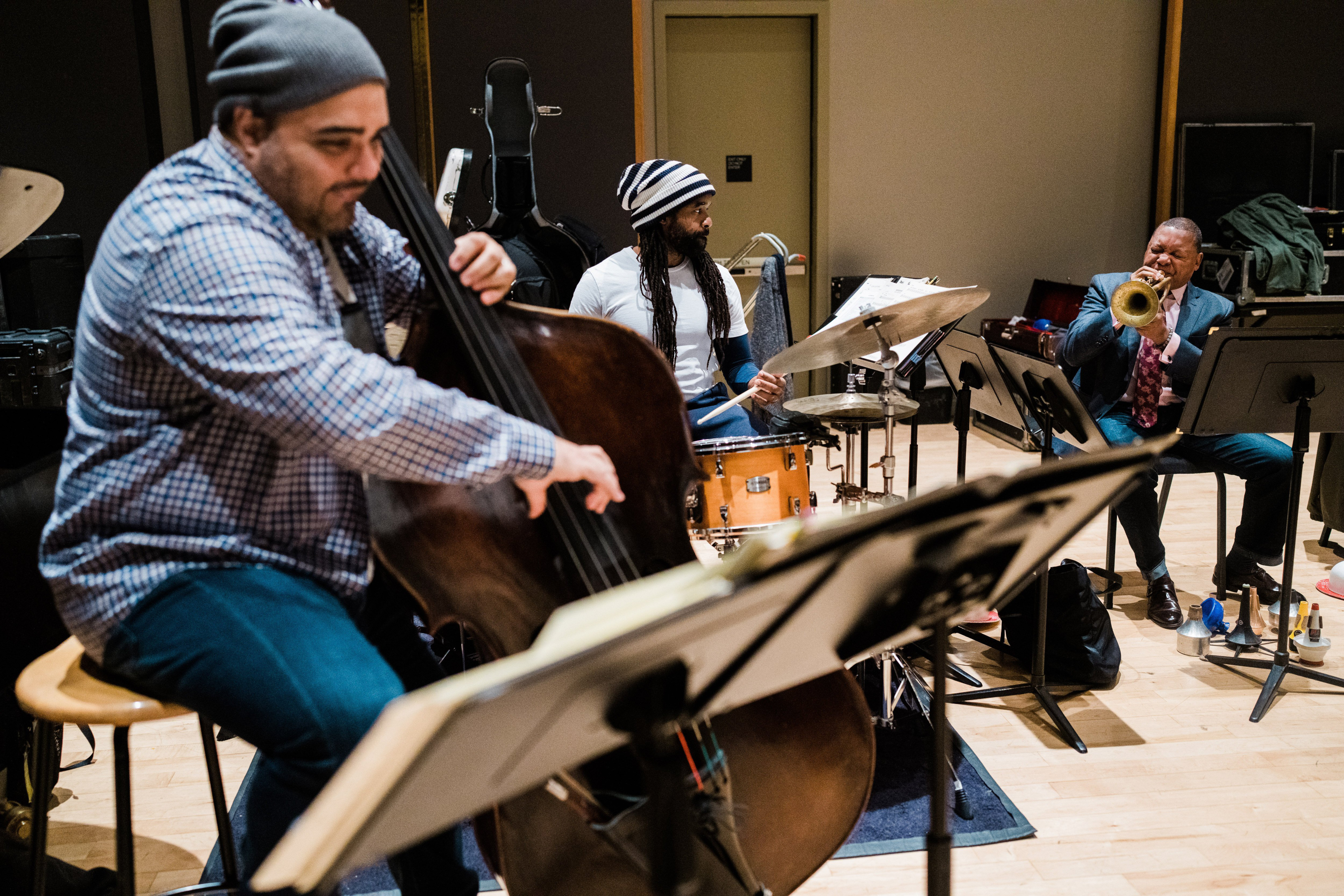 Carlos Henriquez, Obed Calvaire and Wynton Marsalis rehearse ahead of the “Wynton at 60” program in New York. (The New York Times/Gabriela Bhaskar)
FREEDOM, WITH STRUCTURE

Freedom within a structure, of course, separates Jazz at Lincoln Center from other major performing arts institutions with a repertoire. So does Marsalis' tradition of inviting young musicians to play on its biggest stage, the Rose Theater in the Columbus Circle complex.

"It shows the generations working together," he said. "When we started the orchestra, surviving members of Duke Ellington's orchestra played. Marcus Belgrave played with Ray Charles. Sir Roland Hanna played with the Thad Jones-Mel Lewis Orchestra. Jerry Dodgion and Frank Wess played with Basie. They passed on a lot of the feeling of the music and its identity and meaning to us. So, this is a continuation."

Chris Crenshaw, a trombonist, composer and arranger who has been in the orchestra since 2006, said, "We have a charge to keep. We have a responsibility. There's so many things in all traditions that have been passed down from generation to generation orally or with music."

The responsibilities that come with serving as the artistic director and public face of a major arts organization has meant that, for Marsalis, the shutdown was never truly a shutdown. He pulled out his phone and thumbed through dozens of photos of score pages for forthcoming projects (a tuba concerto, a bassoon piece).

Versions of the band have toured the United States and the world, taking endless covid-19 tests and often playing music from his politically engaged "The Democracy! Suite," which boasts song titles like "Sloganize, Patronize, Realize, Revolutionize (Black Lives Matters)." Streaming concerts, from the vault and some fresh, have abounded and will continue. This season, any concert can be streamed for a donation of $10. 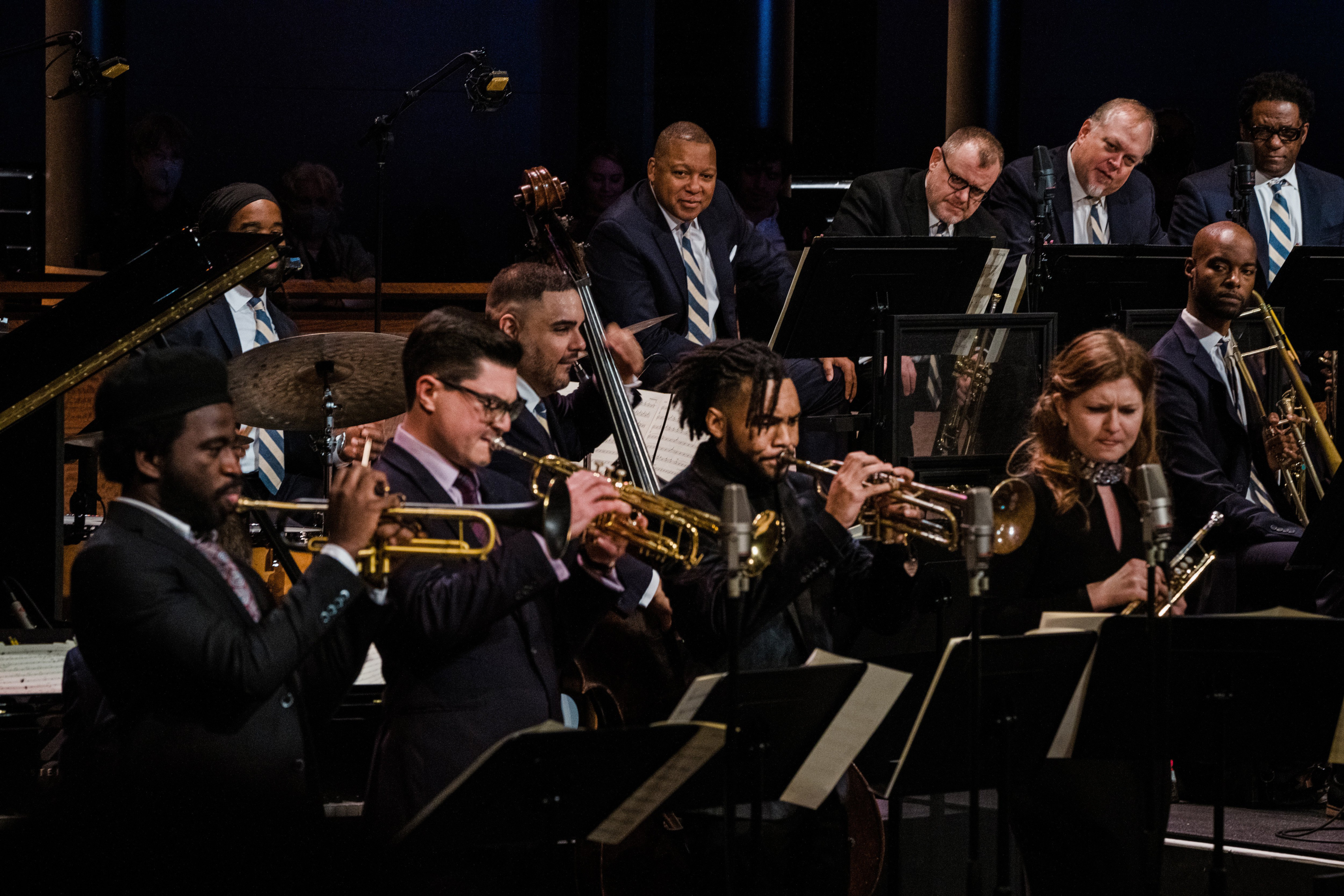 The Jazz at Lincoln Center Orchestra and its leader, Wynton Marsalis (center rear), returned to indoor performances with the Nov. 18 “Wynton at 60” event, which featured Marsalis originals and a quartet of up-and-coming trumpeters. (The New York Times/Gabriela Bhaskar)
LOSS OF LOVED ONES

The work helps distract from the losses that have mounted since March 2020, including Marsalis' musician father, Ellis, and his friend and mentor, critic Stanley Crouch, in addition to more musicians than any institution could fully memorialize.

"I tend not to dwell," he said. "My dad, he said, 'Everybody's losing people. And when you focus too much on yours ... '" He let that thought drift away and then recalled something pianist John Lewis once said to him. "'To focus too much on even something negative is a form of deep ego.'

"You got to keep moving forward, keep being productive and trying to create the world you envision," Marsalis added.

At 60, Marsalis, who won a Pulitzer in 1997 for "Blood on the Fields," his oratorio about slavery, sees a world in which democracy itself is imperiled, and "the intellectual class still always wants the Black man to be a fool on all levels." His humanism, though, buoys him.

"You can subvert the Constitution and make it harder for people to vote, make it more difficult for government to work," he said. "But there's always voices that defend the integrity of the document, which is changeable — it's not set in stone."

He shifted quickly back to the subject upon which he has most often stirred controversy.

Those young trumpeters, in his estimation, count among those voices. Jazz at Lincoln Center's mission has always focused on jazz education and advocacy, and the guest artists at "Wynton at 60" — Summer Camargo, Giveton Gelin, Tatum Greenblatt and Anthony Hervey — demonstrate the power of that outreach.

Camargo caught Marsalis' attention when her South Florida high school placed in the institution's annual "Essentially Ellington" contest, which invites school bands to record themselves playing free Duke Ellington charts and then brings the finalists to New York to perform. Now a Juilliard student, Camargo said she never would have attempted composition without the impetus of the contest, where, in 2018, she won awards for composing as well as for soloing.

"When people ask me what was one of the best days of your life, I always go back to that moment," she said. "Wynton took me backstage and gave me compliments and advice. He doesn't sugarcoat it; he tells you what you need to do to get better."

Gelin, a recent Juilliard graduate who self-released his debut album, also praised Marsalis' generosity as a mentor — and his practical advice. Visiting New York from the Bahamas during his high school years, Gelin attended a free Jazz at Lincoln Center Orchestra concert in Queens and afterward worked his way through the line to meet Marsalis. The next day, Gelin played for him at his home and was surprised that so famous a figure invested such energy in urging a kid to dig deeper into developing his own voice.

"I spent a lot of time in the Haitian church," Gelin said. "One of the first things Wynton said to me was to listen closely to the singers there and how their vocal qualities reflect where they're from."

Marsalis nodded when reminded of this encounter.

"Your sound will be organic when who you are doesn't fight with who you want to be," he said. 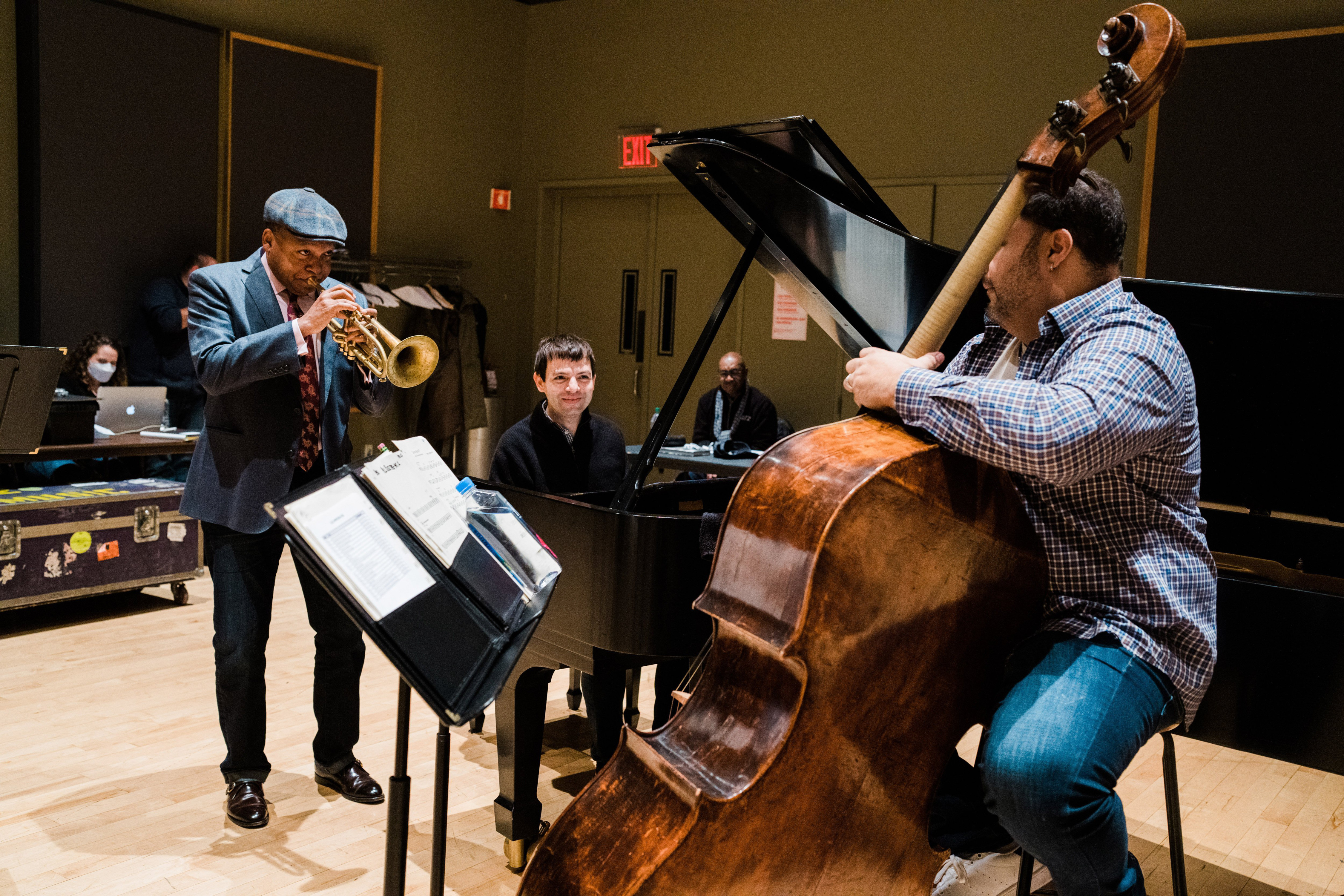 Wynton Marsalis (left) rehearses on Nov. 15 with Dan Nimmer (center) and Carlos Henriquez at The Jazz at Lincoln Center ahead of the “Wynton at 60” program, held three days later in New York. (The New York Times/Gabriela Bhaskar)
CROWD PLEASERS

On opening night Nov. 18, the four up-and-comers got their shot onstage. The orchestra's 90-minute set surveyed some of Marsalis' most crowd-pleasing compositions, including big-band stompers, ballads and percolating curios marked by his fondness for musical onomatopoeia, with muted horns aping the buzz of bees and the keening of train whistles.

The 15-member ensemble tackled "The Holy Ghost," from Marsalis' "Abyssinian Mass," and he delivered a bracing, unamplified solo on a quartet treatment of Gordon Jenkins' "Goodbye" that he dedicated "to all the people who have lost someone and didn't get to tell them goodbye."

But the most boisterous crowd response came soon after those young trumpeters took the stage. Camargo's gutsy opening solo brought patrons to their feet and inspired Marsalis — her hero — to muse afterward, "She ain't playing around at all."

The four ringers' joyous clamor brought the house down. Marsalis called their presence "a birthday present to myself," but their performances suggested it's not just a gift for him.