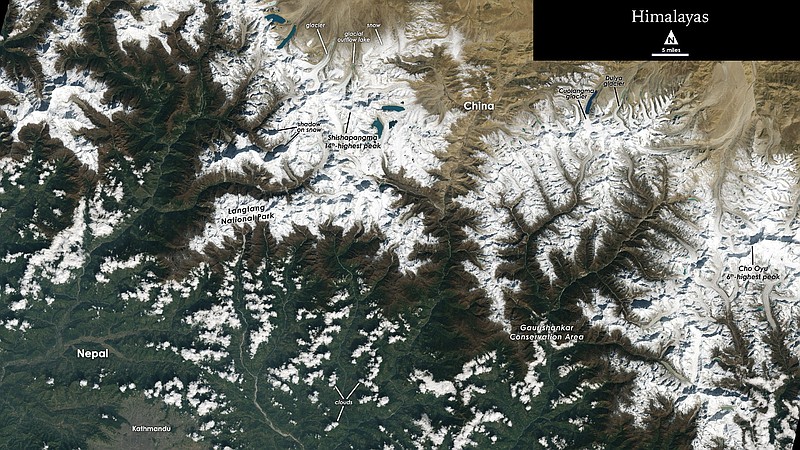 The Landsat 9 captured this image of the Himalayas on the border of China and Nepal. CREDIT: Courtesy NASA's Goddard Space Flight Center, USGS

The first images of Earth from Landsat 9 have been released this month, ushering in a new chapter in the longest-running continuous satellite program dedicated to Earth observation. The satellite, launched Sept. 27 from Vandenberg Air Force Base in California, is in the midst of a 100-day test period and will offer an ultra-detailed glimpse at changes in land use and natural resources.

Landsat 9 is primarily an update of its predecessor, Landsat 8, which was first launched in 2013. The Landsat program was introduced in July 1972 with the deployment of the Earth Resources Technology Satellite 1, later named Landsat 1.

[Video not showing up above? Click here to watch » arkansasonline.com/1128first5/]

The satellites have operated continuously since then, though Landsat 6 never reached orbit. The Landsat program is a joint venture between NASA and the U.S. Geological Survey.

"The incredible first pictures from the Landsat 9 satellite are a glimpse into the data that will help us make science-based decisions on key issues including water use, wildfire impacts, coral reef degradation, glacier and ice-shelf retreat and tropical deforestation," said U.S. Geological Survey acting director David Applegate in a news release.

In 2005, the family of satellites helped a researcher find a trio of unknown species in Mozambique. Landsat satellites have also been used in investigations as to why the Yellowstone fires of 1988 spread so quickly, to map glacial retreat, and even to research social and political change in Beijing in the 1970s and 80s based on patterns of urban development.

The Landsat satellite orbits Earth in slices that pass over the north and south poles, scanning narrower swaths of the planet from just 400 miles above the ground. That makes for exquisite resolution as fine as 30 meters in the visible and infrared wavelengths.

In other words, Landsat 9 could sense something happening on the scale of a third of a football field.

Landsat 9 has two instruments onboard that capture data.

One, called the Operational Land Imager 2, senses nine wavelengths of visible and infrared light. The other is the Thermal Infrared Sensor 2, which can detect subtle variations in temperature.

When combined, the two will be able to provide clues about agricultural health, water use and quality, wildfire size and severity, glacial health, forest health and the evolution of urban areas.

Scientists are particularly excited about an "underfly" event that just ended, during which Landsat 8 and 9 orbited in approximate tandem. In the past, NASA scientists worked to calibrate new satellites by comparing the images they took with those taken by previous satellites.

This time around, Landsat 9 flew about six miles below Landsat 8 during the five-day "underfly." Since both units have very similar sensors, the calibration should be seamless. The closest pass occurred on Nov. 14.

NASA noted that, through roughly Thanksgiving, Landsat 9 was working toward an orbital position opposite that of Landsat 8. Next, it will undergo two "ascent burns" to hoist it to the proper altitude.

Calibration and testing of Landsat 9 will last into January. Then, pending positive results, NASA will transfer control of the mission to the U.S. Geological Survey. From there, there's no telling exactly what Landsat 9 will help discover.