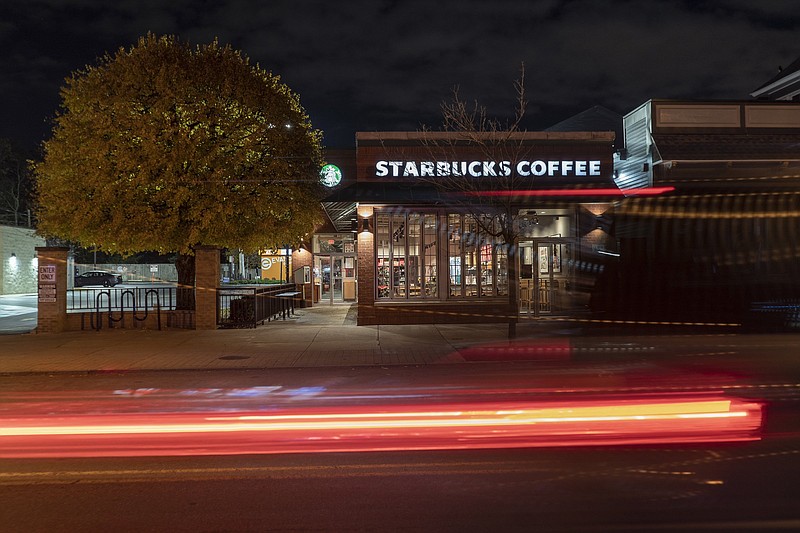 The Starbucks on Elmwood Avenue in Buffalo is one of three store locations voting on unionization. MUST CREDIT: Photo for The Washington Post by Libby March

BUFFALO -- Howard Schultz, the man who built Starbucks into a global giant, traveled to Buffalo this month for an unusual gathering of the company's employees.

Schultz talked about growing up poor in Brooklyn, N.Y., and about the values that guide Starbucks. The company is about much more than coffee, he told hundreds of assembled baristas: It is about humanity, community and love.

Right as he finished, Gianna Reeve, a 20-year-old shift supervisor, stood up and introduced herself. She held in her hand a set of voluntary principles for fair-labor organizing at the company. Schultz immediately left the room, escorted by a senior manager.

The faceoff between Schultz, a 68-year-old billionaire, and Reeve, a college student who began working at Starbucks last year, is part of a showdown that will reverberate nationwide.

Reeve is one of dozens of Starbucks employees in Buffalo attempting to form what would be the first-ever union at a corporate-owned Starbucks in the United States.

Starbucks opposes the effort and has intensified its campaign to persuade employees to vote against it. Three stores began voting this month via mail-in ballots, with results expected Dec. 9. Another three stores in Buffalo and one in Arizona also filed petitions to hold union votes. They're seeking to join Workers United, an arm of the Service Employees International Union.

"This is crunchtime," said Reeve. "You've got to start somewhere, and it's going to be Buffalo."

The fight over forming a union at Starbucks is a parable of generational change and the pandemic's impact on the labor market. It's also an illustration of the deep resistance to unions among employers, including companies that espouse liberal causes.

The unionization drive at Starbucks comes at a time of growing leverage for workers. Labor shortages have rippled across the country, and Americans are quitting their jobs in record numbers, whether out of frustration or in search of better opportunities. In recent months, there has been a notable increase in strike activity by unionized workers as well as fresh attempts to form unions by warehouse workers, museum staff and university instructors, among others.

"The pandemic really shook up what workers want and what they expect from a job," said Lane Windham, a labor historian at Georgetown University. "We're living in a moment of a new heightened awareness of workers' rights."

Unions are rising in public esteem. According to a survey conducted by Gallup in August, approval of labor unions is at its highest point in more than 50 years. The poll found that 68% of Americans and 77% of adults aged 34 and younger approved of unions.

"People are remembering, 'Oh, we have this tool that nobody has been using in a long time; let's dust it off and try to use it,'" said Windham.

Richard Bensinger, a former organizing director for the AFL-CIO who is working with the Starbucks employees, said he was surprised by the level of enthusiasm he encountered in Buffalo.

"I've never seen what we would call a hotter shop," he said. "It's a Gen Z-millennial uprising."

The union push started brewing before the pandemic. Some Starbucks employees watched closely as their fellow baristas at Spot Coffee, a cafe chain with locations in Buffalo, formed a union in 2019 and went on to negotiate a contract that substantially increased wages.

The working conditions since early 2020 and the ensuing labor shortage provided the final impetus. Starbucks employees in Buffalo say the pandemic brought not just daily risk of exposure to the coronavirus but also severe understaffing, combined with intense time pressures for orders placed via drive-through windows and mobile apps. They also wanted Starbucks to increase pay for its longest-serving baristas.

Working in food service means "you feel incredibly disposable," said Alexis Rizzo, a shift supervisor at a store near the Buffalo airport. In recent months, however, she could see that the hiring pools maintained by her manager were empty. "There's nobody to replace us," she said. "If we were ever going to do something, now is the time."

Several of the employees pushing for a union said they loved many aspects of the company and were grateful for its benefits, which include health insurance, stock options and free tuition for an online college degree from Arizona State University.

But they say a union is needed to give them a voice and hold the company accountable.

"It's delightful that I get free Spotify and a free pound of coffee each week, but I have [colleagues] who can't afford rent unless they work overtime," said Reeve, the shift supervisor who stood up at the end of the meeting with Schultz, the former chief executive of Starbucks and the company's largest individual shareholder.

Reeve said she was especially troubled by a reference Schultz made in his speech to the Holocaust. He said he was told that when Jews were taken to the concentration camps, they were given one blanket for every six people, yet most of them shared it with others. "So much of that story is threaded into what we have tried to do at Starbucks, is share our blanket," said Schultz.

Since employees began the unionization process in late August, Starbucks has flooded the 20 stores in the Buffalo area with personnel from across the country, and senior executives from headquarters have shuttled in and out of the city.

Rizzo began working for Starbucks six years ago at age 17. She had never seen any senior executives at the stores where she worked until September. Since then, Rossann Williams, the company's president for North America, has come to Rizzo's Starbucks -- one of those voting on a union -- at least a dozen times, Rizzo said.

When an executive who an employee knows only from company-wide training videos arrives in a store, "puts her hand on your shoulder and says, 'Tell me what is going on' -- I don't care who you are, that is frightening," said Rizzo, 23. That type of attention in the middle of a union campaign feels intimidating, she said, and younger employees worry their jobs may be in jeopardy.

Starbucks declined a request to interview Williams. In a letter to Starbucks employees, Williams said that she was in Buffalo to address "operational challenges" faced by the company's partners with "with humility, care and urgency." (Starbucks refers to all company employees as partners.)

This month, one of the unionizing employees filed a charge with the National Labor Relations Board, accusing Starbucks of engaging in a campaign of intimidation and surveillance. The employees also allege that Starbucks has attempted to dilute support for the union by more than doubling the number of staff at one of the voting stores.

Reggie Borges, a company spokesman, said Starbucks categorically denies the allegation that it intimidated or surveilled employees. The company does not believe it violated any laws in preparing the list of employees eligible to vote in the union election, he said. Starbucks sent personnel to Buffalo to respond to the issues raised by employees, said Borges.

The company has mobilized considerable resources. During a meeting in September, a Starbucks district manager in Arizona told other store managers in her region that she was joining a "huge task force" spending time in Buffalo, according to Brittany Harrison, one of the participants, who recorded the proceedings. If Buffalo "gets unionized it will be the first market in Starbucks history ... which is a really big deal," the district manager said. When asked if she is part of a last-ditch effort to stop the union, the district manager replied, "Yeah, we're going to save it."

The meeting was first reported by the New York Times. Harrison said the tenor of the gathering - where workers in Buffalo were characterized as people who "suck the life out of you" and "don't love Starbucks" - made her uncomfortable. The company opened an investigation into the leak of information from the meeting.

The unionizing employees face an uphill fight. Previous attempts by Starbucks baristas to form unions at company-owned stores -- in New York in 2004 and Philadelphia two years ago - have failed. In July, an administrative judge found that Starbucks had violated labor laws by retaliating against two baristas involved in the Philadelphia unionization effort.

Starbucks reported record revenue in the most recent quarter, driven by its U.S. business. Last month, it announced wage increases that will bring the minimum wage at the company to $15 an hour by mid-2022. The steps include raises of up to 10% for employees who have worked for the company for more than five years, a group Starbucks has not singled out before.

To argue that a union is not needed, Starbucks has held repeated meetings with staff in Buffalo. William Westlake, 24, a barista at one of the unionizing stores, said he was told to come to a mandatory meeting at a nearby Hampton hotel earlier this month, the day before the ballots were mailed out.

Nine people were waiting for him. They included two of the extra managers recently added to his store, a district manager, a human resources manager, an operations coach and Shannon Garcia, the senior vice president for U.S. operations.

For the next 45 minutes, Westlake said, six of them made the case for voting no to a union. They mentioned each of the benefits that Starbucks offers employees and said those "could all go away" if a union is formed, according to notes Westlake took of the conversation. In the face of such sustained pressure, he said, "the fact that we still even have a chance is a miracle."

Borges, the Starbucks spokesman, said that telling employees their benefits could change was an accurate description of the uncertainty involved in collective bargaining. He said the purpose of such meetings was to provide information about the unionization process.

One shift supervisor in Buffalo said that she was heartened by the way Starbucks had spared no expense to resolve issues at stores in the area, rushing in personnel, delivering needed supplies and renovating facilities. "They've really come at this from a perspective of, 'We can fix this. We can do better,'" she said. She spoke on the condition of anonymity because she feared a backlash on social media if she publicly opposed the union drive.

To form a union, a majority of the employees eligible to vote at any one store must vote yes in the NLRB election. The creation of a union is only the first step toward reaching a negotiated contract, something that is often a protracted process.

If the workers at Starbucks manage to unionize, it will be a symbolic success for organized labor that could inspire others, said Ruth Milkman, a sociologist at the City University of New York. But the numbers of employees involved remain small. "It's kind of a drop in the bucket," she said. Only 6% of American workers in the private sector are union members, down from 24% in the 1970s.

Employees such as Reeve say they're just getting started. She is working at Starbucks while studying psychology and gender studies at the University of Buffalo. She never imagined she could be part of a union, believing it was only for factory workers or teachers or nurses.

"I never thought it was something viable for service workers," said Reeve. "It's surprising in a fantastic way."