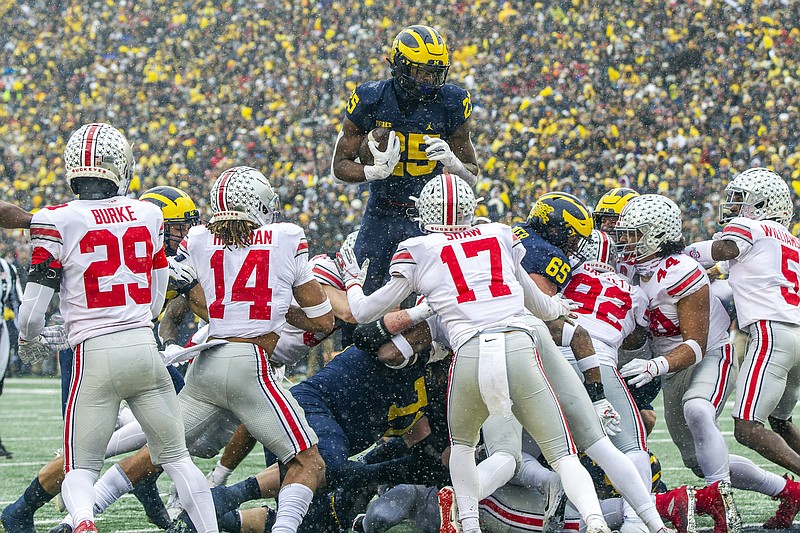 ANN ARBOR, Mich. -- Hassan Haskins scored five touchdowns, Aidan Hutchinson had three sacks and No. 5 Michigan beat No. 2 Ohio State 42-27 on Saturday to give Jim Harbaugh his first coaching victory over the Buckeyes.

The Wolverines (11-1, 8-1) won the Big Ten East and will play in the conference title game next week with playoff hopes in hand after snapping an eight-game losing streak to Ohio State (10-2, 8-1) .

Ohio State had a school-record winning streak in the rivalry, taking 15 of 16 to turn The Game into its game.

The Buckeyes blew their chances to continue their dominance with 10 penalties, many before the snap, and because they simply could not stop Michigan's running game.

Haskins had 169 yards rushing on 28 carries, scoring a go-ahead touchdown late in the first half and four more after halftime to pad Michigan's lead. Blake Corum returned from a two-plus game absence to run six times for 87 yards, helping the Wolverines gain a total of 297 yards on a ground against a rival that has pushed them around for much of this century.

STILLWATER, Okla. -- Spencer Sanders threw for a touchdown and ran for another and No. 7 Oklahoma State beat No. 10 Oklahoma to keep alive its College Football Playoff chances and stop the Sooners' streak of Big 12 titles at six.

Oklahoma State (11-1, 8-1) snapped a six-game losing streak to Oklahoma. The Cowboys will playBaylor next Saturday for the Big 12 championship.

BATON ROUGE, La. -- Max Johnson hit Jaray Jenkins with a 28-yard scoring pass down the right sideline with 20 seconds left, and LSU knocked off Texas A&M to give Coach Ed Orgeron a triumphant send-off in his final game in Tiger Stadium.

The victory gave LSU (6-6, 3-5) two consecutive wins to close the regular season as a bowl eligible team. The loss likely relegated Texas A&M (8-4, 4-4) to a less prestigious bowl while ending the Aggies chance for a first 10-win season since 2012.

In other games Saturday, Stetson Bennett passed for 255 yards and four touchdowns, two to tight end Brock Bowers, and No. 1 Georgia finished its undefeated regular season by overwhelming Georgia Tech 45-0. Georgia (12-0) posted its third shutout while giving up only 171 yards. ... Jack Coan threw two touchdown passes and ran for another score and No. 5 Notre Dame finished off the regular season with a 45-14 victory over Stanford to keep its playoff hopes alive. ... Blake Shapen threw for 254 yards and two touchdowns in his first start for No. 8 Baylor, and the Bears held off Texas Tech 27-24. Abram Smith ran for 117 yards and a touchdown for the Bears (10-2, 7-2 Big 12). ... Anthony Brown Jr. threw for 275 yards and two touchdown and ran for a score, and No. 11 Oregon beat Oregon State 38-29 to win the Pac-12 North Division and claim a spot in the conference championship game. ... Payton Thorne threw two touchdown passes and ran for another score to lead Michigan State past Penn State 30-27. ... No. 22 UTSA's undefeated season ended in a 45-23 blowout as North Texas running backs DeAndre Torrey and Ikaika Ragsdale combined for five touchdowns. ... Tanner Morgan overcame an interception that was returned for a first-half touchdown, leading Minnesota on three scoring drives after halftime to surge past No. 14 Wisconsin 23-13, take back Paul Bunyan's Axe and give Iowa the Big Ten West Division title. ... Clayton Tune threw for 301 yards and four touchdowns and No. 24 Houston completed its regular season with a 45-17 victory over UConn. ... Sam Hartman threw three touchdown passes and ran for a score to help No. 18 Wake Forest beat Boston College 41-10 for a spot in the ACC championship game. ... Will Shipley ran for 128 yards and a touchdown and Clemson's defense smothered South Carolina 30-0. The Tigers (9-3) matched the longest win streak in the series that they set from 1934-40.

In games involving SEC teams, Anthony Richardson came off the bench and led Florida to a 24-21 victory over rival Florida State that made the Gators bowl eligible a week after firing coach Dan Mullen. Richardson replaced turnover-prone Emory Jones early in third quarter and played significant snaps for the first time in a month. The dynamic freshman completed 5 of 7 passes for 55 yards, including a 5-yard touchdown to Justin Shorter that gave the Gators (6-6) some breathing room in a tight game. ... Hendon Hooker threw for 156 yards and two touchdowns and ran for 75 yards to lead Tennessee to a 45-21 season-ending victory over Vanderbilt. 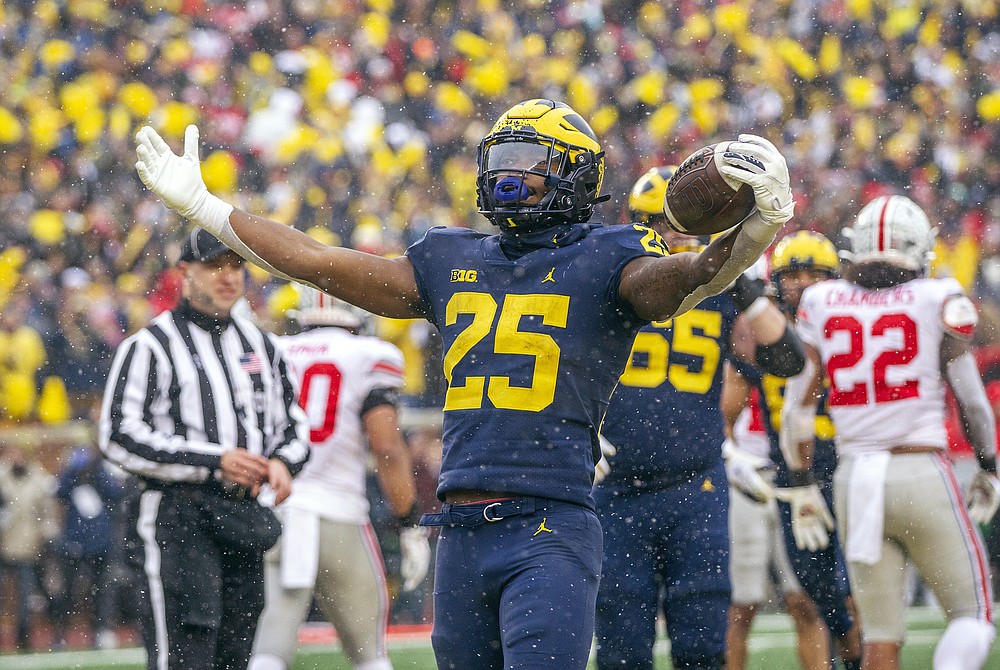