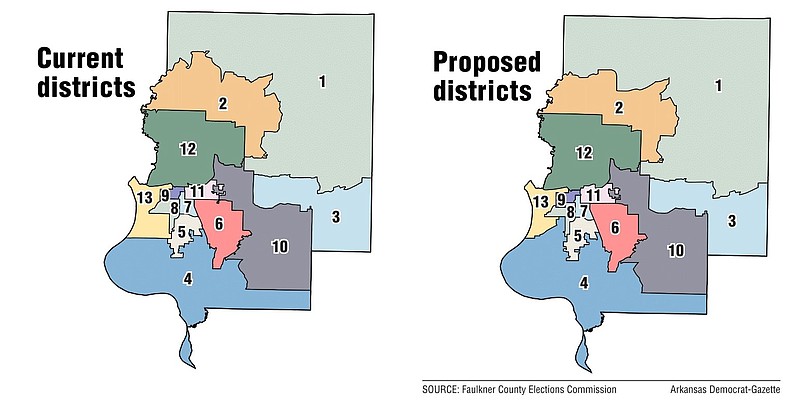 Faulkner County residents have 30 days to file objections to the proposed redistricting of the county's 13 justice of the peace boundaries, but county officials aren't expecting any contests since very little is changing in the plan.

"When the [U.S.] census comes up every 10 years, we're required to do redistricting," Jim Baker, county judge of Faulkner County, said. "There's not a lot of changes on the JPs' districts at all. It's not a big concern."

The Faulkner County Election Commission, which is responsible for the redistricting, held numerous meetings to receive public input before the proposed map was finalized.

Faulkner County, the fifth-largest of the state's 75 counties, remained in the 2nd Congressional District when the state Legislature redrew those districts earlier this year.

The state's population grew to 3,011,524 people over the past decade, making 752,881 the ideal population for each U.S. representative's district.

The Faulkner County proposed redistricting map does not knock any of the existing justices of the peace out of their current representative area, Baker said.

"I haven't heard any complaints about the new maps," Baker said. "Everything is spelled out and the lines are open. They did a good job. They had several meetings and the communication was kept open. I'm satisfied with it."

The 14 maps -- one for each of the 13 districts and a combined overview map -- can be viewed at www.faulknercounty.org/votefaulkner.com/index.php/2-uncategorised/25-approved-maps-for-redistricting.

The Faulkner County Election Commission approved the county redistricting plan at its Nov. 10 meeting. From there, the maps were filed with the county clerk, who then had 15 days to publish in the newspaper of record for the county.

Faulkner County Clerk Margaret Darter said she published the maps and notice on Wednesday in the Log Cabin Democrat. Residents now have 30 days to file objections to the plan with the Faulkner County Circuit Court.

The county clerk will then submit a certified copy of the new justice of the peace districts to the Arkansas secretary of state's office within seven calendar days immediately after the contest period.